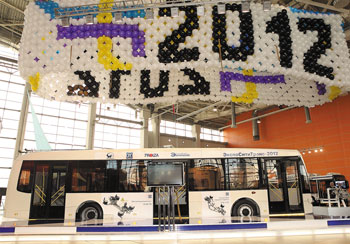 The first trolleybus to use ZF’s AVE 130 electric drive axle is a 12m design by Trolza, first exhibited in October 2012 at ExpoCityTrans in Moscow

The first trolleybus to use ZF’s AVE 130 electric drive axle is a 12m design by Trolza, first exhibited in October 2012 at ExpoCityTrans in Moscow

Unique to the design of the AVE 130 are two water-cooled asynchronous electric motors integrated directly into the axle near the wheels. Providing a total of 320bhp (240kW) of power, this layout saves at least 200 kilos in weight compared with a central motor design. In addition to the weight saving, the dimensions of the axle and the replacement of mechanical linkages by electrical power cables allow for greater flexibility in vehicle design. Components can be sited in alternate locations compared with a conventional bus, enabling wider aisles and a low, level floor for stepless passenger access.

The AVE 130 can be powered from a variety of sources: plug-in battery operation with or without a range extender, fuel cells, supercapacitors or overhead cables where the appropriate infrastructure is in place. In addition to emission-free driving, the AVE 130 axle offers further advantages in urban stop-start traffic. The high-torque electric motors can set a fully loaded bus in motion quickly, then switch to generator mode during braking to recover valuable electrical energy.

In field tests, more than 150 ZF electric portal axles have covered over two million kilometres since 2010. Extensive pre-production testing of the AVE 130 was carried out using the streets of Berlin as a live proving ground for 20 Mercedes-Benz Citaro buses equipped with the axles. Market confidence in the product is such that Moscow public transport authority Mosgortrans has already placed an order for ZF AVE 130 electric portal axles, to be used in a Trolza manufactured 12 metre, low-floor trolleybus design.

Equipping bus fleets with electric drivetrains in noise- and exhaust-sensitive towns and cities provides enormous potential for emissions reduction. By the end of 2013, many customer projects with the AVE 130 will be implemented and ZF is continuing to develop routes to market for the product. As an example, for vehicle manufacturers that currently use ZF’s conventionally driven AV 132 axle, no chassis redesign would be required to accommodate the AVE 130 electric axle.