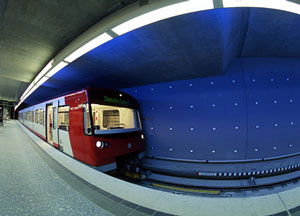 The capacities of mass transit systems can rarely be expanded to the extent actually necessary. In order to make more efficient use of existing infrastructure, metro lines are therefore being increasingly equipped with automatic train control and safety systems. The train and the trackside equipment now communicate with each other electronically instead of via signals. The current position of the train can be calculated to a precision of just a few meters, and the safety distance is maintained at all times.

Driverless operation therefore makes it possible to increase the capacity of a metro line by up to 50 percent because the trains follow each other at shorter intervals. In Nuremberg, automatic operation on the main line has cut the service interval to just 100 seconds – compared to the typical 200 seconds with a driver. If passenger volume is high – during major events, for example – additional trains can be deployed. These are automatically sent into operation straight from the depot or the sidings, enabling trains to be inserted at short notice into available gaps in the service schedule.

At the same time, the automatic, energy-optimized control reduces energy consumption in Nuremberg by up to 15 percent. An intelligent, energy-optimized running profile ensures that full use is always made of the journey time. Trains do not arrive “over-punctually”; instead, they adjust their speed automatically to avoid unnecessary energy consumption.