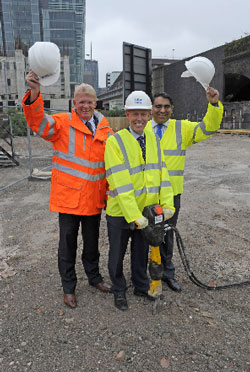 Unemployed Birmingham people are being offered the chance to fill dozens of new jobs being created by the £128 million extension of the Midland Metro tram system through the city centre.

Following talks with transport authority Centro and Birmingham City Council, contractor Balfour Beatty has signed up to the Employment Access Team (EAT), which aims to support the city’s jobless back into work.

The construction giant, which is building the extension, will take part in the EAT project over the next two years.

The programme works with key organisations including job centres, colleges and employers to connect jobseekers in the Birmingham area with employment, education and training opportunities.

As part of the scheme the firm has agreed to provide up to 1,000 weeks of employment over the course of the extension project which will see trams return to the streets of Birmingham in 2015.

Centro chief executive, Geoff Inskip, said: “The tram extension is a really important project for the people of the West Midlands and the future prosperity of our region.

“In the current economic climate, it is important that we look for ways to support people in their search for employment and it is great that we will be able to do this as part of this vital work.

“We already know that the Metro extension will boost our economy by £50 million a year and create 1,300 sustainable new jobs, so the news that even more jobs will be available for our residents is extremely pleasing.”

Balfour Beatty will make the jobs available for local unemployed people with the necessary skills to work on the extension.

The agreement also lays out that subcontractors must use local people to make up 75 per cent of their workforce.

The extension, which is a partnership between Centro and the Black Country and Birmingham City councils, will see a 20-strong fleet of new trams deployed on the existing Metro line between Birmingham and Wolverhampton from next year.

Councillor Tahir Ali, cabinet member for development, jobs and skills, said: “We are working really closely with employers to ensure than local and regional developments create job opportunities for Birmingham people, particularly young people who are struggling to find work.

“I am pleased that Balfour Beatty has made this commitment to improve access to work for Birmingham people.”

Balfour Beatty was appointed to build the extension last year after submitting a successful bid.

The extension will connect Birmingham’s two biggest railway stations – Snow Hill and New Street – to the Jewellery Quarter and beyond to the Black Country.

Bill Gifford, Director of Operations for Balfour Beatty said: “We have a long standing presence in the West Midlands, so we’re delighted to be delivering a scheme that will contribute so significantly to the region’s economic and social prosperity.

“We are also committed to helping build lasting communities, and as a local employer we want to make sure that throughout the duration of the project we’re helping to support those who are currently unemployed get back to work.”