Ministers say the new line will connect with 11 of the 12 other metro lines and provide new links to developments taking shape in Madrid’s suburbs. 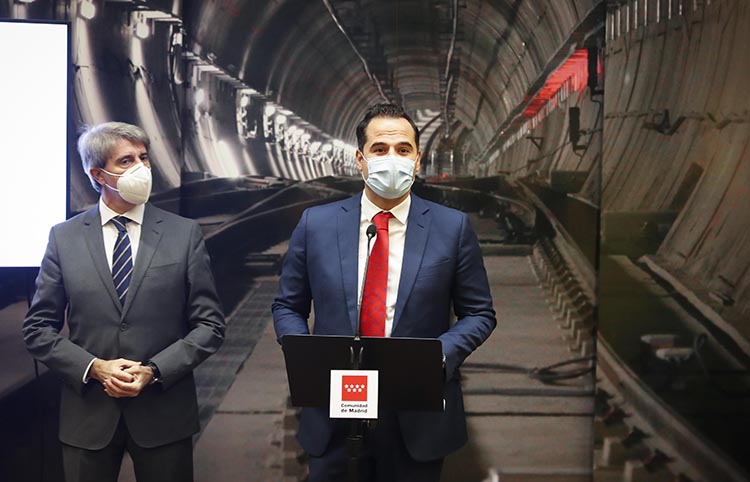 Regional Minister of Sport, Transparency and Spokesman for the Government of the Community of Madrid, Ignacio Aguado presented the plans for Line 11 this week. Credit: D.Sinova

The Madrid Metro has announced ambitious plans for Line 11 on its network, which ministers say will eventually link 11 of the 12 metro lines in the Spanish capital. The line will be 33.5 kilometres long and will cross the city from southwest to northeast, linking Cuatro Vientos with the new developments at Valdebebas.

This is an extension commitment made by the President of the Community of Madrid, Isabel Díaz Ayuso, in one of the projects the regional government presented to obtain financing from the European Union’s Recovery and Resilience Fund.

According to Vice-President, Regional Minister of Sport, Transparency and Spokesman for the Government of the Community of Madrid, Ignacio Aguado, and the Regional Minister of Transport, Mobility and Infrastructure, Ángel Garrido, the project “will connect eleven of the twelve underground lines, linking seven of Madrid’s transport interchanges and reaching strategic points for mobility, such as Madrid Puerta de Atocha station and Madrid-Barajas Adolfo Suárez Airport.”

Garrido added: “Madrid’s new Diagonal will be the line with the greatest potential in the entire Metro network. Its cross-sectional configuration makes it the most attractive, it is coherent with the evolution of the Metro network and responds to the needs of the people of Madrid, reducing travel time, minimising transfers, relieving other lines and, in short, promoting public transport.”

The project for the new Diagonal Line in Madrid will be executed in phases and will integrate the extensions that are already planned for Line 11 of the Metro, from Plaza Elíptica to the future Conde de Casal interchange; and the extension of the Metro to the new developments in Valdebebas.

In the southern section, the line will be extended from its current end in La Fortuna to Cuatro Vientos (with a connection to suburban trains and Metro line 10), and the already announced extension from Plaza Elíptica to Conde de Casal will be completed. In total, 18.3 kilometres will be built that include two new stations (Comillas and Madrid Río), the connection with Atocha Renfe and a large interchange in Conde de Casal for the entire A-3 tunnel.

The central section will link Conde de Casal with Mar de Cristal, with connections planned at Vinateros, La Elipa, Pueblo Nuevo and Arturo Soria stations. Possible further intermediate stops will also be considered. In total, this section will be eight kilometres in length and will connect with Metro lines 2, 4, 5, 7, 8, 9.

Finally, the 7.2 km northern section will connect Mar de Cristal with the new Ciudad de la Justicia station (that will also serve as an interchange with the Valdebebas suburban station), the T-4 Airport station and a new station in the northern part of Valdebebas. This section will connect the new developments in the northeast area of Madrid to the Metro of Madrid and replaces the initial project of a branch line from line 8.