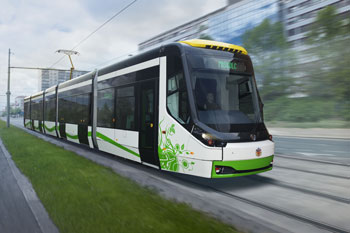 The newest tram manufactured by Škoda Transportation went out into the streets of Pilsen. It is a modern, fully low-floor tram 26T, which is designed for the transport company in Miskolc in north Hungary. It is possible to see it in the test operation from May 15th.

“Long 15 months after signing the contract our tram runs in the test operation in the streets of the city Pilsen. We were able to develop and produce a new tram that meets all the latest standards and it was in a very short time. The first two cars will be delivered according to the contractual terms to Miskolc until February 2014, the rest from a total of 31 of these trams will follow until February 2015,” says Zdeněk Majer, Vice President of Sales at Škoda Transportation.

The contract to supply thirtyone-low-floor trams for nearly two billion crowns was closed in the beginning of the year 2012. It also includes an option for ten years full-service for 175 million. Škoda Transportation defeated in the tender other European manufacturers of trams, namely the Italian manufacturer AnsaldoBreda, the Spanish CAF, Romanian Astra Vagoane and Polish Solaris.

The tram for Miskolc is based on the best tried and tested design solutions. It is a two-way five part with three fix chassis, two outer of them are powered and middle one is standard. With a width of 2.65 meters it is the widest vehicle produced by Škoda Transportation. During the construction of the vehicle by manufacturer there was an emphasis on minimizing the weight, installing the energy-efficient power generators and proven components with the aim to minimize vehicle operating costs. “The tram can hold more than 300 passengers, who can enjoy the air-conditioned vehicle and a modern information system including LCD screens. Of course there is also plenty of space for prams and handicapped passengers,” says Zdeněk Majer.

In addition to the technological advantages the tram offers also an interesting modern design. “We try to accommodate to our customers. For example, the colour theme of green flowers on a white background was chosen in a poll of Miskolc people who will use the tram every day,” says Zdeněk Majer. The tram 26T respects also the latest European safety directive EN 15227, which requires no threat to passengers or driver according to given collision scenarios.

Škoda Transportation supplied electric equipment for the Budapest metro in Hungary since 2007, trolley buses to Debrecen, Szeged and Budapest and now starts trams to Miskolc. The total value of the closed contracts for this country makes CZK 3.5 billion. “Škoda Transportation trams also run in Cagliari, Italy, in Riga, Latvia or in Wroclaw, Poland. There is the contract signed for 60 low-floor trams for the Turkish city of Konya this year. Currently we are preparing for a series of tenders for example in Germany, Italy, Turkey or Scandinavia,” says Zdeněk Majer.