Here we round up all of the latest development in sustainable buses around the world. In volume nine, a French project gets a funding boost and Aberdeen achieves a world first…

The world’s first hydrogen-powered double decker bus has officially been revealed in Aberdeen.

The arrival of the first of the zero emission, sustainable buses highlights the city’s role as the energy capital of Europe and shows its commitment to the transition of green energy from oil and gas as part of the Net Zero Vision. Part of a new £8.3million project, the buses have been funded by Aberdeen City Council, the Scottish Government, and the European Union (FCH JU), with an investment of about £500,000 per vehicle.

The hydrogen-powered double deckers can be spotted around the city for several weeks as they undergo a period of final testing along with training for drivers, with the buses expected to be in service from November 2020.

The European Commission has displayed its support of Île-de-France Mobilités’ and RATP’s (the state-owned operator of buses in Paris and the Île-de-France region) transition to environmentally-friendly mobility by dedicating €23 million in subsidies to the Bus2025 programme.

Bus2025 aims to convert every bus depot and a significant proportion of Île-de-France Mobilités’ RATP-operated bus fleet to electric or biogas by 2025. The financial aid comes from from the Banque des Territoires (Caisse des Dépôts Group) via the EC.

The multimillion-euro grant is part of an EU programme, the Connecting Europe Facility, to finance sustainable transport infrastructure. An RATP statement says that the funding reinforces the operator’s willingness to help make the EU Green Deal a success.

By 2022, 25 per cent of the public transit bus fleet in Qatar will have become electric, according to a statement from the Ministry of Transport and Communications (MOTC).

The electrified, sustainable buses will be used during the FIFA World Cup Qatar 2022, a move that MOTC says demonstrates Qatar’s commitment to clean energy solutions for transportation in the world and supporting the determination to host an exceptional, eco-friendly, carbon-neutral event. 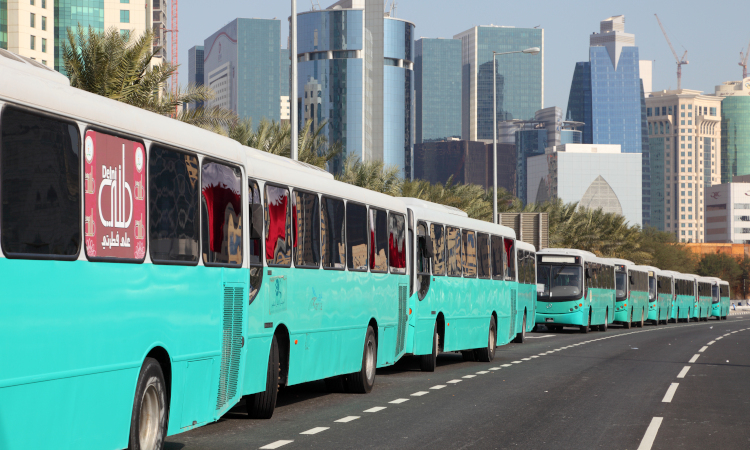 The Scottish Government has awarded over £9.75 million to 19 bus and coach operators to retrofit 594 vehicle exhausts in 2020/21 as it looks to reduce harmful emissions and air pollution.

The accredited retrofit technology helps reduce nitrogen dioxide and particulate emissions from older buses and coaches through the installation of specialist exhaust technology by accredited providers. These retrofits will achieve the latest Euro VI standard, which is the equivalent to emissions from a modern diesel bus. Transport Scotland and Energy Saving Trust will also be monitoring emissions performance from the retrofitted vehicles to ensure they perform effectively over time

The planned Clean Air Zone in the UK city of Leeds is no longer required, thanks to businesses switching to cleaner vehicles faster than expected. The conclusion was reached following a joint review by Leeds City Council and central government.

More than 90 per cent of buses and 80 per cent of heavy goods vehicles driven in the city now use cleaner Euro VI engines and therefore would not be charged if a zone was introduced. Meanwhile, nearly half of the city’s licensed taxi and private hire cars are also now hybrid or electric.

Because of the dramatic shift to cleaner vehicles, the review found that air pollution in Leeds on key routes is below legal limits and is not likely to exceed them again – even if traffic were to return to ‘normal’ levels or even slightly higher. A statement says that transport infrastructure improvements and the surging popularity of ultra-low emission vehicles in Leeds are further accelerating improvements to the city’s air quality.