Posted: 7 May 2013 | Transport for Greater Manchester (TfGM) | No comments yet

A major project to relocate Metrolink’s nerve centre to a brand new, 21st century facility has been completed seamlessly… 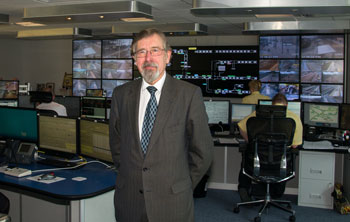 A major project to relocate Metrolink’s nerve centre to a brand new, 21st century facility has been completed seamlessly.

Metrolink has successfully completed the transfer of its main operational functions to its new Trafford facility on Warwick Road South.

Previously based at Metrolink’s Queens Road depot in Cheetham Hill, the control room – known as the Network Management Centre – is now located at the Trafford facility with the Customer Services team.

The move is an integral part of the ongoing expansion of the Metrolink network and will provide a stable foundation for the next raft of extensions to the network, due to be completed over the next few years.

It provides operational benefits that are key to the management of the network – including greater visibility of the system, both in terms of where trams are and CCTV at stops.

It also provides direct benefits for passengers, thanks to the integration of a customer services representative within the control room and new ‘back office’ facilities.

Chris Coleman, managing director of RATP Dev UK, which operates Metrolink, said: “The switchover to the new control room was a huge undertaking but proved to be a successful project delivered in partnership between us, contractors MPT and Thales and Transport for Greater Manchester.

“In the lead up to the move, rigorous testing of the system was carried out by staff between the end of service and the first tram the next day which ensured a seamless move over to the new centre of operations.

“As we look to continue with the ambitious expansion programme, it was imperative we had a stable platform from which to build upon our service to customers. With improved technology for our control room and customer services staff, we hope to achieve this.”

Councillor Andrew Fender, Chair of the Transport for Greater Manchester Committee, said: “This was no mean feat and the fact that the teams involved have been able to effectively move the entire nerve centre of the network from north Manchester to Trafford without having any impact on services is testament to the efforts of everyone involved.

“It’s a major step forward and crucial for managing a network that, in coming years, will be three times the size of the original. My congratulations go to the officers at TfGM and MRDL for delivering such a seamless transition.”