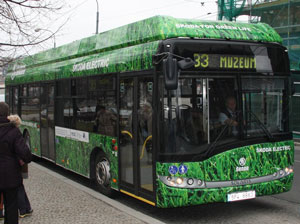 A new hybrid bus fully developed and manufactured in cooperation between Solaris and Škoda Electric started operating in the Western Bohemian city of Plzeň. Its advantage is the ability to use a battery drive which is environmentally friendly and has a significantly lower consumption than classical buses.

The new Solaris Urbino 12 Hybrid with electric drive from Škoda Electric is intended primarily for zero-emission areas in city centres. In Plzeň it is operated on a highly used line, where it can immediately show its potential.

“The electric bus is able to use a battery drive which does not emit any pollutants into the air and which moreover is silent. It thus constitutes an ideal means of transport for residential areas. Running on its battery and emission-free drive the bus can go as far as 10 km without the need of battery re-charging or the use of a diesel generator. This design is suitable especially for intensive traffic in cities with a high frequency of starting and braking at relatively slow speeds,” says Karel Majer, director of the Trolleybuses division at Škoda Electric.

The ability to save fuel by tens of percents constitutes a significant advantage of the hybrid bus. This is primarily the result of the recovery of electric energy which is produced during the braking of the vehicle.

“The energy is conserved in energy accumulators – batteries and supercapacitors – and subsequently it is re-used during driving. In the course of development significant attention was paid to the strategy of minimizing fuel consumption in all operation modes,“ explains Jiří Flajtingr, head of the hybrid bus project.

In order to start regular operation the vehicle had to meet a whole range of legal homologation conditions including demanding test drives which partly took place outside the common road network, at the TÜV testing centre in Úhelnice near Mladá Boleslav. It was necessary to prove and verify a whole range of technical parameters and Czech and European legal standards.

Solaris and Škoda Electric started the project of developing a new 12-meter long low-floor hybrid bus in 2009. The Faculty of Electrical Engineering at the University of West Bohemia in Plzeň also took part in the development, participating in the development of the hybrid drive unit of the bus.

The Solaris bus with the hybrid drive unit from Skoda Electric is already the fifth hybrid bus model in the manufacturer’s offer. Solaris was the first bus manufacturer to start mass production of hybrid buses in Europe in 2006. Since then, over 200 of these eco-friendly vehicles have been ordered by customers in Germany, Belgium, Finland, France, Lithuania, Norway, Poland and Switzerland.