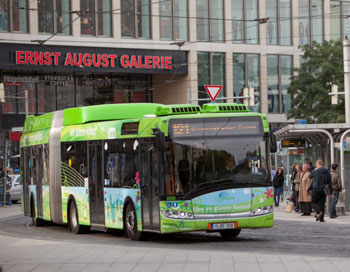 According to a contract signed with the city’s municipal operator üstra, Solaris will deliver twenty-six Urbino 12 Hybrid and sixteen Urbino 18 Hybrid buses to the city of Hannover. The delivery will be completed by 2016.

“We are very satisfied with our cooperation with Solaris. Solaris is as a trusted and innovative business partner whose products are distinguished not only by their quality, but also their competitive price. We value the company’s flexibility, customer focus and its after-sales service,” says André Neiß, üstra’s CEO.

“Solaris vehicles have significantly contributed to our fleet’s development over the past years. Their quality and reliability have been appreciated not only by passengers, but also drivers, mechanics and people responsible for the fleet maintenance. The contract for the delivery of 42 Solaris hybrid buses proves that the company is ready to adapt its state-of-the-art vehicles to customer’s needs and expectations,” says Wilhelm Lindenberg, member of the üstra management board.

The contract envisages the delivery of the vehicles between 2013 and 2016. This year, nine Solaris Urbino 12 Hybrid and the same number of Urbino 18 Hybrid will start the supply.

Hannover’s municipal operator üstra already runs 63 buses from the factory in Bolechowo near Poznań, of which 11 are Solaris Urbino 18 Hybrid. The recent contract is another large order from the German market, where Solaris have already delivered almost 2000 vehicles.

“I am glad that our long-standing customer continues to trust in us and has ordered the next Solaris vehicles. üstra is a role model for the industry in terms of its innovation strategy and constant development in the field of sustainable public transport. This contract is also a confirmation of our buses’ outstanding performance,” says Małgorzata Olszewska, Solaris’s member of the management board for Sales and Marketing.

Solaris was the first bus manufacturer to start mass production of hybrid buses in Europe in 2006. These eco-friendly vehicles, consuming up to 30 per cent less fuel than their diesel-engined counterparts are now operated in eight countries: Germany, Belgium, Finland, France, Lithuania, Norway, Poland and Switzerland. Solaris is the only European manufacturer to have five different models of hybrid buses in its offer, adapted to different customers’ requirements.