Approved and in Line-Service Operation: Four new articulated trolleybuses from Vossloh Kiepe and Hess for the French city of Limoges… 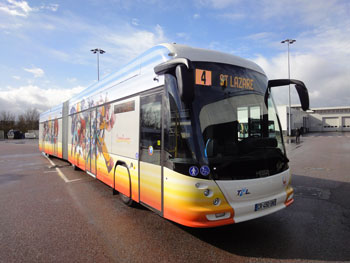 Approved and in Line-Service Operation: Four new articulated trolleybuses from Vossloh Kiepe and Hess for the French city of Limoges

The front design of the state-of-the-art trolleybuses of the type Swisstrolley 4 has been modified so that it is now similar to the front of a light rail vehicle. Vossloh Kiepe delivers the complete electrical traction equipment for the environment-friendly vehicles.

The four 18.7 metre long low-floor buses were ordered in 2011 and have now been handed over to the public transport company TCL after a short project work period of about 15 months.

The three-axle vehicles have got 41 seats and room for 105 standing passengers. The modern trolleybuses are powered by two 120 kW strong traction motors on the centre and rear axle, respectively. Moreover, the vehicles have a diesel generator unit as an emergency power unit. The kinetic energy released during braking is converted into electrical energy, which is recuperated to the overhead contact line system and made available to other vehicles. The dual-axle drive was introduced for the first time ever in France within the scope of the Limoges project.

The direct pulse inverters in IGBG technology are included in the scope of supply of Vossloh Kiepe. Moreover, the Düsseldorf company delivers the on-board power supply system, which e.g. supplies the air conditioning systems for the driver’s cab and the passenger compartment, as well as the braking resistors, the compressor units and the touch voltage relay EBW.

The modular current collector system OSA 500 has been adapted specifically to the infrastructure in Limoges. Thus, there is the rather unusual width of 80 cm between the positive contact wire and the negative contact wire of the overhead contact line system in Limoges. Furthermore, the height of the overhead contact lines differs extremely as it varies between 3.8 m and 7 m, which also had to be compensated. Moreover, a camera has been fitted on the trolleys to make it possible for the drivers to see the points being passed. The trolleys are moved automatically for the wiring up by way of wiring units fitted on the overhead contact line. The actual wiring up is triggered at a push on a button.

Vossloh Kiepe has not only supplied Limoges with trolleybuses. Already in 1999 the company delivered trolleybuses to Lyon in the southeast.