On top of ‘Operation Respect,’ New York’s MTA is now piloting mask dispensers on buses as a way to protect those using public transit. 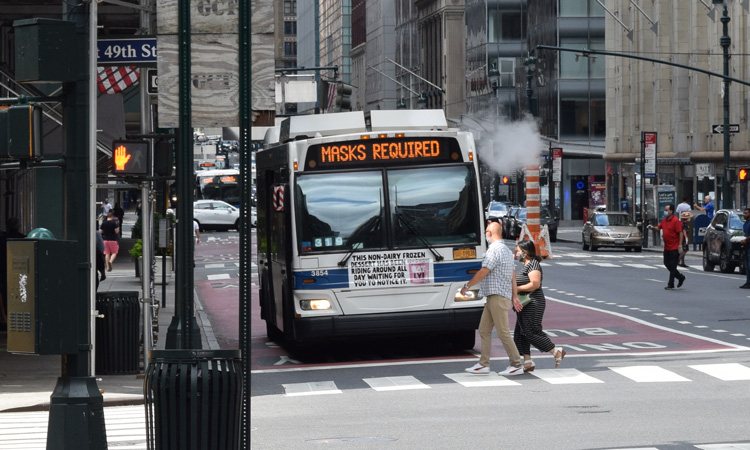 New York’s Metropolitan Transportation Authority (MTA) has announced that it has launched a pilot to mount dispensers of free surgical masks inside buses to protect customers while on board. The MTA has already completed the installation of dispensers on 100 buses on six bus routes in three boroughs.

The MTA plans to roll out the pilot across every borough on more than 20 routes and 400 buses by the end of August. All customers and MTA employees are required to wear a mask while riding public transit.

“This is another important way we are coming up with solutions to ensure customers can conveniently obtain a mask if they have lost or forgotten their own when they board our buses,” said Craig Cipriano, President of the MTA Bus Company and Senior Vice President of Buses for MTA New York City Transit.“When you wear a face covering on public transit you’re doing so out of respect for your fellow passengers and the health and safety of our bus operators – plus it’s the law.”

Each plastic dispenser holds approximately 50 surgical masks and will be refilled daily.

The announcement follows the launch of “Operation Respect,” a new MTA initiative consisting of a “Mask Force” of volunteers to distribute masks directly to customers throughout the subway, bus and commuter rail system.

A survey conducted by the MTA of more than 15,000 bus riders between 13 July and 16 July found more than 95 per cent of riders were wearing a face covering while riding on public transit. To further encourage and promote mask compliance, the MTA has deployed approximately 160 MTA Bridge and Tunnel Officers throughout the bus system to communicate with riders. The officers will also be conducting spot checks on board and instruct riders who are out of compliance to leave the system.

Across agencies, to date, the MTA has distributed 5.2 million masks, 7.3 million pairs of gloves, 50,000 gallons of hand sanitiser, 4.5 million individual sanitising wipes, 145,000 gallons of cleaning solution and 10,000 face shields to its frontline employees.