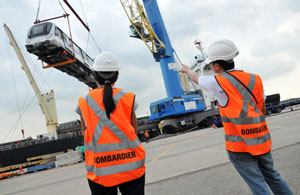 Deliveries will form part of the existing contract delivery of the Downtown Line (DTL) project and are expected to end in 2016. The new metro cars will be assembled at the facilities of Bombardier’s joint venture, Changchun Bombardier Railway Vehicles Company Ltd, in Changchun, China. With the new order, a fleet of 264 fully automated MOVIA metro cars will run underground on the world’s longest driverless mass rapid transit line at 42 km.

“Our MOVIA metros will shape the future of Singapore mass transit travel at a time when many more people in the city are expected to shift to this stylish, efficient and reliable mode of transportation,” said Kristian Mikkelsen, President of Rolling Stock Asia, Bombardier Transportation. “We look forward to a long and successful relationship with LTA and appreciate the collaboration and teamwork demonstrated during the project delivery. We are committed to offering the highest levels of quality, performance and reliability to help improve connectivity on Singapore’s rail network. To date, we have delivered five trains within schedule under the DTL project.”

Bombardier’s expertise as a major supplier of metro cars is evident around the world, with more than 3,900 MOVIA metro cars ordered to date. Every year, Bombardier metros transport more than 7 billion people in cities like New York, Montréal, Toronto, Paris, London, Berlin, Bucharest, Stockholm, Shanghai, Shenzhen, Guangzhou, New Delhi and many others.

The MOVIA metro vehicles integrate the world’s most advanced technologies in metro vehicle manufacturing, such as stainless steel carbodies and the reliable BOMBARDIER MITRAC propulsion and control system featuring IP technology. The MOVIA metros are developed from a standardised platform, which ensures a high degree of reliability, safety and maintainability while providing low life-cycle cost. Original, stylish and fully accessible, the MOVIA metro offers values and services that are second to none.