During the last decade in Poole in the county of Dorset on the UK’s south coast, the number of bus journeys has almost doubled – the highest figures seen outside of London. The Borough of Poole’s Accessibility Team Leader, Nick Phillips, explains that this patronage has increased due to the successful working-ethos of the Quality Bus Partnership, plus the success of real-time passenger information systems which travellers have rated as being an important factor for them to choose bus travel. 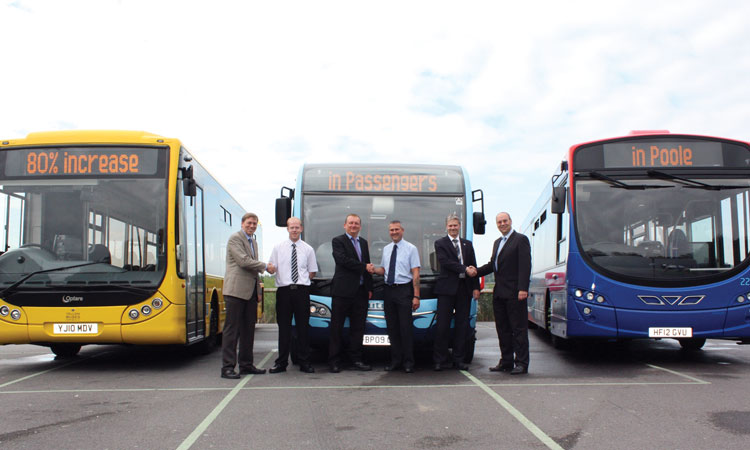 Poole is an expanding UK town of almost 150,000 residents on Dorset’s sunny south coast. It is famous for having Europe’s largest natural harbour and a busy developing Port for both passengers and freight. It is also a popular tourist destination with three miles of unspoilt golden beaches, including Sandbanks peninsula.

However, Poole is also famous for delivering the highest percentage increase in bus patronage over the last decade (outside of London). In the last 10 years, the number of journeys by bus has almost doubled from 5.3 million in 2004/2005 to 10.2 million in 2014/2015. This has been achieved despite being in an area with high car ownership and increasing traffic congestion, particularly in the summer months.

The key to this success has been a voluntary Quality Bus Partnership (QBP) with the major operators (Go Ahead’s Morebus, RATP subsidiary Yellow Buses and First), plus the three neighbouring authorities of Poole, Bournemouth and Dorset.

Originally signed in 1999, the ethos of the QBP is that “by working together, more significant improvements can be made than working independently”. The aim of the partnership is to create a ‘virtuous circle’ of improvement with the councils investing in infrastructure (high quality shelters, real-time passenger information and bus priority) to support commercial bus operation. In return, the bus operators have increased frequencies and invested £2.7 million in their fleets to give an unrivalled daytime service of 24 buses per hour on the main Poole to Bournemouth route.

The QBP is a delivery group (and not a talking shop) with members providing a prioritised ‘wish list’ of capital schemes to create the right environment for commercial bus networks to flourish. This includes new bus lanes, interchanges, extended stop clearways and improved enforcement through the use of camera cars.

From the outset, the considerable value of a real-time passenger information (RTPI) system was recognised. The passenger’s end-to-end journey experience is significantly enhanced by the information shown on both shelter and in-bus displays. The operator’s myriad benefits of day-to-day fleet management, schedule adherence and driver:inspector voice communications were also essential to improve reliability of services overall.

Poole’s 2001 bid for Department for Transport (DfT) funding to kick-start the RTPI project was successful, with the contract being awarded to Action Information Management (now part of the Trapeze group). The system was originally PMR-based with two radio masts and a maze of supporting communications links. The project attracted significant additional public and private investment and became one of the largest and most successful in the country, with 259 buses tracked and 198 displays at the busiest bus shelters across the conurbation. Departure screens were also fitted in foyers at key hospitals, supermarkets, leisure centres, universities, offices and transport hubs.

The system has been at the forefront of new technology, with RTPI to mobile delivered in 2007 (the first in the South West). The introduction of new low-floor buses with luxury seating, CCTV and smartcard ticketing, plus the complimentary infrastructure improvements have attracted new segments of passengers for whom the bus is a mode of choice. These passengers have rising expectations and the ability to check, first via mobile, how the bus is running was seen as invaluable – the system attracted 30,000 text enquiries in its first year.

In 2011, Poole was the first in the country to install bus stops with NFC tags to give real-time via passenger smartphones. This again puts customers in control of their journeys, giving real-time information at all stops (not just those fitted with displays) and maximising the benefit of the system overall.

The ability by operators to accurately quantify the effects of congestion through the RTPI system has been a significant benefit to all partners. This information has been used to identify hotspots and justify capital investment in finding a solution. As an example, the Civic Centre ‘bus bypass’ scheme has been delivered after it was shown that up to 4 minutes could be saved for buses travelling west on the main Bournemouth to Poole corridor. This time saving benefits 260,000 passengers each month, but also saves operators 18,000 unnecessary bus miles and 3,000 gallons of fuel each year.

In 2012, the DfT announced that the Borough of Poole (in partnership with Bournemouth and Dorset County Council) had been successful in winning both Local Sustainable Transport Funding (£12.1 million) and Better Bus Area Funding (£3.4 million). For public transport users this would provide “a package of targeted measures to maintain the momentum of significant bus patronage growth in the conurbation”.

This opportunity provided the resource to re-engineer the existing RTPI system, plus provide a step-change at the roadside for passengers. The procurement was led by Poole for the conurbation and split as follows:

After an OJEU procurement process the contracts were awarded to the following successful tenderers:

All upgrades have now been completed. The ease of migration to GPRS for the RTPI base system was undoubtedly assisted by the fact that the local authorities and operator were previous customers of Trapeze.

Splitting the contracts as shown, provided particular benefits for the delivery of RTPI infrastructure at the roadside, with a single supplier solution for both the shelters and displays providing turnkey delivery. This also solves previous potential problems of multiple inspections/cleansing/electrical testing and fault reporting.

Over 90 stainless steel Landmark shelters have now been installed and excellent feedback has been received from the public who appreciate the light and airy glass roofs and full width seating in particular. Clearchannel (through partner RSL) have successfully delivered over 120 full colour TFT displays, with significantly improved content. In addition, 120 mid-life LED signs have been upgraded to the latest communications and re-installed, allowing an increase in the number of shelters fitted overall. Journey planning kiosks and off route monitors have also been replaced/upgraded.

Fundamentally, the revised solution ringfences advertising revenue from the shelter contract to provide ongoing support for maintenance of both the shelters and displays. This is of particular importance as local authority revenue budgets become further reduced in the future.

The value of RTPI in the conurbation was shown by a recent survey of 800 residents, which rated real-time information as the third most important factor in encouraging people to use buses more (after improved reliability and cheaper fares). This backs similar research undertaken by Transport Focus. RTPI therefore remains an essential tool for local authorities committed to cutting carbon and congestion by securing modal shift to public transport.

Nick Phillips graduated with an Honours degree in Transport Management from Aston University and has enjoyed an interesting and varied career in the industry ever since. Nick has worked for the Borough of Poole for the last 12 years and currently leads the Accessibility Team. Responsibilities include development of public transport (bus, rail and taxi licensing) community transport and walking and cycling. The public transport remit includes close partnership working with local bus operators to secure modal shift. This has been particularly successful in Poole, with increased ridership during the last decade – one of the highest patronage increases recorded in the country. Nick project manages the Real-Time Information System for the Poole/Bournemouth conurbation and the system has recently been fully upgraded following the award of the DfT’s Better Bus Funding.