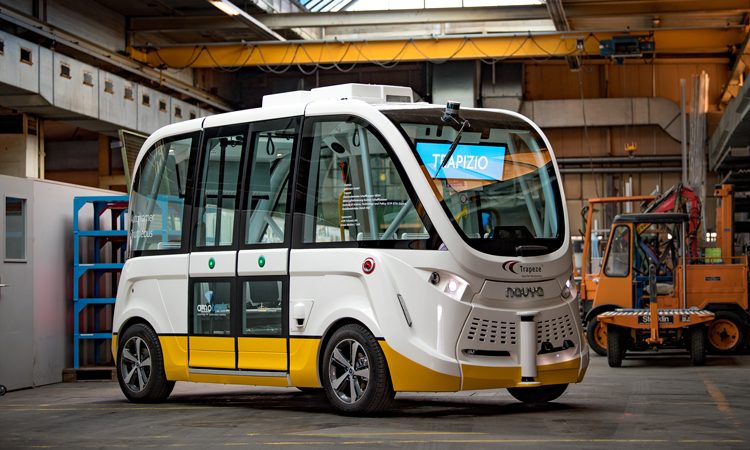 One of the most promising developments in the public transportation sector is the use of driverless or autonomous shuttle buses. Much has been made of recent tests of these vehicles in places like Las Vegas, but beginning in 2018, a small town in Switzerland appears to have beaten the rest of the world in the race to integrate an autonomous shuttle into their regular public transportation system.

CNN News reported1 that the town of Neuhausen Rheinfall, Switzerland started operating a Navya autonomous shuttle in March 2018 on their regular service route. Passengers can now take the autonomous shuttle on Route 12 to the Rhine Falls, the largest waterfall (by volume) in Europe, which receives 1.5 million visitors annually.

Keen to personally see the shuttle in full operation, and to see the end results of Trapeze Switzerland’s efforts with the local transit authority, I found myself on my way to Switzerland.

I arrived in mid-July 2018 to see how the service, the first of its kind integrated into mixed traffic, came about. I was able to ride the shuttle, talk to the staff and gather an idea on what is next for public transport and autonomous vehicles.

Incorporating autonomous vehicles into regular transport service is a significant undertaking. When Peter Schneck, CEO of Trapeze Switzerland, heard local customers’ interest in autonomous technology, he saw the potential for it to be a supplement for public transport.

What made this technological advancement possible was the coordination of multiple organisations. The regional state government of Schaffhausen, the public transport authority of Schaffhausen – Verkehrsbetriebe Schaffhausen (VBSH), technology company AMoTech2 and Trapeze, forced this project to life. The Swiss Transit Lab3 was created to pull these partners together (plus others including academic institutions and supplier companies), to study and share outcomes from industry solutions and pilot programmes.

Led by its Director and CEO, Bruno Schwager, VBSH worked with AMoTech, Trapeze and Navya to set up the route for the vehicle and integrate Trapizio into their regular service route.

Alexander Schulze, Senior Project Manager with AMoTech, explained that the first hurdle was getting the local government certification/license to operate the shuttle on regular roads in mixed traffic. The license was granted after a full review of the technology and vehicle, but only for the route specified.

Marcel Seelhofer, the COO of VBSH, showed how the vehicle is integrated into their urban route network in the operations control system/dispatch software along with live footage from cameras inside the vehicle. The Trapizio vehicle shares some of its stops with the trolley buses, which always have priority. The operations control system coordinates the timing. Seelhofer noted that they were very pleased with the autonomous shuttle and, at the time of my visit, it had boarded over 8,000 passengers.

Marcel Seelhofer, COO of VBSH, tells Paul Comfort about the traffic management system installed at VBSH's control room, and how the autonomous shuttle factors into it.

Passengers get on and off for free without issue, pushing the door button to open or close it once the vehicle comes to a stop. Trapizio has on-board sensors allowing the identification of any obstacles and causing the vehicle to come to a stop. This happened several times during the route as pedestrians or bicyclists moved in front of the travel path. The shuttle turns slowly into the bus stop but can pick up speed along the route, up to 10mph. As noted, Route 12 intersects with other 40-foot buses/trolleys for timed transfers at specific bus stops.

The vehicle is a source of great interest to many sightseers who photograph and videotape the bus along its route.

Trapizio can carry 12 passengers (eight seating with four standing). There isn’t a driver, but there is an attendant, or steward, on the vehicle at all times to welcome passengers on board and explain how the vehicle operates. The steward also has a hand-held vehicle controller to use, if necessary.

The on-board attendant said passengers were happy and amazed with the ride. A local university is conducting a passenger feedback survey and the results will be available online through the Swiss Transit Lab website.

The autonomous shuttle operates well in a busy urban environment mixed into regular traffic (bus, auto, bike and foot alike), so well that the local authorities are gearing up for an expansion.

The expansion will bring another Navya vehicle into service onto a new Purple Line which will take passengers right along the tourist trek by the Rhine Falls shops. On this route, the vehicle will maneuver a 15 per cent slope, so a four-wheel drive vehicle will be ordered for this part of the service. There is not enough room for the vehicle to turn around at the end of the line so it will stop and what was the rear of the vehicle becomes the front to return along the same path.

The autonomous shuttle aims to complement and strengthen the existing transport service by bringing local public transport closer to the passengers and their needs. It can be seen as an effective first- and last-mile solution for passengers. If this is accomplished, these passengers will not need to drive their cars to get to and from public transport stations.

For this service to be successful, it required full support from state and local government, the transit operator and technology providers. This three-legged stool of collaboration is fostered through the Swiss Transit Lab. Serving as a Centre of Excellence for transport and mobility in the region, the Swiss Transit Lab provides a roundtable for all three of these institutions to work together. Additionally, cooperation with academia and the public allows the Swiss Transit Lab to share the learnings from this important first step into the future of mobility. This approach could be a model for other transport systems throughout the world to begin phasing in autonomous vehicles into their regular route service.