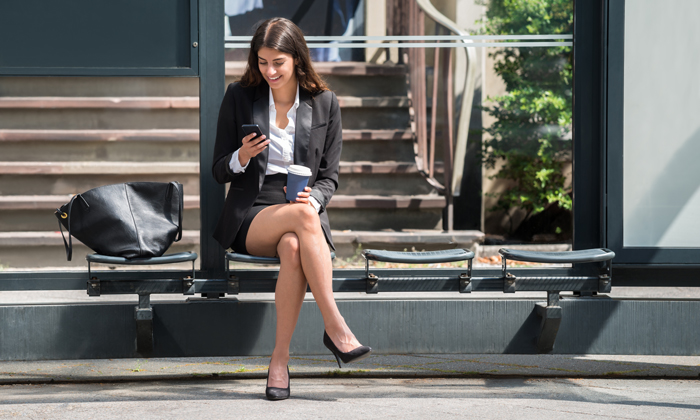 In April 2016, the RTC launched its CAD/AVL system ‘Real Time Nomad’, developed by Engie Ineo, together with the new ‘Nomade’ application for passenger information in real-time (available on iOS and Android).

After a year of hugely successful use, the Nomade application received an award from the Canadian Urban Transport Association (CUTA) for quality and innovation. And now new features are about to be released with passengers now able to create personalised alerts on their mobile phone to be warned in real-time when a bus is arriving at their stop. The alert generates a push notification on the phone together with vibration and sound.

The alerts can be customised by route, departure stop, arrival stop, departure time, alerts threshold and day of the week. 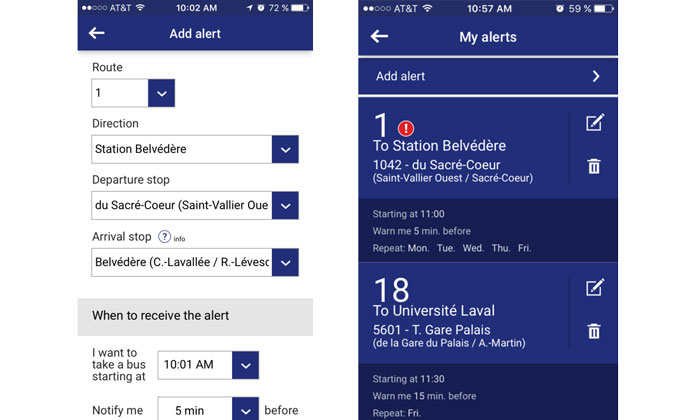 The new functions on the Nomad application complete the already existing range of RTPI solutions that Engie Ineo has implemented in Quebec City where each bus is equipped with on-board TFT screens for next stop information, time to reach the next stops, and accessibility for people with disabilities.

Audio announcements, internal and external, are performed through text-to-speech to announce the next stop, the route number and direction. 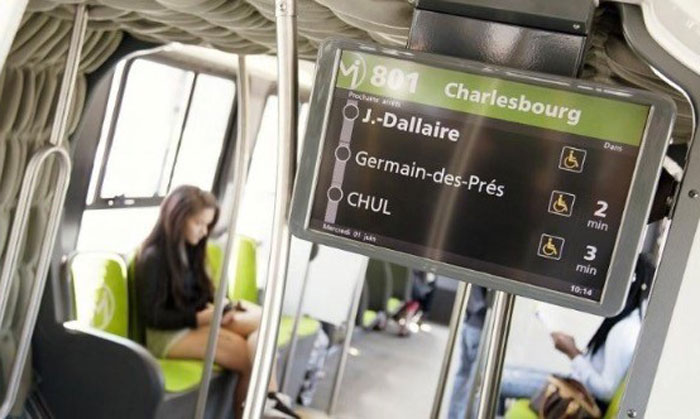 50 LED displays are also installed at selected bus stops with two and four lines displays which depict visual next bus information, together with a push button for visually impaired people, announcing the next bus arriving at this particular stop.

TFT technology displays have also been installed on temperate stations (covered stations that keep passengers heated while waiting for their bus during the winter season). 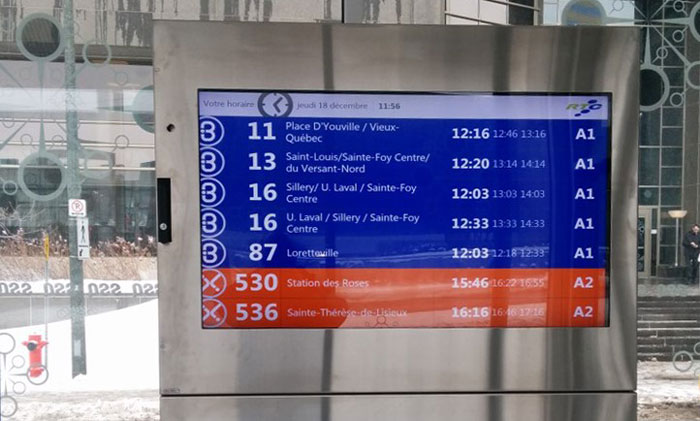 TFT display in a temperate station, displaying next bus information for several routes

All of these applications have clearly been fully accepted by the travelers on the RTC territory with over 45,000 downloads of the app in less than two months after the launch.

Some of the latest developments includes an intuitive, easy-to-use, web-based content management system. This tool includes not only real-time passenger information, but also service updates and disruption information, letting passengers know about any issues or delays they might encounter. Weather, news, third party feeds and video are also part of the solutions, creating a more attractive environment for travelers. This solution has also been deployed in the City of Gatineau, in the Quebec region.

“Passengers are the heart of public transport, informing them accurately is essential to keep them riding”

“Passengers are the heart of public transport, informing them accurately is essential to keep them riding but also to expand and attract new passenger. That is why Engie Ineo is developing innovative solution providing reliable and customized real-time information for ensuring a more fluent mobility,” commented Philippe Gaborit, Sales Director for the Europe and Africa.

In the past few years, public transport has become multimodal and passenger information has followed that trend by informing passengers not only about bus and train, but other forms of transport too. Travellers can be informed about the number of bicycles available at the next stop, or about the next ferry departing when the water bus is part of the transport offering.

One of the next steps will be to integrate the ever-growing autonomous vehicle mode into the passenger information world.

Technology is moving fast, and Engie Ineo is dedicated to accompanying public transit agencies and operators into a better and smarter mobility for today and tomorrow.