The importance of public transport in Latin America

Posted: 3 May 2016 | Eleonora Pazos, Head of the Latin America Division, UITP | No comments yet

A quick walk through the centre of any large Latin American city will be enough to establish who rules the urban space. While approximately 100 million cars (one for every five people) are used on a daily basis, public transport has been losing ground each year. Users frequently experience inadequate public transport operations with often overcrowded systems, resulting in extremely poor quality services. However, public transport remains an important mobility alternative for millions of citizens… 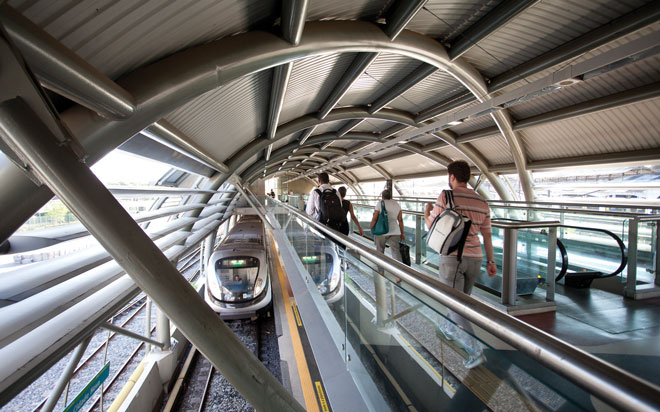 According to UN-Habitat, Latin America is the most urbanised region in the world and it is expected that 90% of the Southern Cone population will live in cities by 2020, with the rate of urban population in the continent reaching 89% by 2050. The number of cities in the region has increased six times over in 50 years, but public transport has not followed this growth and there is now a large deficit which has encouraged the use of automobiles and motorcycles.

Latin America and the Caribbean have a similar public transport structure, with publically operated railways and bus systems that are usually privately operated. This structure generated independent systems with their own characteristics, for example efficient rail systems were formed but with small networks due to the low level of government investment. However, privately operated bus networks became widespread and are now the main mode of transport within large Latin American cities, but a lack of institutional framework and oversight by governments has often led to inefficient systems with poor quality and excessive informality.

Brazil specifically broke away from this model with a clear process of modernising bus operating companies. Twenty years ago bus operators felt the importance of formalising the sector for their own survival, leaving aside the model of family businesses to be fully-managed by professional companies. Regulators sought to improve the quality of systems by creating clear regulatory rules and concession systems whilst transferring some investment responsibilities to the private sector. At the same time, expanding the rail networks required lots of investment over short periods, so the Brazilian authorities pursued models with huge private sector participation. Among some examples in Brazil is São Paulo which achieved excellent results via a PPP model that culminated with the most modern metro line in Latin America – a fully driverless system.

Currently public transport in Latin America requires more than just investment in infrastructure; it needs institutional strengthening plus vital staff training to make them technically-minded and prepared to set good project examples with the appropriate investments for the general needs of citizens.

Overall, it is estimated that 3% of the region’s GDP is invested in infrastructure, and public transport is just a small portion of this investment. Even with this relatively low outlay there are cities that have understood that without competent public transport they lose out on competitiveness.

There are more than 50 cities in the region that have invested, or are investing, in BRT (bus rapid transit) systems and bus corridors – moving close to 16 million passengers every day. Most of these advances occurred over the last 10 years – the hugely successful network in Bogotá, Colombia being one example – inspired by the successful 1980s project in the city of Curitiba in Brazil. These inspirations have resulted in the operation or extension of many Mexican BRT projects including: Puebla, Pachuca, Monterrey, Guadalajara, Chihuahua, Durango, Ciudad Juárez, México City and Leon. Currently under feasibility studies are projects in Mérida, Veracruz, Tuxtla Gutiérrez, Acapulco, Torreón and Tijuana. Also experiencing strong growth following successful Brazilian projects formed for the 2014 FIFA World Cup and the 2016 Rio Olympic Games are Quito and Guayaquil in Ecuador, Lima, Peru, plus many cities in Colombia and Guatemala.

Over the next 10 years it is estimated that more than 4,500km of BRT network will be implemented in 200 cities across all continents, with 23% of new networks being in Latin America.

Some large cities have opted for a mix of different transportation modes, while many medium and small cities have not yet invested in any innovative policies.

In this context, metro systems also have a key role to ‘feed’ or support the operation of BRT systems in large cities. Most metro systems built in the 1970s and 1980s, with some exceptions (Buenos Aires, Argentina), remain relatively small networks. However there are some big investments in new lines occurring – São Paulo in Brazil to name just one – and to a lesser extent investments in the expansion of networks in Mexico, Santiago and some other cities, plus new lines in Central America: Panama, Dominican Republic and Puerto Rico.

There are 18 cities in the region with metro systems that transported more than 5 billion passengers in 2014.

Another important point to observe in the Latin American market is the investment in public transport technology that will be required in the region over the coming years, including advanced payment systems, fare collection, ticketing innovations and passenger information.

Public transport is the basic element to fight climate change and clean technology can already be found in some cities. ‘Mega-cities’ have invested massively, but, of course, there is much to do, despite significant advances. The basic model that these mega-cities in the region have adopted is one that combines the best global practices and is based on different modal alternatives, which also favours the use of different power sources. Evidently, it needs adjusting to accommodate the investment capacity in each case. A clear example is the hydrogen bus pilot project for the BRT corridor of the São Paulo metropolitan region which carries 300,000 passengers a day.

When looking at medium or small cities, transport policies are less innovative and generally operate under the same public policy model as they did 50 years ago, drawing no benefit from the diverse range of public transport modes or energy sources available today. Public transportation in these cities operate with diesel vehicles and, in fact, 95% of cities in the region offer nothing but diesel-operated public transport, both buses and taxis.

It is therefore important to formulate a new public transport strategy to introduce new energy options because improving the modal share of electric systems that can complement the existing diesel systems, will ultimately reduce local emissions.

Eleonora Pazos is Head of the Latin America Division for the UITP. She has been working in public transport and mobility in Latin America for 20 years. She started her career at the São Paulo local authority after which she continued her career in several transport consulting companies and other public and private operator entities. Eleonora graduated in Urban Planning and she has a Master’s Degree in Environment and Natural Resources Management, plus a degree in Public Transportation and Land Use from the University of São Paulo. The main focus of Eleonora’s responsibilities is to manage the UITP’s expansion in Latin America with the aim to integrate local policies and strategies into the global market.

Eurotransport’s next international instalment will focus on developments in the Middle East and North Africa, co-written by Sherif Tharwat, Director of the UITP’s MENA Region Office and Yssoufou Cisse, UATP Regional Office Manager. Make sure you receive Issue 3 2016 published in June 2016 by becoming a subscriber today – visit www.eurotransportmagazine.com.

By Eleonora Pazos, Head of the Latin America Division, UITP