In our latest focus on a leading industry professional, Arriva’s Business Excellence Director Thomas Oster talks to Intelligent Transport about his vision for the future, and why Arriva is striving to be at the forefront of European mobility solutions. 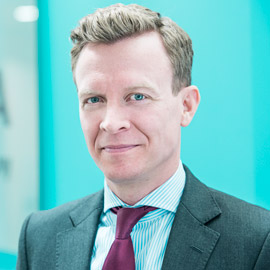 In our latest focus on a leading industry professional, Arriva’s Business Excellence Director Thomas Oster talks to Intelligent Transport about his vision for the future, and why Arriva is striving to be at the forefront of European mobility solutions.

Now into his 12th year at Arriva, the Group’s Business Excellence Director Thomas Oster has had a successful and varied career at the pan European transport business.

Born in Denmark, Oster joined Arriva in 2004 following stints in shipping and the service management sector. Now an Executive board member, Thomas originally joined Arriva as an Executive Assistant working for Arriva’s then Director for Northern Europe.

It was a period of unprecedented international growth for Arriva – characterised by successful acquisitions and organic growth in the German transport market where Thomas dedicated a vast majority of his time and effort.

In 2007 Thomas became part of the leadership team for Arriva in Scandinavia as Business Development Director – another period of expansion which saw Arriva acquiring the Danish business of Veolia in 2007 and entry into the Swedish rail market.

Moving up to the role of Commercial Director for Arriva in Scandinavia, Thomas was responsible for the successful re-tendering of the Arriva rail franchise in Denmark – which at the time was heralded for its innovative thinking with on-board WiFi and high-tech information kiosks.

The acquisition of Arriva by Deutsche Bahn in 2010 saw Arriva separating its Danish and Swedish businesses with Thomas appointed to lead a new-look team in Denmark as Managing Director. It was, as he puts it, ‘a time of significant change’, but profits grew, as did the company’s respect amongst its employees, customers and political stakeholders.

Deciding to take the opportunity to lead a new Business Excellence function in 2014, and join the Group’s Executive team, Thomas has now relocated his family to London where he is focussing on the next phase of his career with Arriva.

You have obviously had a varied but successful career in the industry, but what would you say are your biggest achievements?

Professionally, I would say that the biggest achievement I have been lucky enough to be a part of has been the way that the Arriva business in Denmark transformed itself in the years following it being separated from the combined Scandinavian business. It was a period characterised by an incredible engagement and desire to be better and which resulted in the business not only becoming significantly more profitable, but also one of the businesses within Arriva with the highest satisfaction and level of engagement among its staff.

Looking at Business Excellence – what is the objective of the function within Arriva?

Business Excellence is in many ways Arriva utilising its collective knowledge and experience to make a real impact on the future success of our business.

“As a business we need to continuously become more efficient and productive, but also more innovative”

As a business we need to continuously become more efficient and productive, but also more innovative if we are to sustain our positive trajectory. We are making progress. We are increasingly realising cross-group value optimisations within a number of areas, becoming much better at working collaboratively both within and across businesses and countries, and looking at how we should develop as a business to best suit the requirements of our customers. We are also entering into innovative partnerships with the aim of providing our customers with mobility solutions beyond buses and trains. The DriveNow partnership in Copenhagen is a good example of that.

What are the hurdles to overcome for Business Excellence?

Like any central function Business Excellence will continuously have to show that it adds value. Arriva has always been  a largely decentralised organisation and I believe that part of our formula for success has been our solid understanding of the local markets in which we operate and the strong devolved accountability that we have.

“Solid understanding of the local markets”

What more should Arriva be doing to push future mobility projects?

There is no doubt that our industry will witness massive changes in the years ahead as the borders between public and individual transport are blurring. The whole digital agenda has only just emerged in our sector and it will surely have a significant impact on not only the interaction we will have with our customers, but also the way we interact with our employees. Another trend is the variety of new mobility solutions that are available to us when we travel. Demand driven people mobility solutions like car, bike and ride-sharing are offerings that our customers increasingly expect to be seamlessly woven into their journey options, making modal shift easy and thereby increasing the attractiveness of public transport overall.

“The borders between public and individual transport are blurring”

And finally, what does the chief executive appointment of Manfred Rudhart bring to Arriva?

Manfred has settled in extremely well and has brought a first-rate track record to Arriva.  My initial impressions are that he is driven, focussed on the future and determined to lead us into our next phase of growth. It’s an exciting time to be part of Arriva in 2016 and I am delighted to be on that journey and play a role in shaping our success.