What does the agglomeration of the Swiss city of Lucerne with around 200,000 inhabitants need the most – a bus or a tram system? Lucerne’s politicians and traffic experts have discussed this question over recent years following a steady increase in frequencies on its public transport network. As Norbert Schmassmann – Head of Lucerne’s public transport company VBL – explains, the decision ultimately fell to a high quality bus system for the city… 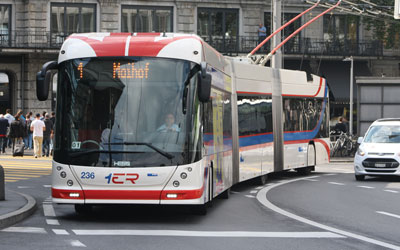 Following a referendum, Lucerne’s last tram line stopped operating in 1961. One of the reasons for the closure of the tramways was that the people wanted to offer more road space to car traffic. In recent years, car traffic has increased to such an extent that city rush-hour jams occur too often, thus affecting the operation of public transport buses because there are only a few road sections that are just for use by public transport vehicles.

Located between lakes and mountains, the city of Lucerne is topographically narrow and the city is densely built-up. There is no space to build additional or wider roads; traffic planners are therefore faced with the challenge of how the ever-growing demand for capacity on public transport can be met with the current road conditions. In 2014, 9% more passengers than the year before travelled on Lucerne’s public transport system, and over the past five years the increase has been more than 20% in total.

Bus Line 1 runs at approximately 5 minute intervals. In 2006, the Verkehrsbetriebe Luzern AG (VBL) used, for the first time in its history, three double-articulated trolleybuses (or ‘light-trams’ by HESS AG). These 25m-long buses run alongside trailer buses on Line 1.

Lucerne’s public transport system is planned and financed by the Verkehrsverbund Luzern which has decided to establish a new system known as ‘RBus’2; the letter R stands for ‘rapid’. The RBus system is an elevated standard for double-articulated trolleybus lines, which offers passengers almost all of the advantages of a tram system. Through the expansion of the offer, the rolling stock and infrastructure, the RBus system should produce an optimal transportation system for the agglomeration of Lucerne by 2025. This aim will be achieved through a progressive and coordinated approach.

The goal is to get as close to the quality of a rail transport system as possible, but at the same time take advantage of the lower-cost implications of a bus network. The Verkehrsverbund Luzern developed this system based on the concept of a Bus Rapid Transit (BRT) system, which is already being used successfully in several cities in France and South America. The RBus system is based on the cantonal structure plan in 2009, the current building programme for roads in the canton of Lucerne, the report of public transportation in Lucerne 2014-2017 and the public transport supply concept ‘AggloMobil due’, which is authorised by the Swiss government.

With the RBus system, the travelling time from one terminal to the other is to decrease by 10% on average. The travel time for passengers in the rush hour should be similar to that of those travelling during off-peak times and largely constant (increasing reliability). Double-articulated trolleybus lines reach the standard of a tram system in terms of comfort, image and preference.

VBL is the largest transport company in the canton of Lucerne and operates most bus routes in the city of Lucerne and its suburbs. Around 460 employees carry approximately 46 million passengers per year (combined total). In 2014, another nine double-articulated trolleybuses (manufactured by Swiss company, Carrosserie Hess AG) were delivered to Lucerne. Three vehicles of the same type were previously purchased in 2006. The new vehicles have a tram-like design with a capacity for 220 passengers, providing approximately 30% more capacity than the trailer buses which previously operated along the same route. By the end of 2017, VBL will purchase another 17 double-articulated trolleybuses for use on Bus Line 2 (Emmenbrücke–Lucerne, planned as of December 2016) and Bus Line 8 (Hirtenhof–Würzenbach, planned as of December 2017), converted to the ‘RBus’system.

Further to the double-articulated trolleybuses, by 2025, numerous infrastructure measures shall have been implemented on a gradual basis. Today, the popularity of Line 1 means that buses operate alongside private car transport, which mean delays can often occur during peak hours – some sections only reach speeds of 7km/h in rush hour; many people would make their journeys faster on foot!

Enhancing the capacity of Line 1 makes sense for several reasons. Firstly, there are a lot of people already using the corridor Kriens–Luzern and further into the Rontal, on the other hand the strongest growth in demand in favour of public transport is identified in the agglomeration. From 2005 to 2010, the modal split in favour of public transport increased from 15% to 24%, which represents an increase of 60%. Furthermore, the starting point of Line 1 for such an adjustment is low. The preference for public transport in the city of Kriens has already been reflected in the scheduled road-building programme, and in accordance with the 2nd generation agglomeration programme Line 1 is to be extended to the city of Ebikon in the coming years. Around a dozen infrastructure measures are planned to be implemented gradually, including traffic management systems, road stops and additional bus lanes. The new bus lane at Pilatusstrasse in the town centre of Lucerne, near the main station, is already realising a significant improvement in journey times for passengers. This bus lane brings an effective acceleration towards the train station. Although this new bus lane only approximately 150m-long, the buses are now up to 2 minutes faster travelling to the main station bus stop. Not only are the double-articulated buses of the RBus system benefiting from this short bus lane, but so are all public buses reaching the main station. Every day more than 52,000 passengers travel on this new bus lane.

As a third element, in addition to the rolling stock and infrastructure measures, the RBus system will expand connections. We aim to improve the linking of tram and bus services with more connection options. Line 1 is to be extended from Lucerne Maihof to the city of Ebikon and the railway station of this city, so that passengers can transfer there from bus to train. We also plan for bus routes within the city of Lucerne to be linked in order to enable an optimal schedule for the double-articulated trolleybuses. If Line 1 is extended to Ebikon, planners expect over 12 million passengers annually.

The use of the new double-articulated trolleybuses sees the replacement of the roughly 25-year-NAW-Siemens trolleybuses. VBL has already sold 10 of these buses to Chile in the city of Valparaiso for a symbolic amount.

Norbert Schmassmann has been Chief Executive Officer of VBL since 1996. He studied Economy at the University of Basel and graduated as a Doctor of Economy in 1983. Norbert worked at the financial management unit of canton Basel-Landschaft as Chief Financial Officer and Chief Human Resources Officer at Basler Verkehrs-Betriebe (BVB). Norbert has been a Member of the Board of the Swiss Association of Public Transports since 2006 and has been its Vice-President since 2014. He is also President of the Council of Transport Companies in the Lucerne area. In 2015 Norbert became a Member of the Supervisory Board of the transport company Regionalverkehr Baden-Wettingen. He is also a Member of Parliament for the canton of Lucerne.