Stadtbus Winterthur: a strategy to keep up with growing demand

Steeped in history, the city of Winterthur in the canton of Zürich in northern Switzerland has seen many changes to its public transport offering over the years. But now, with areas of the city being expanded and redeveloped, plus the increase of passenger numbers, the growing demand for the city’s bus network means a new strategy must be put in place. Stadtbus Winterthur’s Thomas Nideröst, Director, and Reto Abderhalden, Director of Communications and Marketing, explain what is next for its operations and the challenges to be met by 2030… 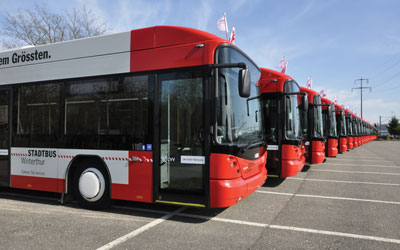 The roots of Stadtbus Winterthur can be traced back to the ‘Rössli’ tram which started operations in 1895 – but it only ran for two years. The first tram route was opened in the middle of 1898. The heyday of the tram lasted until 1930, in which year, in a referendum, the Winterthur populace gave their approval to launch the first bus route in preference to the tram which started operations in 1931, and already by 1938 the first of the tram routes was replaced by a trolleybus route. Gradually the tram routes were closed down and the bus network was extended, and by 1957 the demise of the tram in Winterthur was apparent. By 1995 the five trolleybus routes 1, 2, 3, 4 and 6 were up and running. The construction of the Storchenbrücke bridge – a new landmark in Winterthur – first led to a temporary use of diesel buses on the ring route 4, and then later to the definitive decision to end the use of trolleybuses, for operational and logistical reasons. In 2005 the town council formally approved the transition from trolleybus to diesel bus operations on the said route, but it was another five years before the remaining vehicle power-lines were finally removed. In 2006 the trolleybus routes 3 and 6 were merged to form the diagonal route 3. Today the Winterthur network still has three trolleybus routes.

1990: the launch of the Zürich Transport Network (ZVV)

Following their consent to the popular vote in 1981 on the use of the S-Bahn railway, the voters created the legal basis for the launch of the Zürich Transport Network (ZVV) in 1988. On 27 May 1990 the S-Bahn railway and thus also the ZVV commenced operations.

Some 60% of the annual expenditure in the ZVV is covered by ticket sales and secondary revenues. The remaining costs are paid one half by the Canton of Zürich and one half by the 169 municipalities in the canton.

The company operates 12 city routes. Trolleybuses operate on the busiest routes 1, 2 and 3. Added to these there are five regional routes and also several night bus routes which ensure almost 24-hour coverage by public transport in the nights of Friday/Saturday and Saturday/Sunday, and connect the town centre to the suburbs and the municipalities of the conurbation.

In total the buses of Stadtbus Winterthur cover about 5 million kilometres each year, carrying some 27 million passengers. The public transport in the town of Winterthur has seen an increase of about 30% in passenger numbers over the past 10 years, with an increase in kilometres travelled of nearly 14%.

Today this service is provided by a total of 250 staff members and a fleet of 88 vehicles (34 articulated trolleybuses, 30 12m diesel buses, and 24 articulated diesel buses). On average each of our buses travels about 60,000km each year, and some of them cover about a million kilometres in the course of their working life

All the trolleybuses of Stadtbus Winterthur are fitted with a diesel-powered emergency generator which means that they can continue to drive under their own power using the diesel generator during power cuts, or across construction sites, for quite long distances.

The diesel buses are fitted with CRT filters (Euro IV), at the least. Many of the new vehicles are, however, already fitted to a higher standard (Euro V with exhaust gas treatment), and the latest generation of diesel-powered vehicles, which have just been ordered, will be fitted with Euro VI engines.

Since 2015, Stadtbus has benefitted from the use of a modern workshop infrastructure, its own body shop, two washing plants, and a brake test bench. The transport services staff and the management, together with the control room managers, form the operational division, and with their 180 employees they form the largest part of the enterprise. This is followed by the technical department (maintenance, repairs and cleaning, as well as upkeep of the overhead lines), and the administration consisting of the management, service planning, finance and services, and marketing and communication.

Stadtbus Winterthur within the urban environment

Stadtbus Winterthur is a transport company of the Zürich Transport Network (ZVV), responsible for its market. Within the timetable allocation procedure, and taking into account the budget from public funds to cover the annual operating costs, it plans the range of public transport services offered in the network region.

The large town quarters Töss, Seen, Oberwinterthur, Wülflingen and Hegi are very well connected to public transport and the services have been extended to match the new mobility requirements – with one exception, all the routes go via the main railway station square. This is in effect the main hub of public transport in Winterthur, and provides good streamlined connections to the efficient S-Bahn railway network, to the national Intercity East-West axis (St.Gallen–Zürich–Geneva), and to the international network. Zürich International Airport is just 15 minutes away by non-stop train. As the on-board bus advert says: ‘Main station, next-stop-but-one London’.

Where is the journey going next? Challenges to be met by 2030

The growing numbers of passengers mean that several routes are operating at capacity limits, especially during the morning rush-hours (6:00 to 8:00). The result is overcrowded vehicles, and reduced levels of comfort. Added to this is the decline in punctuality due to the increasing traffic on Winterthur’s roads, and the appeal of public transport is at risk.

What is more, new town quarters are being set up at the edge of town: more homes and workplaces are being created and all the additional mobility requirements have to be recognised and satisfied in good time.

Stadtbus Winterthur has developed an overall strategy. Based on this, and in close cooperation with the competent specialist town offices and Winterthur political authorities, a strategy for the range of services has been decided on. As a result of the development of built-up areas, a new centre will emerge to the east of the present town centre, and the changing mobility habits – in the next 20 years an increase of the total traffic of about 20% is expected – with the demand for public transport rising by 65-90%.

The strategy for the range of services indicates the direction that should be taken until 2030, and which measures should be included in the planning for the long-term so that their implementation can be as cost-effective as possible, by ensuring that they can be appropriately applied to the road construction and road maintenance projects.

The core elements of the strategy for the range of services are:

Stadtbus Winterthur is an economic success factor for the town and conurbation of Winterthur. The attractive services, which are continually being adapted to the new requirements (new routes being set up, higher frequency of services, and more spacious vehicles), have contributed to the lasting, sustainable growth of the town. This has transformed the former workers’ town into a service centre and city of education, with a growth in population of about 18% over the past 25 years. Thanks to the bus network, which connects both the residential areas at the edge of town with the inner city, and also connects up with the main railway station as the hub of the regional public transport network, thereby ensuring an efficient level of mobility, it has been possible to convert large derelict areas of industrial land into new uses, transforming them into appealing working and living quarters.

Thomas Nideröst has been Director of Stadtbus Winterthur since 2007. With a degree in Business Administration (HWV), he was first employed in the insurance sector, followed by seven years with the Zürich Transport Network (ZVV) in procurement, and then another seven years at the Transport Office of the Canton of Zürich, but most recently as Deputy and Interim-Director. At the national level, Thomas Nideröst has been a Member of the Conurbation Transport Committee since 2007, and since 2012 he has been on the Board of the Public Transport Association, as well as Chairman of the Committee for Bus Technology and Operations (KTBB).

Reto Abderhalden has been working for Stadtbus Winterthur since 1999. Since 2007 he has been Director of Communications and Marketing and a Member of the Executive Management. This department also includes the customer support centre ZVV-Contact at the main railway station. Following his matriculation and after completing his degree in German Language and Literature, Reto served in various positions during the next 10 years, including Quality Manager at PostAuto Schweiz AG. Besides managing the department, his present duties include public relations, provision of information within the company, and supervising the quality assurance and environmental management, as well as implementing CD and CI.