All over the world new alternative fuels are emerging to replace fossil fuels, such as gasoline and diesel. The overall benefits are great but with new fuels and technical solutions, new risks emerge. For Intelligent Transport, colleagues Anders Lönnermark from SP Technical Research Institute of Sweden, plus Johan Lindström, Peder Lindström and Petter Backlund from Fire and Rescue Greater Gothenburg, explain that first responders to incidents can often face new situations that they are not familiar with and have to make decisions that they are not trained for. Does the lack of education and experience have consequences on society, which can all come down to what kind of decision at incidents is taken? 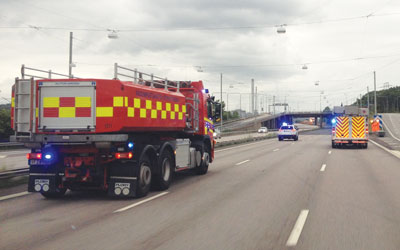 On today’s biogas-powered buses, the gas tanks are equipped with temperature fuses to ensure that the vessels do not explode due to the increased pressure resulting from heating of the vessels. The temperature fuses activate when the temperature passes approximately 110°C. This means that all of the gas is released at a high pressure out to the surroundings. In most of the known cases where CNG (Compressed Natural Gas) buses have caught fire, the temperature fuses have worked correctly and the gas has been ignited when leaving the vessel, causing a massive jet flame. Although this jet flame is a natural feature of the safety system, it can still pose a danger to the firefighters and means a greater risk for the fire to spread or for heat exposure to structures.

The difficulty for the approaching fire and rescue services is to know whether the temperature fuses have reacted and if the safety nozzles have released the gas or not, creating a problem for selecting safe and efficient tactics. Furthermore, Lionel Perrette and Helmut K. Wiedemann describe in their article1 three different fire incidents where the fire has led to explosions of vessels. The reason for these explosions was not the failure of the temperature fuse; the vessels exploded when they were heated on a single spot that did not affect the temperature fuse. One question that has to be raised is if the only problem with biogas-powered buses is fire in the vehicle with risk of explosions, or does it involve massive jet flames? For example, what happens if the bus is involved in a traffic incident where the gas system in some way has been damaged and a leakage has occurred?

For the last years in Sweden, several traffic incidents have happened where the gas system on the bus has been damaged and the rescue leader has been afraid that leakage has occurred. Then a decision needs to be taken, but it is not always obvious what would be the correct decision to take.

In June 2013, a traffic incident occurred in the central parts of Gothenburg, Sweden. Involved in the incident was one personal vehicle and one CNG bus. As shown in Image 1 on page 00, the personal vehicle had only made contact with the front of the bus. The damage on the bus could only be seen as small buckles and discoloration under the front window. The difference between this incident and an ‘ordinary’ traffic incident was that the CNG fuelling nozzle and manometer of the bus was located at the front, leading to the manometer being damaged in the collision, causing a small leakage of natural gas. The risk with leaking natural gas is that the gas is easy to ignite and has a flammable range from 4-16 vol %, causing a large explosive area if leakage occurs.

The rescue leader, from Greater Gothenburg Fire & Rescue Services, gave initial orders to close all the nozzles on each gas cylinder to stop the flow of gas. After one hour the gas flow had not stopped and the rescue leader began to think about the following three choices:

Due to high risks with all these choices, the decision was to disconnect as many electrical devices on the bus as possible and drive the bus with the on-going leakage to its front out of the city to a safe place and then empty all cylinders. This decision had effects on the society by having a closure of 150m in the city for a few hours, and the traffic was stopped for a short time when the bus was driven out of the city. The incident commander was thinking in terms of following events, due to the nature of each alternative decision. Other decisions could have had huge consequences on both the infrastructure and the general public. Due to the complexity in the society and in technical systems (in this case biogas-powered bus), it is more and more important to think in terms of escalating consequences when the incident commander selects what kind of decision they will make. These kinds of escalating consequences can be called ‘cascading effects’, i.e. one incident starts and a chain of subsequent events. Depending on what kind of decision the incident commander makes, the chain of subsequent events can take different turns. One simple example of explaining this is a fire at a car repair company. Gas cylinders are stored in the building for welding equipment. The rescue leader takes the decision to evacuate the area and keep it closed for 24 hours, according to recommendations where gas cylinders are involved in a fire. Next to the car repair company is the highway and railway, which were also closed for 24 hours which had huge consequences on society.

Another interesting incident was when a tall biogas bus entered a small tunnel in Stockholm, Sweden, in 2013. The bus hit the ceiling and gas leaked from one of the gas cylinders that fell from the bus. This did not lead to any fires, explosions or injuries. However, just the risks meant that several different options and decisions had to be considered. The tunnel was closed for 11 hours, which of course had a negative effect on traffic and logistics in Stockholm. Different courses of events in this situation could have led to other cascading effects.

Modern socio-technical systems are increasingly characterised by high degrees of interdependencies. Whereas these interdependencies generally make systems more efficient under normal operations, they contribute to cascading effects in times of crises. Therefore, challenges for emergency preparedness and response are growing significantly – challenges which are more and more relevant to both natural and manmade emergencies and are reinforced by the risks for cascading effects in complex emergency management environments.

In particular, complex environments which lack adequate resilience to certain initiators will be prone to cascading effects. An escalating incident in such an environment can lead to severe cascading effects and quickly become extremely difficult for emergency services to handle. The incident can ultimately have enormous consequences with respect to life, property and the environment and for both infrastructure and the general public. These consequences can, in many situations, have both direct and indirect effects – not only in the immediate surrounding geographical area, but also across very large areas, potentially extending across borders.

SP Fire Research is coordinating the EU-project CascEff2 and performs the work together with 11 other partners from Europe. In CascEff, four of the main objectives are:

CascEff will improve our understanding of cascading effects in crisis situations through the identification of initiators, dependencies and key decision points. A methodology has been developed to investigate cascading effects during different occurred incidents. The knowledge from the analysed incidents together with studies of how different tools are used during an incident, are used to develop a CascEff Incident Evolution Tool (IET) which will enable improved decision support, contributing to the reduction of collateral damages and other unfortunate consequences associated with large crises. Use of the Incident Evolution Tool will be validated through its implementation into different incident management and training platforms representing different end-users in the project. A number of different scenarios, involving different cascading effects and different timelines are developed for this validation. The project has now come halfway and some results are already available at the project website2, where it is also possible to sign-up for further information.

Dr. Anders Lönnermark is a Senior Research Scientist in the Department of Fire Technology at SP Technical Research Institute of Sweden, where he has been employed since 1995. Anders has a long experience of performing fire tests, both in model-scale and in full-scale. In 2005 he got his PhD degree from Lund University and the title of the thesis was ‘On the Characteristics of Fires in Tunnels’. Anders is co-author of the text book Tunnel Fire Dynamics. Since 2013 he has been Adjunct Professor at Mälardalen University and he is currently the Coordinator of the EU project CascEff.

Peder Lindström started his career at Greater Gothenburg Fire and Rescue Services (Räddningstjänsten Storgöteborg) as a fire-fighter and advanced during his 35 years in duty to an incident commander. Peder now works as a part-time Project Leader at SP Fire Research in the EU project CascEff to analyse effects of decision-making.