Giuseppe Noia, Chief Communications and Public Affairs Officer of Rome’s public transport company Atac S.p.A, outlines what is currently being done to improve public transport services in the city – improvements that are necessary to secure the overall future operation of the company… 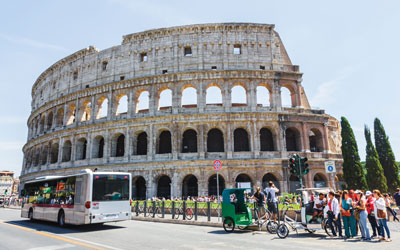 Atac is the public transport company of Rome – the Italian Capital. It works with a public road system which is very different from that of most other European capitals; its peculiar characteristic is the predominance of the surface network, served especially with buses, in comparison to the connections provided through underground lines.

The reasons for this structural layout are to be found in the historical characteristics of the city (subsoil rich in archaeological remains) and in past choices concerning public transport investment policies.

In recent years, the company has been making efforts towards establishing a more effective management process of economic resources, which are transferred from the Central Government to the Lazio Region and the Municipality of Rome to be assigned to local public transport operated by Atac.

The rationalisation of economic resources allocated to local public transport is pushing the company to pay special attention to production processes which are able to generate larger savings and produce less waste.

Within the next five years, in line with its Business Plan 2015–2019, Atac will have to face several key challenges for the future concerning economic recovery and service improvement, in terms of both quantity and quality.

In terms of improving its service, the company is carrying out an investment plan to upgrade surface transit and metro trains.

After the introduction of 337 new buses between 2013 and 2014, starting from January 2016 and for the following four years, the company envisages the purchase of a further 700 new 12m and 18m Euro 5 diesel-powered buses.

These vehicles will be equipped with the most modern systems in terms of safety, technology, driving comfort and accessibility including video surveillance systems, a protected driver’s cabin with reserved access door, on-board multimedia communication systems, a satellite vehicle tracking system, manually operated wheelchair lifts, full air conditioning, plus a Next Stop Announcement system.

With reference to the metro service, during these months, 18 new latest generation CAF trains will be introduced to modernise the rolling stock of Metro Line B.

But the most important innovation concerns infrastructure, with the opening to the public of Metro Line C, the third metropolitan line of the Capital. The first section, inaugurated in late-2014, links the eastern outskirts to the city. In June 2015, a second section was opened which connects the eastern area of Rome with the City Centre.

Metro Line C, also known as the green line, is an outstanding example of technological innovation in rail transport. The line is equipped with a fully automated driverless system. Trains are controlled remotely by the central traffic control centre which is able to manage traffic on the entire line.

Future investment projects on Line C, pertaining to the Metropolitan Council and the National Government, whose final validation is still pending, envisage additional extensions of the line up to the Historic Centre of Rome and the intersection with Line B at Colosseo station and, at a later stage, also with Line A.

Atac and its commitment to sustainable development

The purchase, between 2013 and 2014, of the 337 new generation Euro 5 buses, reduced the operator’s fuel consumption by approximately 12%. The reduction in fuel consumption allowed a decrease of pollutants by 67% of carbon monoxide, by 80% of hydrocarbons and by 75% of nitrogen oxides

There has also been a retrofit of 174 Euro 3 buses to Euro 5, thanks to the installation on the vehicles of filter systems to reduce harmful emissions.

In recent years, Atac cooperated with ENEA (the National Agency for Energy and Sustainable Economic Development) in projects aimed at reducing energy consumption in the company and at the implementation of energy supply systems based on renewable sources, such as solar panels and wind power.

Atac carries out recovery and reuse of unused materials, which in 2014 led to a 46% reduction of waste, in comparison to the previous year.

Technology at the service of sales systems

Furthermore, Atac is working to promote the use of new ticket sale technologies. At the beginning of 2015, the company completed the replacement of paper monthly passes with reloadable electronic chip cards.

Thanks to an agreement with different partners working in e-commerce, Atac launched the

‘atac.sosta’ payment service, that allows payment of park & ride facilities and the so-called ‘blue stripe’ on-street parking, managed by Atac, through an app for smartphones, tablets and computers, or even with a simple phone call.

The success of the ‘atac.sosta’ initiative is represented by the progressive increase of customers who choose the service as an alternative to old parking payment methods (with coins or prepaid cards), since it allows to pay just the actual minutes of use; a success that is pushing a growing number of technology partners – thus far six – to develop new software solutions for the payment of parking services.

But the latest technological innovation is the BIPiù service which allows purchase and validation of tickets on buses, trams and metros, as well as the monthly subscription to Atac’s Local Public Transport service.

Available for free download on mobile devices, customers have the option to purchase tickets with their smartphones just before getting on a bus or metro, without additional costs and with maximum ease. The introduction of BIPiù aims at reducing the so-called involuntary fare evasion, in other words, the choice not to purchase public transport tickets due to the impossibility to find ticket offices nearby.

In cooperation with its security unit, Atac is making an effort to guarantee the best safety standards for its passengers.

Launched in March 2014 and still running, the company’s ‘High Impact’ operation involves collaboration between Atac’s security forces and law enforcement officers in the fight against petty crime on the metro network.

Within the ‘High Impact’ operation, specifically assigned staff composed of Atac’s safety inspectors and security guards patrol the territory with local and itinerant squads and, under the coordination of the operations centre, provide logistical support to the local police forces.

Data relating to the 2014 final report of the ‘High Impact’ operation show that during the past year, from March to December, Atac’s staff has contributed to the identification of more than 2,000 people; to the expulsion of about 950 persons, including 230 well-known pickpockets; to 140 seizures of counterfeit goods; while sanctioning more than 100 illegal vendors, and pressing about 50 charges for various crimes.

During the first four months of 2015, the activities of ‘High Impact’ continued, resulting in 1,200 identifications, over 500 expulsions, of which more than 130 pickpockets, and 70 seizures of goods.

Operation ‘High Impact’ has further been enhanced, since last March by the introduction of dog support units in metro stations with the highest rates of passenger traffic, such as ‘Colosseo’, ‘Termini’ (central train station) and ‘Spagna’.

The active security operations are supported by a complex technological system for security level analysis.

More than two thousand cameras and hundreds of anti-intrusion sensors pick up everything that happens in the metro, recording and transmitting potential alerts to the Atac Operations Room in real-time.

The information flow coming from Atac’s security systems is transmitted to a single hardware and software platform, able to communicate and interoperate in real-time with the control rooms of other law enforcement agencies.

Since 2011, the company has an active Twitter profile1 that soon became a touchstone for real-time mobility information in the city.

Currently, the Twitter profile has over 85,000 followers and has posted over 80,000 information Tweets.

The profile provides guidance and gives information about the lines operated by Atac. In case of parades, demonstrations and during extraordinary events, Atac’s Twitter profile offers true real-time coverage of every change in the public transport network. To ensure completeness of information, the Twitter profile also spreads information on important events occurring to networks of other operators.

Special appreciation was expressed to the Twitter profile which has been recognised as a public utility account by Twitter International – owner of the world’s most used microblogging service. The web analytics company Blogmeter has awarded, several times, the Twitter profile account as one of the fastest in providing answers to the information-request-Tweets of its followers.

The Twitter profile represents the most advanced service of the company’s new strategy designed to give customers instantaneous and reliable transport information.

Another service, still in its testing phase, is the activation of a phone number able to deliver information about public mobility in the city through the mobile messaging platform WhatsApp.

The future of Atac

The future of the capital’s public transport operator involves, on the one hand, the conclusion of its restructuring process and, on the other hand, the maintenance and, if possible, a boost to investments in transport, technologies and infrastructure.

For sure, the investment policies and the overall future of the company will very much depend on decisions that local institutions and the national government will take about the regulatory framework of public transport.

Giuseppe Noia has been an expert in charge of Communications and Marketing departments in public utility companies since 1996. After gaining important experience in ACEA SpA, Giuseppe has worked for ATAC SpA since 2005 where he has held various managerial positions – currently as Chief Communications and Public Affairs Officer. Over the years Giuseppe has held numerous positions in national and international organisations and Boards of Directors of companies operating in the public utility sector.