Now that Rotala PLC has taken over the running of Preston Bus and Diamond Bus North West in the UK, Regional Operations Manager John Asquith highlights how the organisation has grown, the challenges it has overcome, the work that it still needs to concentrate on in the years ahead, and ultimately the determination it has to succeed as efficient and effective public transport operators for the long-run… 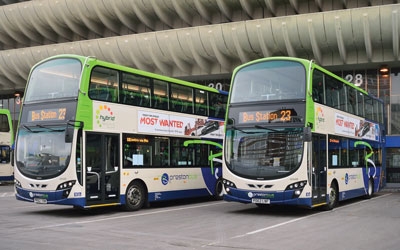 Preston Bus (PBL) has a long history, with transport activities dating back before the turn of the 20th Century. Electric trams began operating from the present Deepdale Road headquarters in Preston from 1904. The first bus services began in the early-1920s. Since then the company has progressed from a substantial period of local authority ownership, to employee ownership following bus deregulation in 1986, to ownership by other bus operators. In January 2009, following two years of intense competition, PBL was sold to Stagecoach. The takeover proved a catalyst for essential changes within the company. Though some work had been done during the period preceding takeover, there was an urgent need for modernisation – especially in the day-to-day running of the company. Consequently management was restructured, processes and working practices were updated, and the depot workforce was streamlined.

However, the Stagecoach takeover was extremely controversial. A subsequent investigation into the sale by the Office of Fair Trading forced Stagecoach to run PBL as a separate entity with neutral management. The culmination of the investigation was a Competition Commission ruling that the deal had adversely affected competition in the area, and Stagecoach was forced to sell PBL after two years. There was interest from a number of companies, including a possible worker buy-out, but ultimately the Rotala Group was announced as preferred bidder, and the sale was completed in January 2011 with Bob Dunn becoming Managing Director of Preston Bus.

Electronic ticket machines, back-office systems and IT have also been updated. EcoManager and Actia fuel efficiency and telematics systems were installed. Training, mentoring and staff development were prioritised; including successful apprenticeship schemes and NVQ qualification courses for drivers and engineers.

Parent Company Rotala PLC is AIM listed, with expanding interests in bus, coach and transport management services in the West Midlands, South West and South East of England. The North West was new territory, with Preston a hub for growth. During 2014, Preston Bus set-up an outstation in Blackpool and successfully gained several school contracts in the Fylde and Wyre coast area, enhanced by the award of a contract on behalf of Blackpool & Fylde College. The structure of Preston Bus, and the experience contained within the company, opened up the opportunity of growth in the Manchester area.

There had been tentative enquiries in the past, but any deal needs a willing seller, willing buyer and appropriate price. Meanwhile, PBL applied for and was accepted on the Transport for Greater Manchester (TfGM) supplier list – although the contracts that became available were thinly spread, and did not allow an adequately sized operating base to become established.

An opportunity arose to acquire Green Triangle Buses – operating as South Lancs Travel (SLT) – owned by Julian Peddle and David Reeves, both familiar to the directors of Rotala as a result of their long-established involvement in the bus industry.

On the 1 March 2015, the sale of SLT – based in Atherton, Greater Manchester – was completed, giving Rotala access to the Manchester market.

Prior to acquisition it was determined that the trading name should be rebranded. SLT became Diamond Bus North West (DBNW), complementing Rotala’s Diamond Bus brand in the West Midlands, and at the same time recognising that PBL already had a strong brand in its own area.

Rotala’s aim is that DBNW continues to be managed by a local team. Day-to-day responsibility for safety, compliance and reliability resides at Atherton, with supervision and support from the established management team at Preston Bus. Bob Dunn, Managing Director of PBL and now also DBNW, coordinates his time in between Preston, Atherton and the Midlands.

On takeover, there were a number of priorities – not least those centred around engineering performance and compliance. Initially it was important that core policies and procedures were quickly and uniformly implemented. A number of systems were introduced immediately, and all employees were issued with driver and employment manuals, which are updated annually. These set the standards everyone works to, and ensure that safety and legal compliance is not compromised.

It was quickly acknowledged that reliability and the fleet profile were major issues and approximately 30% of the fleet was upgraded within the first four months. Additionally, PBL loaned vehicles to DBNW to ease pressure on the fleet. It was also advised prior to takeover that there was an engineering skills shortage in the Atherton area, and despite various initiatives recruitment in the engineering department proved difficult. That said, progress is being made and DBNW has recently secured the services of several experienced fitters, a vehicle inspector, and a workshop manager. To help safeguard against a future shortage of expertise, Manchester College is to undertake a skill assessment of all engineering staff based at the Atherton depot to determine training requirements.

To achieve brand consistency the fleet is being repainted in DBNW livery – dark blue with DBNW logo. Dark blue reflects the Rotala Diamond corporate colours in the Midlands, and the DBNW identity is differentiated by the green Diamond incorporated in the new logo. The repainting process is ongoing and is likely to take the remainder of the year to complete. As part of the new DBNW brand image, the high profile service 635 has been route branded. The 635 operates from Wigan to Wrightington Hospital via Shevington and Appley Bridge.

Additionally, new corporate Rotala uniforms were introduced in June with the company dress-code phased in. This has made a real difference in the public face of DBNW. To meet a short-term commitment uniform was sourced in the UK.

The challenges of Greater Manchester

As with any takeover, there was an element of apprehension about the future amongst staff at Atherton. However, such times also offer opportunity and hope, and there are always individuals that shine and progress through their willingness to embrace change, develop and ensure that standards and quality improve.

The terms and conditions at DBNW are competitive and will continue to be so because of the nature of the contracts it operates. It remains an aspiration of the company, however, to improve revenue streams and afford a pay rise early in the New Year. Since the takeover in March new contracts were acquired in April and July requiring a 20% increase in driver numbers. Fulfilling this demand quickly has proved challenging, but it has allowed for new employees to be put through a thorough recruitment and induction process. Since Rotala ownership, the PBL programme of driver training and mentoring has shown positive results, a culture change focusing on customer service and bringing new blood into the industry. As a consequence, and to guarantee long-term driver requirements, DBNW recently began advertising for trainee bus driver candidates. Successful applicants will be trained through Lancaster Training Services.

Basic improvements to the DBNW depot provided a better working environment for everyone. The upgraded facilities included additional and improved lighting, transfer of supervisory staff from into the main building, moving and upgrading driver rest room facilities, re-surfacing a large area of the depot yard, and introduction of clearly marked safe walkways.

Regrettably the inherited fleet at DBNW presented operational complications, and it became a challenge to meet the strict contractual compliance regulations of Transport for Greater Manchester (TfGM). The initial performance of DBNW was unsatisfactory, and in the short-term this compromised punctuality and reliability and meant TfGM and customer expectations were not met. In essence, DBNW did not immediately satisfy its own aspirations of quality service. However, since June there has been a huge turnaround in performance, and lost mileage on the tendered network currently stands around 0.2% – which given the operating area of DBNW meets expectations. It was also considered essential to provide a supervisory presence and spare vehicle at local interchanges on the outskirts of the operational area to ensure better communication and cooperation and ultimately an improved customer experience.

The DBNW Operational structure has been reviewed and additional management and supervisory skills have been brought in to complement local knowledge. This means the organisation will deliver a consistent approach and values across the business, with PBL and DBNW developing a common platform for growth in the North West.

Rotala and Diamond Bus North West are in the Greater Manchester market for the long-term, and have met the challenges presented since March. There is still a great deal to do, but as an organisation there is a determination to succeed as quality operators for the long-term, by ensuring a focus on a positive, can-do attitude and culture.