Public transport in Norway must win the battle over cars

‘The number of cars on the roads shall not increase, even though the population is growing’. This is the ambitious political goal adopted by national and regional authorities in Norway. However, getting more people to use public transport is challenging in a country where people live spread out in urban areas, and where the private car is still given priority in urban planning. Welcome to Hordaland County on the west coast of Norway, where public transport has seen significant growth in recent years as a result of, among other things, the investment in Bergen Light Rail. Oddmund Sylta, Managing Director of Skyss, explains more. 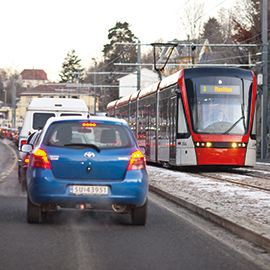 Keeping up with demand

In Bergen, Norway’s second biggest city, forecasts show that the city’s population will increase by more than 20% in the next 15 years. If the whole growth in passenger transport is to be covered by means of transport other than private cars, the public transport agency Skyss has calculated that the number of daily public transport journeys has to increase by 200% by 2040. This will require a five-fold increase in public funding in 2040 compared with 2012.

Bergen has a population of around 270,000. In terms of area, the city is as big as the capital Oslo, but the latter has more than twice as many inhabitants. In Bergen, urban planning has been based on passenger car transport for many decades. Between 1998 and 2007, the number of passenger cars in Bergen increased by 43%. The construction of homes in Bergen has not kept up with the population growth and the increase in house prices since the 1990s has forced more and more people to move out to the municipalities around Bergen. This has resulted in a rise of commuters and ever-increasing car traffic.

The publicly-owned public transport agency Skyss was established in 2007, after the politicians in Hordaland voted to put the county’s public transport out to tender. Since its formation, Skyss has worked on major restructuring of the public transport system, which at the time had not undergone any significant improvements for many decades. From 1993 to 2003, there was a negative trend in public transport in Bergen, and, with only a few exceptions, passenger numbers were declining from year-to-year.

This trend was reversed after the formation of Skyss, and the company has succeeded in creating incredible growth in passenger numbers. In the last four years alone, the number of boarding passengers in Bergen has increased by 44%.

One of the most important measures behind this growth is that Skyss has reorganised the structure of bus services and has introduced a network of main services in Bergen. It is not without reason that Bergen is known as the city between the seven mountains, and the road network is limited by the city’s topography to a small number of main roads that lead into the city centre via tunnels or bridges. Skyss has established six main services along the main corridors, with frequent departures, a regular frequency and high capacity. The main services now account for almost half of the total passenger figures for the whole county.

The most important main service is Bergen Light Rail, a project that was controversial for several decades until it was finally realised thanks to broad, cross-party cooperation. Today, Bergen Light Rail is 13.5km-long and extends along the main corridor from the city centre to the city districts in the south. Every day, it carries approximately 35,000 passengers. In the areas covered by Bergen Light Rail, the proportion of travel by public transport has increased from 19-29%, while a reduction in car traffic has been seen for the first time ever. Bergen Light Rail is considered to be the main reason for this pleasing development, which is confirmed by the fact that the rest of the city has not even achieved the goal of zero growth in car traffic.

Bergen Light Rail is now being extended south towards Bergen Airport, Flesland and this stretch is scheduled for completion in 2016. It will then be developed further to other city districts. Bergen Light Rail is jointly financed through public funding and road tolls. The urban development effect along its route has been incredible, with new homes, workplaces and schools being developed. It is estimated that for every krone invested in Bergen Light Rail, another 15 to 20 kroner will be invested in new projects along the route. Therefore, it also contributes to the City of Bergen’s goal of densification.

The other five main services are serviced by articulated buses. This is an attempt to copy Bergen Light Rail’s success criteria, such as high frequency and a swift and dependable service; although the buses are naturally more dependent on the rest of the traffic situation. In addition to the main services, Skyss has introduced a number of tried and tested principles for efficient and attractive public transport, inspired by colleagues in other European countries and also in the rest of the public transport network. Set intervals between departures, set routes without variation and good cross-connections between the city districts are important elements. Previously, all public transport users had to travel via the city centre, even when this was not the shortest way between two districts.

In 2013, real-time information was introduced to passengers in Bergen and the surrounding municipalities. At terminals and stops at which more than 150 passengers board daily, display panels have been erected that show the departure times of buses in real-time. Real-time information is also available via a user-friendly mobile app, which has become very popular.

With respect to ticketing, Skyss, like many other public transport players in Norway, has experienced challenges. Skyss’ electronic ticketing system was introduced in the period from 2008 to 2010. The start-up of Bergen Light Rail necessitated a self-service ticket system, and the solution was ticket machines at all stops, and also subsequently at terminals and important bus traffic hubs.

The goal of the public transport sector is to have the easiest possible payment solutions. However, a complicated price and zone system in combination with some technical challenges has resulted in the ticket system causing some frustration among passengers. Skyss is now working on simplifying the price and zone system. In order to give passengers more alternatives, Skyss has also introduced pre-defined tickets available from shops and kiosks, and the possibility of buying tickets using a mobile phone. Since January 2013, public transport users in Bergen have been able to buy single and season tickets via a mobile app. Today, more than 300,000 mobile tickets are sold a month, and total ticket sales are approaching six million.

The air quality in Bergen on cold, calm days during winter can be very poor because of the mountains that surround the city. Although car traffic is the main source of air pollution, propulsion technology for buses has become a topic of public interest in recent years. Bergen is the only city in Norway with trolleybuses. While there are currently only six trolleybuses in operation, politicians recently decided to invest and purchase more vehicles plus extending the overhead contact line network. Most of the buses in Bergen still run on diesel, but there are 99 buses that run on natural gas (LNG). From 2016, these buses can start using biogas when a new biogas plant in Bergen starts production.

The prospect of access to biogas has led Skyss to participate in the EU project ‘Baltic Biogas Bus’, aimed at spreading information about and highlighting development opportunities for the use of biogas as bus fuel. In extension of this, Skyss took the initiative to develop a demonstration project where electric buses powered by electricity from a separate biogas engine will be tested in Bergen. Skyss purchased two biogas hybrid buses, which, at 24m-long and with two articulated sections, are the longest buses in Norway. The buses currently run on LNG. A research project has shown that these buses, with their hybrid technology, emit negligible amounts of NOX and NO2. In the long-term, when all the gas buses make the transition to biogas, they will also become carbon-neutral.

In line with strategies

Skyss is continuing its improvement and simplification work in line with the public transport strategy towards 2030. If public transport is to become a real alternative to the car, travel times must be as predictable and short as possible. Traffic congestion is a challenge for buses in the central parts of Bergen, and many people choose to use their cars because the bus takes too long. Road measures that cut travel times for buses, together with measures to restrict car traffic, e.g. with respect to parking opportunities, will be important factors in changing this.

The goal is public transport-oriented urban development, with a denser development pattern than has been usual until now. A coordinated effort by many players is required, not least in urban development and road infrastructure, if the goal of zero growth in car traffic is to be achieved. Skyss is working on improvements within its own areas of responsibility, at the same time as we want to be a driving force and provide background documentation and professional input to other stakeholders.

Established in 2007 and is an administrative entity with responsibility for public transport in Hordaland County, including express boat and ferry services. Politically governed by Hordaland County Council, Skyss has an annual budget of around NOK 2 billion (approximately €244 million).

Norway’s third biggest county, with a population of around 500,000.

Norway’s second biggest city, with a population of around 270,000. Bergen has 75% of the labour market in Hordaland, but only 7% of the land area.

Oddmund Sylta has spent his entire career working in the transport industry. He has had leading positions in railway management for the Norwegian State Railways (NSB), in the passenger ferry company Fjordline and in Scandinavian Airlines (SAS). Oddmund has led Skyss since it was established in 2007.