How Malmö is keeping up with public transport demand

Malmö, located in Skåne County in southern Sweden, has been transformed from an industrial city to a ‘knowledge’ city during the past 20 years. The establishment of a university and investments in infrastructure have contributed to Malmö’s growing population over the past 30 years as well as creating new employment opportunities. Today the city boasts a population of some 315,000. Milan Obradovic – Chair of the Technical Committee in the city of Malmö – gives details of how the city is keeping up with public transport demand. 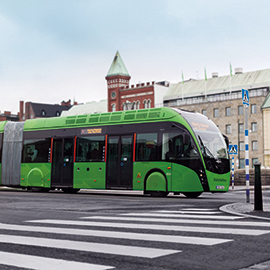 In 2000, the combined rail and road bridge to Denmark was opened, providing a link to Copenhagen International Airport. Malmö, and Sweden, now have a fixed connection southward to the Continent, making travel to Europe easier, while at the same time the housing and employment markets in Malmö and Copenhagen now enjoy much closer ties to one another. The Fehmarn Belt Tunnel is planned for completion in 2021 and will provide even faster transport links to and from the rest of Europe, for both passenger and goods traffic.

It became even easier to travel to Europe in December 2010, when the City Tunnel was opened. A 6.5km-long, bored tunnel under Malmö, cutting the travelling time between the city and the rest of the county as well as towns and cities across the entire region. This also created two new stations in Malmö – one in the city centre and one in the development area of Hyllie. From here Copenhagen International Airport is only 14 minutes away by train. It was in this area, in the Malmö Arena, that the 2013 Eurovision Song Contest was held before a jubilant public and 170 million television viewers. Currently a new residential district with 9,000 homes, offices employing 7,000 people, a number of hotels, northern Europe’s largest shopping centre, an exhibition centre and new swimming baths are all being built in this area. All of this made possible by the City Tunnel and a centrally located station.

The City Tunnel has also provided us with the opportunity to develop local train services in the region. Ystad in south east Skåne benefited from increased levels of traffic and in December 2015 a commuter train service to Trelleborg will open. Small towns along the line will now have stations to make their planned expansions possible.

Malmö is still in need of continued, energetic investment in public transport. The accelerating increase in population demands solutions that are sustainable in the long-term and that provide economic, social and environmental benefits. The development of public transport is vital in linking the city’s outer suburbs with the centre and to strengthen integration between the cities various districts. Malmö is therefore working to improve the current public transport system, while at the same time studying the city’s future public transport requirements.

2014 saw the inauguration of the Malmö Express, a 24m-long, bi- articulated bus, powered by hybrid gas/electric technology. The line is Skåne’s major bus route. Malmö Express is a new concept intended to create a smarter, more flexible means of transport within the city. It is the result of close cooperation between the City of Malmö, Skånetrafiken and Nobina. The purpose is to develop the current city bus network in accordance with the adage ‘think tram, drive bus’ in order to offer customers a simpler, faster and more comfortable journey. Buses operate along their own centrally located lanes with signal priority at junctions and boarding through all doors. This ties together city areas such as Rosengård with the city centre, university and the sea at Västra Hamnen. Since the line was opened in June 2014 the number of journeys taken has increased significantly.

An investigation is also under way to assess the conditions for a possible tram system. The first phase of this would be lines between Stenkällan/Rosengård–Västra Hamnen–Lindängen. Malmö is growing as is its population, and along with this the use of public transport. This is positive for the city’s environment, its air quality and climate. However, in order to ensure that all those who wish to travel on public transport in Malmö can continue to do so in the future, the network now needs to be extended. Five years of investigation makes it abundantly clear: through the use of tramways, Malmö can take a further step towards an environmentally-friendly, safe, comfortable and accessible transport system. Right now, in-depth inquiries are taking place regarding the practical details and economics.

The City of Malmö is also planning within the next few years to introduce local train services with new stations along the Malmö Ring Line, linking old tracks in the city with the City Tunnel.

The City of Malmö is collaborating with the City of Copenhagen on investigating the possibilities for extending Copenhagen’s metro system to Malmö. This would reduce travel times between the cities and further increase capacity over Öresund, thereby strengthening integration and growth in the area.

Even though collective traffic is of great importance and is being extended in Malmö, we are also developing the cycle route network in the city. Malmö has 470km of cycle routes and more are being built every year. In 2014, Malmö was ranked in 7th place in the Copenhagenize Index of Bicycle Friendly Cities. Links between public transport and cycling in the city are important; in Malmö this is called Bike & Ride. Bicycle parking garages adjacent to stations have a capacity of up to 2,000 bicycles. At these Bike & Ride facilities there are other services such as workshops, toilets and lockable spaces, for both cycles and associated equipment. It should be a simple matter to park ones bicycle and change to a bus or train.

Since 2014, Milan Obradovic has been Chair of the Technical Committee in the city of Malmö and Member of the city’s Executive Board. Between 2008 and 2013, Milan was Chair of the city’s Environmental Board. Between 2011 and 2013, Milan was Head of the Eurocities Environment Forum and since 2014 has been Head of the Eurocities Mobility Forum. Before he became a full-time politician in 2008 and he had a position as Head of ICT within the church of Sweden.