A smarter and greener Stockholm with extended metro

Stockholm is one of Europe’s fastest expanding regions. The city’s rich and innovative environment, good job availability and unique interconnectedness between the sea and the city attracts approximately 40,000 new inhabitants annually. The rapid influx of people requires investments in both new public transportation and new residential areas. The extension of the Stockholm metro is part of this great undertaking and Riggert Andersson, Head of the Extended Metro Administration at the Stockholm County Council, provides further details. 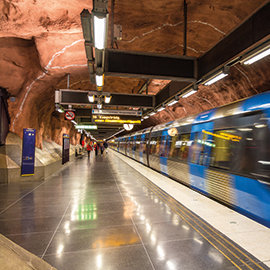 I started my work with the extension of Stockholm’s new metro about one year ago in connection to the launch of a new administration solely dedicated to constructing the extension of the metro, called the Extended Metro Administration. During the first year of operation, we have already come a long way in the planning process. Simultaneously to hiring staff and building a new team, planning has progressed at a rapid pace. We have an ambitious plan and by 2016 we intend to start construction on some of the new extensions. During 2016, we will also enter an intense period of tendering of construction contractors. Our current work constitutes the foundation that will enable us to carry out the extension in an effective manner in terms of both time and budget, while also considering the environmental impact and ensuring close citizen cooperation. While the vast majority of Stockholm residents support the planned extensions, we understand that the construction will not go unnoticed.

The oldest parts of the Stockholm metro dates back to the 1950s and substantial extensions were made throughout the following three decades. Since then, the metro has been a natural part of everyday life in Stockholm. It takes us between our homes and workplaces and constitutes a vital lifeline for everyone visiting our city. The characteristic metro sign from 1958, ‘T’ for ‘tunnelbana’ (metro in Swedish), has become a well recognisable symbol of Stockholm. The new extension will be the most comprehensive since the completion of the Blue Line in the 1970s and is an important piece of the puzzle for the development of the entire Stockholm region.

In 2013, an agreement was reached to extend the Stockholm metro, the so-called Stockholm negotiation (Stockholmsförhandlingen). The agreement states that the metro is to be extended while, at the same time, new residential areas are built along the route of the new lines. Thus, the project simultaneously contributes to an improved provision of public transportation and an increased supply of homes in a rapidly expanding city. As part of the Stockholm negotiation, six partners have committed to extending the metro system with 10 new stations and roughly 20km of new tracks: the Stockholm County Council, the Swedish state and the municipalities of Nacka, Solna, Stockholm and Järfälla. All partners will contribute to the extension financially, with the largest share coming from the state through congestion charges in Stockholm. The cost of the metro extensions will be €2.1 billion, with the combined investments for the extension, including trains and depot, totalling €2.8 billion.

The four municipalities will also build 78,000 new homes in proximity to the new metro. It is a welcome addition in a region that for years has had a substantial housing shortage. With the new metro comes new opportunities to densify existing neighbourhoods and establish new urban areas.

The world’s longest art exhibition gets even longer

The new metro will be completed around 2025. An important parameter for the accessibility and experience of traveling with the metro is the artistic design of the platforms and entrances at the new stations. The Stockholm metro has been called the world’s longest art exhibition and has a proud history of integrating works of art into its station designs. This is a tradition that we will continue. Currently, the administration is working to identify artists who want to partake in shaping the station experience of tomorrow.

The new metro creates a new northern hub in the region

To the north, the Blue Line will be extended with two new stations, for the first time integrating Järfälla Municipality into the metro network. In connection with this, the municipality has committed to constructing 14,000 new homes in proximity to the new stations. Most of these will be built in the new urban area Barkabystaden, at the site of an old airfield. This construction is expected to start in 2016 as the administration has already come a long way in the planning process.

We have investigated which station locations best meet the goals of the new metro. Primarily, our plan is aimed towards facilitating travel for as many passengers as possible, creating good conditions for new housing, while also considering the environmental impact. Additionally, technical preconditions and costs have been examined and the opinions of the public and other stakeholders in the area have been taken into consideration.

Based on this input, we have determined the exact route of the metro and decided where the two new stations will be located. New and improved public transportation as well as many new homes means that Järfälla is expected to grow from 70,000 inhabitants today to 100,000 inhabitants by 2030.

Within Järfälla, Barkaby will become a new regional hub in western Stockholm with opportunities for commuting, both to the centre of Stockholm and to neighbouring cities to the west and north. The new stations in Järfälla are due to be completed by 2021.

With the new metro, today’s Green, Red and Blue lines will be complemented by a fourth – the Yellow Line. The new line will have three stations and will run north to the City of Solna. It will supply the brand new urban centre Hagastaden, which connects central Stockholm with the City of Solna. Hagastaden, with its 5,400 new homes, is partly built on an overbuild of the expressway that today forms a barrier between Stockholm and Solna.

The Yellow Line will facilitate commutes to the large workplaces in Arenastaden as well as to Karolinska University Hospital and Karolinska Institutet, which together employ approximately 12,000 individuals and receives many visitors.

The new metro line will also improve accessibility to Sweden’s new national football stadium – Friends Arena. As part of the agreement, the City of Solna is constructing 2,100 new homes at Arenastaden.

When the new commuter train line Citybanan begins operating in 2017, Odenplan will become a new central hub in the heart of Stockholm, which is further augmented thanks to the addition of the Yellow Line station.

We are currently planning the exact route of the Yellow Line, a process that will be completed during 2015. At the end of 2016, construction of the new line will begin and by 2022, trains will run all the way from Arenastaden to Odenplan.

The metro’s bottleneck is relieved

From Kungsträdgården, currently an end-station, the Blue Line of the metro will be extended southwards to a new station at Sofia, on eastern Södermalm. This station will be located between 90m and 100m below the surface. The reason for this is that the entire metro will be constructed in rock and in order to run beneath the most inner part of the Baltic Sea in Stockholm, the tunnel has to run this deep.

This will make Sofia the deepest station in the entire Stockholm metro system. We are currently looking at solutions with fast elevators for the passengers. For this, we have taken inspiration from similar stations in Barcelona.

The southern branch will connect to one of today’s Green Lines. By converting it from Green to Blue and giving it a new route through the city, the other two Green branches to the southern suburbs will be relieved. This enables denser traffic on the tracks, as well as more inhabitants along the branches. The City of Stockholm will build approximately 40,000 new homes in accordance with the Stockholm Negotiation, most of which will be located in this area. For example, many new homes and businesses are being planned in the Meatpacking District (Slakthusområdet), where a new metro station will be built.

Nacka, to the southeast, is one of the fastest growing municipalities in the region. It is expected to grow from 95,000 inhabitants today to 135,000 in only 20 years and has committed to the construction of 13,500 new homes.

The locations for the new stations in Nacka are planned in a way that enables easy changes from buses to local trains.

With the extension of the Blue Line, today’s heavily trafficked route in the southern part of central Stockholm will be relieved through the addition of a brand new passage between the northern and southern parts of city.

Construction of the metro to Nacka and to the south is expected to start during 2018 and will be completed by 2025.

Riggert Andersson is Head of the Extended Metro Administration at the Stockholm County Council with overall responsibility for the extension of the metro. He has previously led work on a number of large infrastructure projects in the capital including Citybanan, an extension of the network of commuter trains in central Stockholm, as well as the Stockholm Bypass, a motorway running through a tunnel west of central Stockholm.