Istanbul is the largest city in Turkey, constituting the country’s economic, cultural, and historical heart. With a population of 13.8 million, Istanbul forms one of the largest urban agglomerations in Europe and has a unique feature as the city spans two continents – Europe and Asia. With ever-increasing population numbers, Istanbul is faced with public transport challenges to meet demand. UITP’s Head of Training Kaan Yıldızgöz provides details of how Istanbul is fighting the problems of capacity… 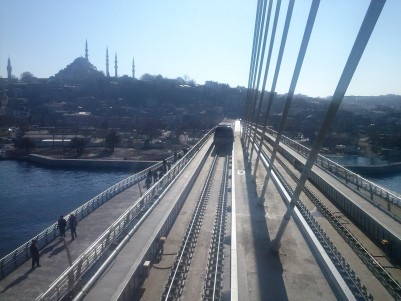 Urban transportation is one of the current key problems of Istanbul and the challenge continues to grow with the rise of population numbers and an increase in income levels which is bringing a higher rate of private car ownership to the city. Between 2000 and 2012, Istanbul’s population increased by 38.3%, and the population of Istanbul is projected to reach 16.6 million by 20161.

Istanbul has one of the largest urban transport networks in the world. In recent years it has experienced a rapid growth of car ownership; there are 3.3 million registered motorised vehicles in Istanbul. Every day, 400 new vehicles add to the city’s traffic congestion. Like many metropolitan areas throughout the world, the city has been working very hard to upgrade its transport infrastructure and boost public transport services to meet the demand and reduce congestion and pollution.

Urban transportation is the hot topic on the agenda of decision makers and several projects have been introduced to help increase the supply-level of public transport services.

The Istanbul Metropolitan Municipality has recently launched its future vision for railway transport. As part of this vision, the ultimate aim is to create a 641km-long metro network by 2023 which coincides with the centennial anniversary of the Republic of Turkey. This vision is one of the greatest commitments and embodies the UITP’s vision for doubling public transport market’s share worldwide by 2025 (PTx2).

One of the most important urban transport investments in the world, the Marmaray tube tunnel under the Bosphorus Strait of Istanbul, started revenue services in October 2013, linking Asia and Europe with a rail public transport system – realising a 148-year-old dream. The engineering feat spans 13.5km to link Europe with Asia approximately 60m-below the Bosphorus Strait. It will carry subway commuters in Istanbul and after the completion of other phases of the project it will serve high-speed and freight trains. As well as the undersea rail tunnel section under the Bosphorus, the Marmaray project also consists of the modernisation of existing commuter lines between both the European and Asian sides of Istanbul, plus the procurement of new rolling stock to be operated along the route. Once the rest of the project is completed (estimated 2016), the line will ultimately run for 76.3km from Halkalı in the west (Europe) to Gebze (Asia) in the east. With a capacity of 75,000 passengers, one way per hour, the line is expected to carry one million passengers per day.

Turkey’s first Unattended Train Operation system is also soon to be open in Istanbul in 2015 – the 20km-long Uskudar-Umraniye-Sancaktepe Metro System. 2015 will also bring an additional 17.8km urban rail line with other projects opening in the city.

According to Istanbul Ulasim, the municipality-owned urban rail operation, with the projects currently under construction and in the design phase, as well as the increasing network effect and enhanced connectivity, the ultimate vision for 2023 is to have a metro network where 72.5% of all public transport trips are made, vis-à-vis a road transport network with a modal share of 26.5% in public transportation.

Currently in Istanbul, bus transportation is the main mode of public transportation. There are 6,297 buses in operation in the city; 3,059 buses are operated by IETT General Directorate (Municipal Entity established with specific law), 1,085 by Otobüs AS (Municipal Company) and 2,153 by individual private operators working under the license of IETT. IETT carries approximately 1.7 million, Otobüs AS 800,000, and individual private operators carry 1.4 million passengers/day2.

In response to the rapid population increase, the city of Istanbul also developed mass bus rapid transit solutions to satisfy heavy passenger demand in the short-term.

The 52km-long Bus Rapid Transit (BRT) System of Istanbul (locally known as Metrobus) carries around 800,000 passengers per day. Istanbul’s BRT was implemented on the main highway of the city where two lanes were taken away from private cars and dedicated to public transport. With 1×1 lanes, Istanbul’s BRT system offers a capacity of more than 30,000 passengers per hour per day during peak hours where they operate double articulated high-capacity buses with headways of 20 seconds. The Istanbul Metrobus is the first BRT service in the Middle East. The first BRT route with a total length of 18.5km began operation in September of 2007. The route has since been extended to 52km-long with 45 stations. The operation of the Metrobus has significantly reduced travel times, traffic congestion and air pollution. Since the operation of Metrobus in 2007, 1,296 minibuses have been eliminated from the market, therefore, improving traffic safety and air quality. Furthermore, 80,000 private car journeys have been reduced per year. In total, 25 tonnes of fuel has been saved2.

Another important characteristic of Istanbul’s BRT system is the time period of the construction. Construction of the 18.2km-long first phase was completed in a record seven months during 2007.

In recent years mass transit systems have been introduced on many of the high-capacity minibus corridors. But, minibuses still play an essential role in the urban transport system of Istanbul; there are about 7,000 minibuses in operation, owned and operated by private individuals carrying more than two million passengers per day.

There are also other projects on-going in Istanbul or under implementation which will have an important impact on urban transportation, including:

Kaan Yıldızgöz was the first student of Istanbul Technical University to graduate in 2.5 years on a four-year long Management Engineering Programme. He also holds a Master’s degree from Marmara University in International Business Administration and he completed the ‘Infrastructure in a Market Economy: Public Private Partnerships’ Executive Education Programme of Harvard University. In 2004, Kaan started to work for Istanbul Ulasim as an Advisor where he was appointed as Quality and Corporate Development Manager in December 2005. At the same time, Kaan also served as Turkey Office Manager of UITP between May 2007 and July 2008. In July 2008, he became Head of CRM and Customer Loyalty at Turkish Airlines. Kaan served as a Consultant in various areas of transportation from aviation to urban mobility in different countries as part of projects of his own consulting company, Urbanfra. Between 2012 and 2014 he worked as Senior Manager of the UITP MENA Centre for Transport Excellence in Dubai and Head of the UITP Turkey Office in Istanbul. Kaan now holds the position of Head of UITP Training at their Headquarters in Brussels. He has participated in numerous international conferences and training programmes as a speaker and he was part-time teaching staff at Istanbul and Bahcesehir Universities between 2010 and 2012.