Vienna – the Austrian capital – is rapidly growing and, for many years in a row, has been rated as the city with the highest quality of life in the world. Vienna’s population has grown used to this headline in recent years. At the beginning of 2014, Vienna had a population of exactly 1,765,649, an increase of 24,000 from the previous year. The city has seen its population grow by approximately 200,000 inhabitants since 2000. Statistics Austria expects that Vienna will be home to over two million people by 2029 – however, this presents significant challengers for the city’s administration, particularly in the field of transport, writes Günter Steinbauer – CEO of Wiener Linien – the city’s provider of transport services… 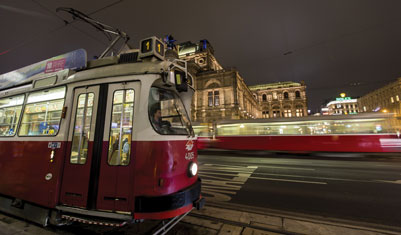 The role of Wiener Linien here is of considerable importance given that, as things stand today, 39% of all journeys in the city are made on public transport – making it the first choice for inner city mobility.

Public transport in Vienna is a success story and the Viennese value their public transport services. It is therefore no surprise that the one billion passenger barrier will be broken in the next few years. The roots of this success can be found in the ongoing work to expand the infrastructure in line with urban development, together with transport policies such as lowering the price of an annual season ticket to €365.00. However, it is not just fair ticket prices that make Vienna’s public transport system so attractive. Another factor behind the rise in the number of people using public transport is the growth of the population of the surrounding areas, which has being increasing at a faster rate than previously thought. This has led to a greater flow of commuters, creating a need for high-quality public transport to the city and around the city itself, including trains, underground lines, trams and buses. The expansion of the rail network, including projects such as the new west bound line, ‘Neue Westbahn’, coupled with the fact that capacity levels have been reached for private motorised transport (as result of high fuel prices and the enlargement of the area subject to parking space manage ment), also means that more people are switching to public transport.

Despite rising passenger numbers and the associated challenges for operations and infrastructure as a whole, satisfaction levels among Wiener Linien customers continue to rise. According to a recently published study, 98% of our customers give Wiener Linien a positive rating, with an average response of 1.8 on scale from 1 (excellent) to 5 (inadequate).

Nevertheless, the city administration and municipal companies are faced with the issue of how to maintain the high standard of living as the population continues to grow. The biggest challenge of growing cities is the future problem of a lack of space. Here, public transport is problem-solver Number One. This also means that Wiener Linien, as the city’s provider of transport services, is also confronted with enormous challenges. With the population forecast to increase by around 250,000 between now and 2033, the answer cannot lie in extending individual tram lines or creating a new bus line. What is needed is a comprehensive solution that combines public transport with pedestrians and cyclists. The trend towards green mobility also includes motorised traffic with technological developments such as e-mobility.

The high quality of the public transport system in Vienna cannot therefore be maintained in the long-term by means of a bypass or inserting a ‘stent’ to widen the vessels. New, high-performance arteries are required to safeguard the vitality of the city.

Wiener Linien already transports 2.5 million customers every day. If the modal split remains the same, we will transport around 2.9 million passengers every day in around 20 years’ time. It will not be possible to keep the expected level of operational quality and comfort our passengers are accustomed to without taking forward-looking, capacity-boosting action. The technical system limits have already been reached on the U3 and U6 underground lines (which already operate at intervals of between two and five minutes), as well as on the lines 6, 43 and 13A. One third of all passengers travelling on more than 170 lines use just these five lines.

It is all the more pleasing to see that the city council has made a clear commitment to further expanding the public transportation network and has provided an important response to the challenges of the future through the expansion of the U2/U5 lines. Following in-depth studies for passengers and urban development, it has been concluded that building the U5 and extending the U2 represent the best way to develop Vienna’s public transport network. The underlying route of the U5 has already been examined in feasibility studies. The construction and extension work will solve several problems faced by Vienna’s public transport network in one fell swoop and will provide direct relief to highly frequented lines. The burden on heavily crowded transfer hubs such as Meidling train station, the Main Railway Station (Hauptbahnhof) and Schottentor will be lightened. The future underground station at Matzleinsdorfer Platz will ensure an optimum link to suburban railway lines and regional trains.

The construction work will close a gap in the inner-city underground network, whereby built-up areas in the inner districts will be connected to those in the west and south of Vienna. High-grade transfer hubs will be created at stations such as Rathaus, Neubaugasse and Pilgramgasse. Moreover, in the second phase of its construction, the U5 will establish a second underground line connection to the Vienna General Hospital and a transfer hub at Vienna’s largest tram junction.

The U2 extension line from Rathaus to Matzleinsdorfer Platz will have a significant impact on transport as a result of the many connections to the existing network. The U5 extension from Rathaus to Elterleinplatz will provide relief to crowded tram lines and an optimum link between the districts of Hernals and Währing.

By the same token, increasing the use of bus lanes and timing traffic lights to give priority to public transport are required to ensure speed and thus a greater degree of attractiveness.

The resulting balance in respect of network capacity across the whole system ensures passenger comfort, reliability and excellent service over the long-term.

Approximately 250,000 people will live and 120,000 will work in the catchment area of the U2/U5. Thousands of jobs will be created by the construction work over a total of nine years. Vienna’s position as a hub of economic activity will be strengthened as a result of improved accessibility through public transport.

The decision to continue with the construction of underground lines, in particular the construction work for the U2/U5, is the right one. The underground network will be extended to places where it will be needed the most in the years to come. Hundreds of thousands of people will directly benefit and the Gordian Knot will be solved by relieving the strain on dozens of lines. The success enjoyed by the underground safeguards a level of attractiveness that will ensure that public transport remains the number one choice for journeys made in Vienna. The joint environmental alliance will be improved on a lasting basis and the strain on the roads will be reduced.

This underground construction work, combined with the targeted extension of the tram and bus network (as a coordinated, integrated system), ensures that Vienna’s urban development goals will be achieved and provides the infrastructure required to guarantee mobility in the city of Vienna.

The political commitment to extending the network in Vienna is clear, however a lot of water will flow down the Danube (as the Viennese like to say) before the construction work actually begins. The plan is to begin building the underground lines in 2018, with the first phase not due to enter service before 2023 at the earliest. So how can we get the Viennese interested in the construction work and an underground line that only exists on paper at the moment?

When Wiener Linien started an online vote on the future colour of the underground line, this triggered a hype about the U5 that we would never have dared dream of as a transport company. In a little under three weeks, 143,000 passengers chose between the colours turquoise and pink, thereby deciding the colour that will dominate Wiener Linien’s signage in the future.

At the end of the vote, turquoise was the clear favourite. Through this small act of communication, which was accompanied and promoted by our corporate communications department across all channels, we were able to keep the issue of extending the underground network in people’s minds and generate a great many headlines about the underground construction work. And it was proved once again that Vienna’s population is very interested in its public transport.

Another step in this early phase of communication involved presenting the logo that will be visible for the entire duration of the planning and construction phase. The two ‘docked’ die of the two lines in their respective colours symbolise the fact that the new lines for the U2 and the U5 form a joint project that should not be seen as stand-alone undertakings. The logo will be used on project information sheets, on construction fences, at events, on resident information notices and on the Internet in the coming years. It has already been used for the first time on the first resident information notice about test drillings that began at the beginning of September 2014.

We are confident that we will be able to keep anticipation levels high, as well as maintaining understanding for the work, through this targeted and open communication style, and that Vienna’s inhabitants will once again be able to count on us. Wiener Linien – the city belongs to you.

Günter Steinbauer has been part of Wiener Linien’s Management Board since 2001 and has been Chairman since 2004. After studying Civil Engineering and Construction, Günter started his career at Vienna’s public transport company. Günter has now been working for Wiener Linien for 32 years and has played an important role in extending Vienna’s underground network.