After completing its biggest ever expansion in its history during the 2003-2007 legislature with the construction of 80km of new network and 90 new stations, Metro de Madrid is now directing its efforts in maintaining a modern and quality metro network – essential to this plan is, of course, effective investment in network maintenance.

Metro de Madrid has multiplied investment in track maintenance by four during the period 2011-2014, going from an investment figure of €5.89 million to the almost €22 million that will be invested by the end of 2014.

As the Metro’s Chief Executive, I am pleased and proud at the way our network has been managed over the last few years; our rolling stock (with an average age of 13 years) have achieved their best availability figures seen in recent years, and work carried out on our tracks – either rail renewals or changes – have included the latest generation of equipment helping to guarantee the safety of the network, plus the use of an ultrasound detection system which detects track-problems before they arise.

During the course of this year, repair work will also be carried out on the metro’s sealing systems, which are a common concern in all metro networks and represent a major item in the schedule of maintenance tasks. It is planned to replace deteriorated sealing systems with new ones at stations including, amongst others: Sainz de Baranda; O’Donnell; Méndez Álvaro; Buenos Aires; and Diego de León.

The outlay on maintenance has been a key factor in the reduction of operating problems occurring on the network. From 2008 to 2013, the number of maintenance events occurring in Metro de Madrid dropped by over 40%. There has therefore been a reduction in train operating problems of 52% and of 26% and 40% in traffic and installations events, respectively. These are figures that are maintaining their downward trend, as so far this year there has been a drop of 44% over the same period in 2008, or 5.3% compared with last year (2013).

As aforementioned, the average age of our trains is 13 years, and they have recorded high availability figures – for example, at 7:30am on weekdays, trains run as high as 97.73% availability – a figure that represents the third best historic value only surpassed in 2008 and 2009 by less than one tenth.

These impressive figures are achieved not only due to the low age of the stock, but also due to the maintenance work carried out on the trains: the 209 long-cycle service schedules and 8,568 preventive maintenance procedures that were carried out in 2013 at Metro de Madrid.

Accessibility on the Madrid underground

Metro de Madrid have an extremely high number of escalators within their network – in fact, they are a world-leader with 1,694 escalators in total. In 2013, escalators operated at an availability rate as high as 97.38% – a figure that has only recently been beaten with 97.62%. 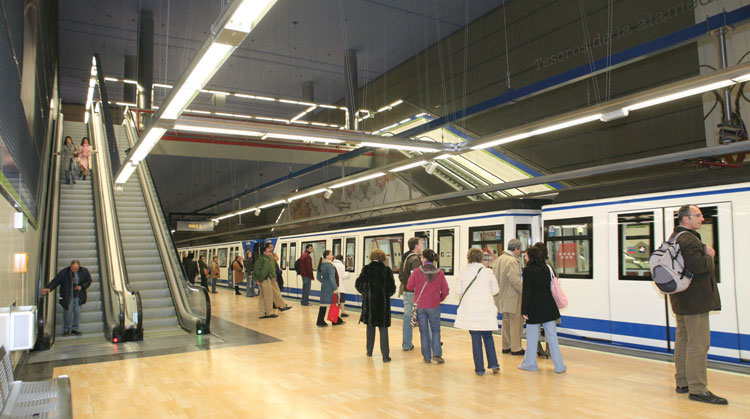 Escalators are an important element for the network, so are lifts and the other items making the Metro stations accessible – they represent a basic factor for users and are one of the features that make the Madrid underground network a world benchmark. An investment of €3 million is therefore planned until 2015 (€1.6 million for 2014) in order to implement an Accessibility Improvement Plan involving the installation of platform edge strips, ceramic path markers, tactile paving, non-slip bands, Braille stickers on escalator handrails, easy-opening access door springs, and other measures aimed at facilitating the use of our network for people with reduced mobility.

To be able to support the quality already seen on the network, Metro de Madrid has designed several ways of obtaining new routes of economic income, including a Real-Estate Plan for which Metro de Madrid will sell disused plots of land, plus continuing to develop and offer innovative advertising opportunities.

After issuing a public tender in July 2014, Metro de Madrid recently awarded its first pioneering advertising contract, which is likely to be seen in tunnels towards the end of 2014; Brodhead Invest, S.L. will be starting up an innovative advertising system in the interior of the tunnels that will enable Metro users to see animated advertisements through the train windows while they travel along the tunnel (in the section linking Colombia and Nuevos Ministerios Stations on Line 8). This pilot project, which has an initial duration of two years and four months (extendible to four years), will generate earnings for Metro de Madrid of more than €200,000 a year over the first two years.

The LED advertising system will be installed on the walls of the tunnel. It is made up of a series of LED pillars, controlled by a central unit. The system is activated by the movement of the train upon interfering with a laser signal emitted from the speed sensors. The control system then measures the speed of the train as it passes, activates the LED pillars and shows the sequences of images in an appropriate manner.

In this way, the moving images appear without sound in front of the passengers in the dark environment of the tunnel. The system uses a combination of electronic and digital technology, architecture and computerised visualisation.

Currently, the LED dynamic advertising system in tunnels is in operation in only a few metro systems around the world such as Hong Kong, London and Santiago de Chile. Madrid will therefore be one of the first cities to put this innovative way of advertising into operation.

Improvements to the Madrid metro

In 2013 alone, Metro de Madrid achieved earnings of €11.4 million thanks to commercial activities, i.e. film shooting and advertising events, which represents 10% more than those obtained during the previous year in the commercial area. 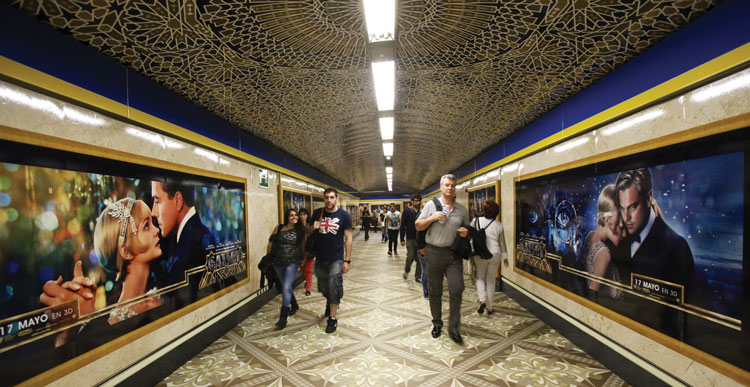 Advertising posters on the Madrid metro

In this respect, during 2013 Metro de Madrid achieved a milestone in the advertising field hitherto quite exceptional in European rail systems, namely the inclusion of the ‘Vodafone’ brand name in the nomenclature of Metro Line 2 and Sol Station. Under this agreement, Metro de Madrid will obtain revenues of €3 million until 2016, the year when the agreement with the telephone operator expires. Metro de Madrid already explored this field the year before with the Samsung brand name. This company also chose Sol Station to promote the – at the time – new Samsung Galaxy Note device, adding the name of the mobile to the name of the most popular landmark station in the Madrid system for one month. The media impact for the company far exceeded all the initial forecasts, representing a major phenomenon for the advertising world and opening up new avenues for other rail systems to bring in additional income on top of that obtained by carrying passengers.

Generating revenue from the Real-Estate Plan

Metro de Madrid will obtain at least €40 million in 2014 with operations in the planning area affecting part of its property assets. It is a case of the first steps of the company’s Strategic Property Plan under which over 95,000m2 belonging to Metro de Madrid and the Community of Madrid will be allocated to residential and commercial use, offices, green spaces and public amenities.

The plan, which lays down the course of action in four areas (Plaza de Castilla yards, lot in Calle Granada-Cavanilles – at Pacífico, Ventas and Cuatro Caminos yards), will represent amenity and urban upgrading for the city of Madrid, besides increased revenues and saving in costs for Metro de Madrid, which will be assigned to maintenance of the quality of service that is offered to users. These actions form part of the cooperation protocol concluded between Metro and the Madrid City Council for the urban regeneration of different points of the city affected by the metropolitan railway infrastructure.

To the €40 million that the company plans to earn in 2014 as a result of operations in this area, we have to add the profits that will be produced by these operations in the coming years. In this way, Metro de Madrid expects a profit of approximately €120 million when the whole plan has been completed, by the end of 2017. The first €40 million that Metro de Madrid expects to invoice in 2014 comes from the initial payments made by the companies purchasing the different development environments, which will gradually pay for the whole of the sale in compliance with the planning milestones that Metro de Madrid arranges with them until reaching the end of 2017 when the plan concludes and the total profit obtained reaches €120 million.

Ignacio González Velayos is a graduate in Business and Labour Sciences from the European University of Madrid, and has also undergone training in fiscal and financial policies by the Centre for Financial Studies at the same university. Ignacio is a Member of the Assembly of Madrid in the legislature, Chair of the Youth Commission of the Assembly of Madrid and also a Member of the Urban Planning Commission of the Community of Madrid. Since 9 July 2009, Ignacio has been the CEO of Metro de Madrid.