It is often said that Britain is becoming two nations – London and the rest of the UK. This is perhaps most clearly demonstrated in passenger transport; London attracts the bulk of the country’s investment in transport. A regulated bus network, supported by substantial public subsidy, is probably familiar to much of Continental Europe, while the rest of Britain has bus services provided for the most part without subsidy by private-sector operators taking their own commercial risk… 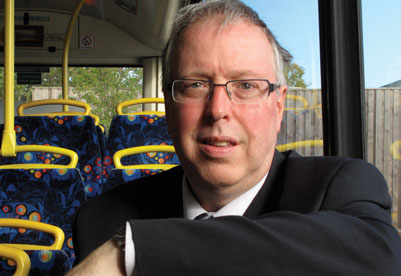 There are pros and cons to both, and local authorities outside London would wince at the suggestion they should provide the same per capita support for bus services in London. And as a World City London, unlike the rest of Britain, has a population density that both supports and requires a very comprehensive bus network.

The UK deregulated bus service model that pertains outside London does have some unique advantages. There is a direct connection between the bus company providing the service and the people they are serving, without any sort of middleman. As a result there is an emphasis on providing a good level of customer care and imaginative marketing. Recently published bus passenger satisfaction surveys show high levels of satisfaction with the service people receive (the survey does not include London).

What is encouraging is an increase this year in satisfaction of users of services in Britain’s ‘other’ city regions, such as Glasgow, Birmingham, Manchester and Leeds: these are all areas which have seen a worrying decline in bus use against a steady rise in London. There are encouraging signs in all of these regions and it is our hope that we will begin to see the decline reversed.

One aspect in which there has consistently been less satisfaction is value for money: with services dependent on passenger revenue and very little external support fares are higher on Britain’s buses outside London than in the capital, and fares across the board tend to be rather higher than those in most parts of mainland Europe.

There are two sides to every coin, and those bus services which are provided fully commercially, which is about 80% of them, are not subject to the stringency currently facing local authority budgets. Local authorities in the UK are under severe financial pressure, from reducing Central Government grants and a ban on increasing local council taxes beyond the rate of inflation. Bus services are a key target for expenditure cuts, but the main bus routes, dependent on farebox revenue rather than subsidy, are generally immune from the effects.

However, there is a raft of services to smaller communities and deprived areas which do depend on local authority finance to keep running, and others where services need support to keep running in the evenings or at weekends. Local authorities have a duty to support socially-necessary services that aren’t capable of being run commercially, though the legislation requiring it is very vague in defining ‘socially-necessary’. As local authority funds become tighter, so people in such communities find their bus services are increasingly precarious, sometimes heightening their isolation where health services and education have been centralised and local shops have had to close.

Community transport, run by volunteers, is increasingly seen as a possible solution, though there are concerns as to the quality and continuity that such services may be able to provide without adequate funding, and as further cuts in local authority spending in the future seems likely, the threat to these more marginal services is ever greater. What appears to local authorities as a useful way of balancing the books is having major impact on the lives of ordinary people and is reducing their chances of improving their economic or personal circumstances.

Nonetheless, bus services in Britain remain the main form of public transport – some five billion passenger journeys are made every year, which is about three times as many journeys as are made by rail.

Bus Users UK will be supporting Eurotransport’s forthcoming European Bus Forum 2014 conference as Media Partner. To be held on 2 July 2014 in Manchester, UK, the event will be hosted by Transport for Greater Manchester and will see organisations attend including Abellio, RATP, Stagecoach, Arriva, FristGroup, Nobina and The Go-Ahead Group.

You can find out more at www.europeanbusforum.com.