During the trial period, Dubai’s RTA gave questionnaires to users in a bid to best determine their needs, opinions and visions for the service. 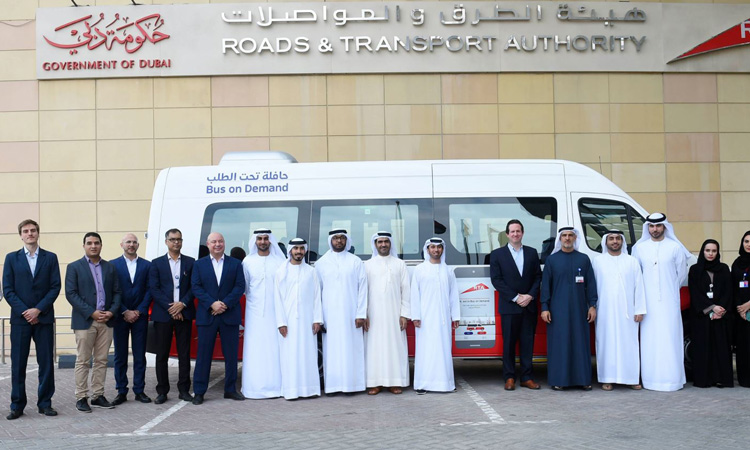 Dubai’s Road and Transport Authority (RTA) has announced the permanent operation of an on-demand bus service in a number of regions of the emirate, after a successful trial period.

Ahmed Hashem Behroozyan, Executive Director of the Public Transport Corporation of the RTA, said: “This bus service is one of the means of transportation based on the principle of the first and last mile. Users can access the service by using a smart application in specific areas of the emirate of Dubai.

“A benefit of this initiative is related to the operation and the environment, as it reduces the walking distance and waiting time for the customers, and improves their experience through the use of high-quality buses. As for the operation, the on-demand bus is smaller and less fuel-consuming and the initiative’s intelligent scheduling system reduces wasted kilometres. As for the environment, the initiative contributes to reducing carbon emissions and reducing private vehicle trips in service coverage areas.”

Behroozyan explained that the trial period allowed the RTA to enter geographical data for the included areas (Al Barsha, Dubai Internet City, International City, The Greens and Dubai Silicon Oasis) so that the passengers and workers in these areas can determine points along the route and track the bus’s movement times until it reaches their location.

He also affirmed that during the trial run of the aforementioned areas, the authority was able to test the efficiency of the service in terms of accessibility for the passenger, the response time and the time period for the bus to reach the target site, where a questionnaire was carried out in metro stations. The survey aimed to determine the needs and visions of the residents and workers in the areas.

The field survey was carried out based on a number of criteria, including population groups used for service, vehicle ownership, transportation options, the nearest stations and public transport stops, preferred options for transportation (walking distance, waiting time, etc.), comfort, punctuality, the proximity of service to homes and transportation destinations and reasonable tariffs.