Berlin has become the first city to introduce a wirelessly charged electric bus in a capital. The project funded by the Federal Ministry of Transport and Digital Infrastructure, has aided the development of electric mobility in Berlin. The Berlin Transport Authority, Berliner Verkehrsbetriebe (BVG), has introduced four Solaris Urbino 12 electric buses equipped with the […] 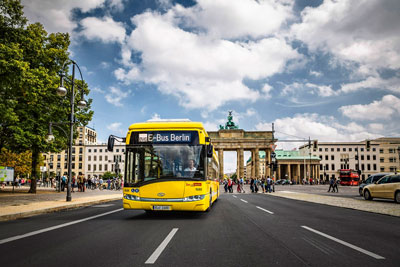 Berlin has become the first city to introduce a wirelessly charged electric bus in a capital.

The project funded by the Federal Ministry of Transport and Digital Infrastructure, has aided the development of electric mobility in Berlin. The Berlin Transport Authority, Berliner Verkehrsbetriebe (BVG), has introduced four Solaris Urbino 12 electric buses equipped with the Bombardier PRIMOVE inductive charging system and traction equipment from Vossloh Kiepe.

The four electric buses now operate on Line 204 between Südkreuz and Zoologischer Garten (Hertzallee). Vossloh Kiepe’s electric drive enables these vehicles to be emission-free with low vibration and noise, benefitting both passengers and the environment. Within one year, the four electric buses on the line 204 will cover at a total of approximately 200,000 kilometres, saving 260 tons of CO2 emissions.  Each bus will be charged wirelessly and contactless with Bombardier’s PRIMOVE technology enabling the buses to charge within a few minutes.

Rainer Bomba, State Secretary of the Federal Ministry of Transport and Digital Infrastructure, explained: “The Federal Ministry of Transport is funding the project with a total of about 4.1 million euros. We want to promote electric mobility in public transport with projects like this. The wireless charging technology that will be used from now, on the line 204, provides low-emission and low-noise transport. This will benefit local residents and transport stakeholders alike.”

Bombardier insists the battery system is adequate to cope with the demands of a capital city. The company highlights the 90 kilowatt hours of battery capacity which will offer sufficient energy reserves to handle even Berlin’s most demanding routes. In addition, the wireless charging system is well shielded so that the electromagnetic radiation is lower than that of a conventional induction cooker. To fully charge the batteries overnight and air condition the passenger compartment before starting operation, four stationary and one mobile charging station were also installed by Vossloh Kiepe at the BVG depot. There the buses are supplied with power via charging cables. 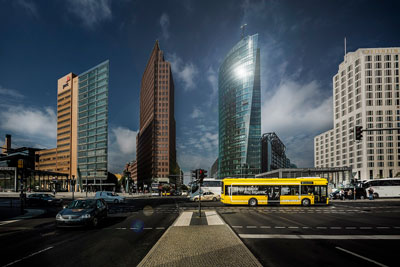 Andreas Geisel, Senator for Urban Development and Environment, spoke at the unveiling: “I am delighted that the electric buses and the inductive charging devices will start operating today. Electric buses on the streets of Berlin are part of a package of measures to facilitate a breakthrough of this environmentally friendly technology. To get the maximum benefit from this practical use, I have also pledged, to the BVG, to support the co-financing of the project from mid-2016, after the Federal funding, until 2023.”

The pilot project “E-Bus Berlin” will provide valuable experience about the operation of battery buses and the Technical University of Berlin, whose research helped determine the necessary charging time and capacity of batteries, is now carrying out a technical and economic evaluation of the project. The operational phase of the e-bus 204 as part of the “Internationalen Schaufensters Elektromobilität Berlin-Brandenburg” will run until autumn 2016.

Speaking at the launch, Dr. Lutz Bertling, President and Chief Operating Officer, Bombardier Transportation said: “The PRIMOVE system opens up new possibilities for electric buses. It offers a wireless charging system that is easy to integrate and comfortable in use. Along with the PRIMOVE high-performance battery, normal bus stops are transformed into inductive charging stations – it doesn’t require additional vehicles or extended stopping periods. After Braunschweig and Mannheim, where the operation with PRIMOVE e-buses has been running successfully, Berlin is the world’s first capital applying our smart technology. The basic idea in developing PRIMOVE was to make electric mobility convenient and suitable for everyday use. And this is not just for electric buses, but for all electric traction vehicles. “

Dr. Andreas Strecker, CEO, Solaris Bus & Coach S.A added: “I am very pleased that we have successfully completed the tests at this stage. Together with our excellent partners, we will now ensure that the electric buses show their strengths in passenger operations. Starting today, Berlin citizens are sure to be convinced of the undoubted advantages of Solaris battery buses in regular service. The most exciting part of the project has begun because the buses can now fulfil their role, by transporting passengers quietly, cleanly and smoothly through the capital city of Germany.”