The FLEXITY tram keys were handed over in the presence of numerous representatives from politics, business and the media at Berlin’s Nordbahnhoff station… 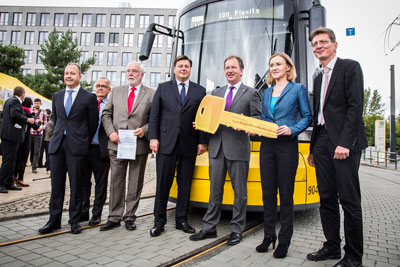 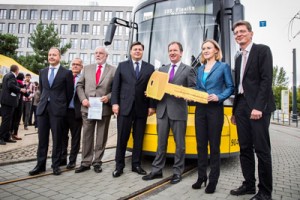 In the presence of numerous representatives from politics, business and the media, the keys were symbolically handed over by the President and Chief Operating Officer of Bombardier Transportation Dr Lutz Bertling to the BVG Chairwoman of the Board Dr Sigrid Evelyn Nikutta at Berlin’s Nordbahnhoff station. A commemoration board with date and logo was also unveiled jointly. With the slogan “The 100th FLEXITY for Berlin – what a fleet”, the tram will be easily recognisable in service through Berlin today and in the future.

Dr Sigrid Evelyn Nikutta, Chairman of the Board and Senior Executive of Operations at BVG said, “The tram – along with underground trams and modern buses – is the guarantor for a contemporary, environmentally friendly mobility in the growing metropolis of Berlin. This applies today, but will especially apply in the future. With the FLEXITY Berlin, we have a vehicle that simply suits Berlin and the BVG. State-of-the-art technology, ecological, fast, comfortable, barrier-free and with a highly acclaimed design. The FLEXITY is valued by our passengers just as much as it is by our drivers – and rightly so.”

Dr Lutz Bertling said, “2015 is a year of anniversaries for BVG. In June, we jointly celebrated 150 years of trams in Berlin and are today handing over the 100th FLEXITY to BVG. With the largest tram network in Germany, Berlin is a city with a rich tram tradition. Bombardier is proud to be a part of this tradition, since all BVG trams for the past 20 years have come from our factory. We would like to express our thanks for the long-standing, good partnership and proven trust.”

In 2008, the success story of FLEXITY in Berlin began with four pre-series vehicles that were tested intensively. On 10th September 2011, the first series production vehicle commenced passenger service, its design having been influenced by feedback from Berliners. The trams were specially designed for the German capital, with inspiration from the Bauhaus style, a design that has already received numerous design awards. The trams enjoy tremendous popularity in Berlin and are distinguished by comfortable entry and alighting, low noise and energy efficiency. At present, 142 items are ordered, these earmarked for full delivery by the end of 2017 so that the entire tram fleet of BVG can be made suitable for people with disabilities.