A new pilot scheme, launched today, will significantly boost the ability to tackle and prevent crime and antisocial behaviour on Greater Manchester’s bus and tram network… 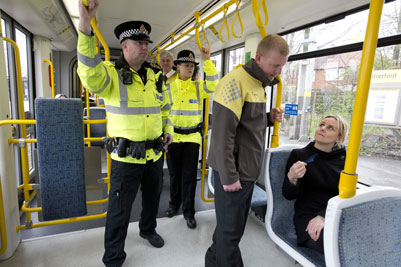 A new pilot scheme, launched today, will significantly boost the ability to tackle and prevent crime and antisocial behaviour on Greater Manchester’s bus and tram network. 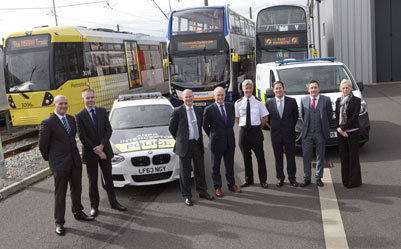 Under the Travelsafe Partnership, a dedicated team of 16 police constables, police community support officers, special constables and security personnel will provide regular patrols on the region’s networks for the next three years.

The establishment of a dedicated team will provide expertise and knowledge that will also assist in the identification of repeat offenders, while the provision of body-worn cameras in conjunction with existing public transport CCTV will help gather evidence for prosecutions.

Where appropriate, the partnership will seek to use legal powers to ban offenders from public transport and deliver restorative justice schemes following prosecution.

The pilot will also focus on preventative measures and youth education, with uniformed officers visiting schools to educate youngsters on the dangers, impacts and consequences of crime, antisocial behaviour and fare evasion on public transport.

The pilot will initially run for three years but will be subject to formal annual reviews and regular scrutiny by a strategy group made up of members from organisations involved.

TfGM Metrolink Director, Peter Cushing, said: “The Metrolink network has been and is going through a period of significant expansion and is proving increasingly popular year on year. As the network evolves, we need to ensure that other services keep pace with it.

“Metrolink has always been a safe and pleasant environment on which to travel and, by launching the Travelsafe Partnership, we will ensure that it remains so.”

Chief Superintendent John O’Hare said: “The public transport network in Greater Manchester has grown considerably as has the number of people travelling on it. Unfortunately this can also attract criminals or inconsiderate people who, by acting in an antisocial manner, can make others feel intimidated.

“Everybody has the right to travel without the fear of crime and our aim through the Travelsafe Unit is to make people feel safe, deter criminality and effectively deal with any incidents that could affect public safety.”

Chris Coleman, Managing Director of Metrolink RATP Dev Ltd, which operates the network on behalf of Transport for Greater Manchester, said: “We have a responsibility to our 80,000 customers that travel daily on Metrolink and to our employees working out on the system to ensure we continue to create a safe environment.

“We’re extremely proud to be involved in this partnership and I see this as an extremely positive step in tackling crime and reducing anti-social behaviour on public transport.  As part of our involvement we will have some of our employees – who are trained special constables – seconded over to the unit as full-time officers.

“More importantly, this initiative will also allow a more joined up approach between all the public transport operators in the region as we’ll be able to share intelligence and target known hotspots for crime and anti-social behaviour in a more cohesive way.  Our employees working out on the network will also appreciate the increased visibility of the officers from the Travelsafe scheme to support them in their daily activities.”

Vicky Tomlinson, Operations Manager, First Manchester said: “We’re delighted to work together with our transport partners to help keep public transport safe. The Travelsafe Partnership will play an important role in addressing those incidents that do occur but also importantly to help communicate the wider positive messages about public transport to young people.”

Matt Davies, operations director at Stagecoach Manchester said: “We are pleased to support the TravelSafe Partnership launched by Transport for Greater Manchester. Safety is our number one priority and while instances of crime and antisocial behaviour on our buses are low the TravelSafe Partnership will provide a reassuring presence for our customers. We take our responsibility to the local community very seriously and believe that this pilot scheme will improve standards even further.”