First West of England will operate the UK’s first Bio-Bus or ‘poo bus’ on Bristol’s service 2 route. The bus was officially launched in Bristol on 17th March and will begin regular service on the 25th March 2015. Human waste from 32,674 households along the route will help to power the vehicle using Biomethane gas. […] 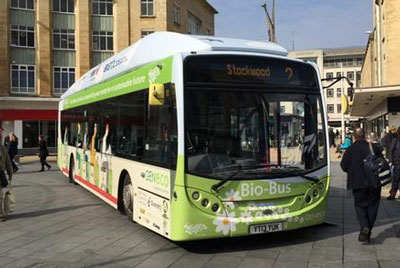 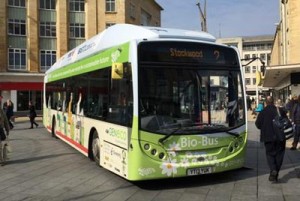 The bus was officially launched in Bristol on 17th March and will begin regular service on the 25th March 2015.

Human waste from 32,674 households along the route will help to power the vehicle using Biomethane gas. If the sustainable fuel source is successful, First West of England will look at introducing more Bio-Buses into operation in the future. Much of that decision rests though on the success of the trial, and the public’s response to the vehicle itself.

Fuelling the ADL Enviro300-bodied Scania Bio-Bus is one of the challenges that First will have to overcome while running the vehicle. While the rest of its fleet can be fuelled in its depots, for the duration of the trial the Bio-Bus will need to fill up at a special site in Avonmouth, where GENeco, the renewable energy and waste recycling company owned by Wessex Water, turns sewage and inedible food waste into the biomethane gas. If the trial is successful and as a result further vehicles are introduced to the route, First would need to find a way to fuel the buses within its depot facilities.

It is predicted that households along the 15 mile route could produce enough waste over the course of a year to run the Bio-Bus for 4.1million kilometres (2.5 million miles).

James Freeman, Managing Director of First West of England, commented on the launch: “Since its original unveiling last year the Bio-Bus has generated worldwide attention and so it’s our great privilege to bring it to the city, to operate – quite rightly – on Service 2.

“The Bio-Bus previously made an appearance running between Bath and Bristol Airport at the end of last year, but its only actually been used once before in the centre of Bristol itself. That was on the official launch weekend of the Bristol Green Capital year – when we ran free round-trip journeys on it. From its first outing though it’s turned heads, and we expect interest in this vehicle to be maintained for the entire time we have it.

“The very fact that it’s running in the city should help to open up a serious debate about how buses are best fuelled, and what is good for the environment. In this Bristol Green Capital year that conversation is more welcome than ever.”

The Bio-Bus can seat up to 40 people, with space for one wheelchair. The Bio-Bus will help to improve urban air quality and is said to produce fewer emissions than traditional diesel engines.