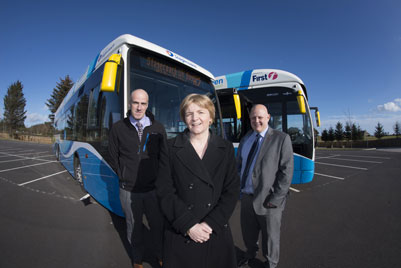 Europe’s biggest fleet of hydrogen buses will soon be carrying passengers across Aberdeen as part of an Aberdeen City Council-led project to boost the hydrogen economy.

Operators Stagecoach and First today announced the routes on which the green vehicles will be ferrying the public, as the final preparations ahead of the launch of the new services get under way.

The six-strong Stagecoach fleet will operate on the X17 Aberdeen city centre to Westhill route, while the four First Aberdeen vehicles will be in operation on the X40 Kingswells to Bridge of Don Park and Ride service.

Councillor Laing said: “We are entering a really exciting stage of the Aberdeen Hydrogen Bus Project, with First and Stagecoach preparing to launch the buses on their services and take a new and exciting form of transport to the Aberdeen public.

“The route announcements today are a clear commitment by the companies to bring these buses into public service in the very near future, once they have completed their driver training and the hydrogen refuelling station is fully commissioned, and I am quite sure the travelling public will be as excited as I am to have the opportunity to travel on these buses.

“The Aberdeen Hydrogen Bus Project has created a huge amount of interest not only in Aberdeen, the UK and Europe, but across the world. These buses will not only help us to realise Aberdeen’s aspiration of becoming a world-leading city for low carbon technology, but also to maintain our position as a leading world energy city, while improving the city’s environment and city centre air quality.”

The hydrogen fuel cell buses, made by Belgian firm Van Hool, were brought to the city as part of the £19million Aberdeen Hydrogen Bus Project – which is led by Aberdeen City Council-led project and has backing from Europe, the UK Government and the Scottish Government as well as a broad range of private sector partners. It is the most high-profile of a range of projects designed to create a hydrogen economy in the city.

It will deliver a hydrogen infrastructure in Aberdeen in 2015. This will include the production of hydrogen from a 1MW electrolyser and establishing the UK’s first commercial-scale hydrogen refuelling system, which will include hydrogen production through electrolysis, in partnership with BOC.

Stagecoach North Scotland managing director Steve Walker said: “We very much look forward to introducing these new state-of-the-art vehicles to our customers and to making our bus fleet even greener. The X17 service is used by thousands of people every week who will benefit from this new technology. We hope they will enjoy these new vehicles and we look forward to attracting even more people out of their cars and on to our greener, smarter bus services.”

First Aberdeen managing director David Phillips said: “We are delighted to be a partner in this exciting and ground-breaking project for Aberdeen. The hydrogen-powered vehicles will be a fantastic addition to the city and will help support our ongoing efforts to improve services and encourage more people to swap the car for the bus.

“They will complement the micro-hybrid vehicles added to the First Aberdeen fleet last year, one of the world’s most fuel-efficient and environmentally friendly buses. We’re looking forward to welcoming customers on board soon.”

Transport Minister Derek McKay said: “We are pleased to be supporting this impressive project which will see zero-emission hydrogen buses hit the roads of Aberdeen City and Shire, helping to meet Scotland’s climate change legislation targets and improve local air quality. Aberdeen City Council can be proud of taking forward this project through to fruition and the level of interest from other cities around the world is testament to its importance as an exemplar for cleaner, greener mass transport.

“A journey on one of the new fleet will be the first encounter that many members of the public will have with a zero-emission vehicle. In addition to the environmental benefits, the smoothness and quietness of the hydrogen buses will undoubtedly add to the attractiveness of public transport as a travel choice.”

The use of hydrogen as a transport fuel offers great promise as a key component of a low carbon energy system. Hydrogen fuel cell vehicles emit no harmful emissions, and are virtually noise free.

The project is part of the H2 Aberdeen initiative, which provides the opportunity to create a new industry and greater choice in energy production and usage, as well as enabling the development of a hydrogen strategy for the Energetica Development Corridor.

It is also part of the HyTrEc (Hydrogen Transport Economy) transnational project which involves: working with EU partners around North Sea to facilitate transnational co-operation and learning; enhancing the competitiveness of the North Sea Region in hydrogen development; and providing a platform for joined-up working towards a hydrogen strategy across the North Sea region.