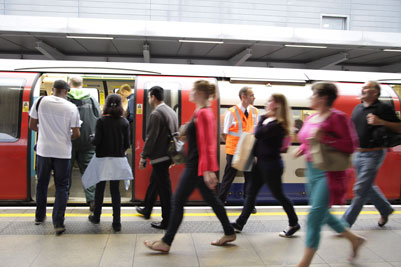 Transport for London (TfL) revealed today that last week (week ending Saturday 13 December) was the busiest week on the Tube in its history.

The London Underground (LU) network carried over 28.346 million people in that week. This exceeded the last record-breaking total reached in the week ending Saturday 13 August 2012 during the London 2012 Games when 28.235 million journeys were made.

The latest passenger figures follow LU’s 2013/14’s record performance when it carried 1.265bn passengers – up by a third over the last ten years, following unprecedented levels of infrastructure and performance improvements

Nigel Holness, LU’s Operations Director, said: “This record breaking week comes after we broke the daily record for passenger numbers on the Tube twice in three weeks last month.  This clearly shows that there is an increasing demand to travel on London Underground and that continued investment is crucial to help continue to modernise and improve the Tube network for our customers.

“Those who travel on the Tube have already benefited from the upgrades of the Jubilee and Victoria lines.  This is in addition to the work that is currently being undertaken to transform the Northern, Circle, District, Hammersmith & City and Metropolitan lines as well as significant work to many stations across the network. We need to maintain this pace of modernisation to ensure that London Underground is a network that is fit for the future.”

London’s population is set to grow from 8.4m today to around 10m by 2030 – that’s an extra Tube train full of  people every three days – and it is therefore essential that there is continued investment in increasing services and transport infrastructure to meet this increasing demand.

Making journeys on LU has become easier over the years. The Oyster card system provides an easy way for people to pay for their journeys and contactless cards are now accepted for travel on the LU network. More than 19 million journeys have now been made using contactless payment cards since the launch of the new convenient way to pay on 16 September.