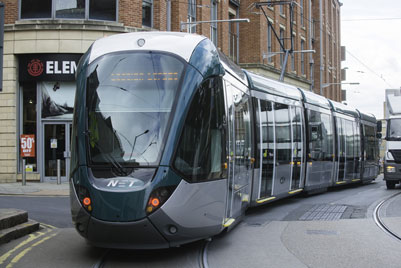 Alstom delivered the last of the 22 Citadis trams for Nottingham Express Transit (NET). While five of them are already on service on Line 11, the 17 others – presently being tested – will enter service next year on the expanded NET network.

The network will be composed of two tramway lines departing from Nottingham station to serve the south and southwest of the city. With up to 10 million passengers per year on the existing line, the expanded network will increase capacity to an estimated 23 million passenger a year. The extension to the network, which is being built by Alstom with joint venture partner Taylor Woodrow, totals 17.5 km and has 28 stations, taking the extended network to 32km and 51 stations.

Terence Watson, Alstom UK President, said: “We’re delighted to have delivered the final Citadis for Nottingham, especially as the Citadis trams, which have been specially customised in the distinct and stylish NET tram brand, are becoming a more common sight on the city’s streets. The process of testing the Citadis and getting them into service is going extremely well and we look forward to a long and fruitful partnership with the City.”

The Citadis for Nottingham is 32 metres long and can carry up to 274 people. It is expected to have a 35-year lifetime, with a forecast annual mileage of around 90,000 km. Its maximum speed is 70 km/h and it has been specially designed to fit in with the pre-existing fleet of trams already operating in Nottingham.

The 22 new Citadis trams were built in Alstom’s facility in Barcelona. Alstom is in charge of their maintenance along with the 15 other trams, which are non-Alstom, already in service on Line 1.

Alstom has already sold over 1,800 Citadis to 47 cities across the world.