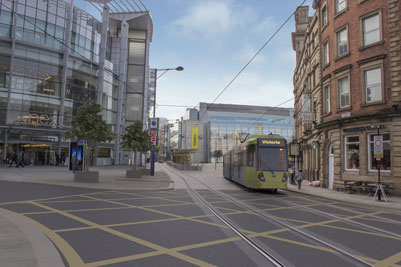 An artist’s impression of the new Metrolink Exchange Square stop in Manchester City Centre – now being built as an island platform to maximise public space in the area. The final design will be agreed with city officials

An artist’s impression of the new Metrolink Exchange Square stop in Manchester City Centre – now being built as an island platform to maximise public space in the area. The final design will be agreed with city officials

The works will ultimately boost the number of trams in and out of the city centre. The foundations of the first section of line will be laid between Victoria and Exchange Square, where there will be a new stop opposite Manchester Arndale.

Transport for Greater Manchester (TfGM) has been able to start work on this section of the new Metrolink line faster than expected after securing a £10.8m European Regional Development Fund (ERDF) grant earlier this year.

It means that trams could be running between Victoria and a brand new stop in Exchange Square as early as next winter (2015/16), which will also give Metrolink the ability to run more trams between Shaw And Crompton and the city, ahead of the whole Second City Crossing being completed in 2017.

An artist’s impression of the Exchange Square stop – now being built as an island platform to maximise public space in the area – has also been published ahead of the final design being agreed with city officials.

Councillor Andrew Fender, Chair of the TfGM Committee, said: “To see the start of construction getting under way so soon into the life of this project is hugely encouraging.

“I am really pleased we’re going to be able to bring the section between Victoria and Exchange Square into service so early, because it is going to be of huge benefit for businesses in a very popular and busy part of the city centre.

“It is a great example of the benefits the route as a whole will bring.”

The Second City Crossing is part of a co-ordinated three-year programme of works, known collectively as Grow, which will enable Manchester city centre to flourish for years to come.

Between now and 2017, the city centre will see more than £1bn of investment in projects to lay the foundations for continuing success by ‘future proofing’ the city’s transport infrastructure. Also under the Grow umbrella are a series of major regeneration projects. Together they add up to a wave of investment unprecedented since the mid-1990s.

Shoppers are being reassured that it will be largely business as usual as the city gears up to welcome millions of visitors to its festive attractions during the busy Christmas period.

Manchester’s Christmas markets are returning on November 14 with a larger than ever overall area, including a market on Exchange Square near the Selfridges and Marks and Spencer stores, while there will also be new sites including Cathedral Gardens.

Councillor Pat Karney, Manchester’s city centre spokesman, said: “Millions of people visit Manchester city centre every Christmas to come to our shops, restaurants and bars – and of course the world famous Christmas markets which this year will be bigger and better than ever.

“Once it’s completed, the Second City Crossing will make the city much easier for visitors and our rapidly growing population to get around. While this is major construction work, we are all working hard to avoid any inconvenience.”

Work to move pipes and cables away from the path of the new tramway has been under way since the start of the year and will continue along sections of the route for a number of months.

The full route starts in Lower Mosley Street and will run through St Peter’s Square, turn down Princess Street and head along Cross Street and Corporation Street to the new Exchange Square stop.

It will then run past the National Football Museum and Printworks to arrive at the Metrolink Victoria stop.

For more information about Grow and details of the constituent projects, visit www.manchester.gov.uk/grow.