First Glasgow, Scotland’s biggest bus company, has confirmed that it will invest around £7.4 million in 47 state-of-the-art green vehicles, with additional funding worth £1.3 million for the vehicles secured from the Scottish Government’s Green Bus Fund…

First Glasgow, Scotland’s biggest bus company, has confirmed that it will invest around £7.4 million in 47 state-of-the-art green vehicles, with additional funding worth £1.3 million for the vehicles secured from the Scottish Government’s Green Bus Fund.

The order includes a £2 million investment in four ‘virtual electric’ vehicles that run emission-free 70% of the time, and 30% on hybrid power. The virtual electric vehicles will operate emission-free in crowded, inner-city environments and use hybrid technology to recharge while in less densely populated areas, thereby reducing significantly kerbside emissions.

Falkirk-based manufacturer Alexander Dennis has won the contract to build the virtual electric vehicles, which will come fitted with free Wi-Fi and leather seats as standard, and are expected to be introduced into First Glasgow’s fleet in 2015.

First Glasgow will also order a further 43 ‘green’ vehicles worth almost £7 million. These are in addition to the 40 StreetLite Micro Hybrid vehicles, one of the world’s most fuel efficient buses, which started carrying customers across First’s operations in Greater Glasgow and Lanarkshire during the Commonwealth Games. 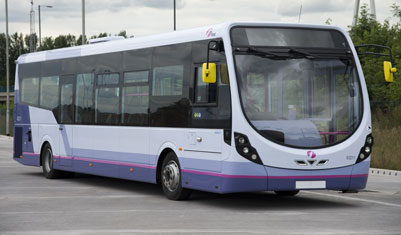 First Glasgow’s investment in these brand new buses will bring spending on new vehicles in just two years above the £37 million mark to a total of 226 new buses – all fitted with free Wi-Fi, leather seats and extra room for buggies and wheelchairs.

Fiona Kerr, First Glasgow’s Managing Director, commented: “The order of these brand new ‘green’ buses supports our determination to improve services and attract more people onto our buses. We are hugely excited at the prospect of welcoming Scotland’s first virtual electric buses into our fleet next year. This is very welcome news for customers travelling with First Glasgow. I’m very confident they’ll enjoy the benefits of smoother, greener journeys. Our StreetLite Micro Hybrid vehicles have been well received by customers since their arrival ahead of the Glasgow 2014 Commonwealth Games, and we look forward to introducing a further 43 fuel efficient buses into our fleet.”

Ms Kerr also recognised the contribution from the Scottish Government’s Green Bus Fund. She added: “The Scottish Green Bus Fund is a fantastic initiative and has helped First Glasgow and other operators invest in greener, more fuel efficient vehicles.”

Announcing the Green Bus Fund Awards, Transport Minister Keith Brown said: “This fund is helping our bus industry invest in the latest emission reducing technology and is another clear indication of our support and commitment to the bus industry in Scotland. The Scottish Government is committed to public transport and to our ambitious climate change target of reducing carbon emissions by 42% by 2020.” 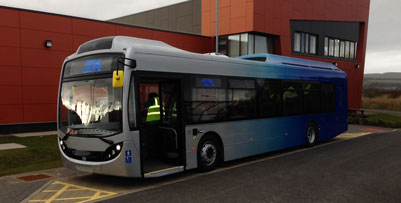 Glasgow’s pioneering virtual electric buses will be charged at each end of the route using wireless inductive charging.