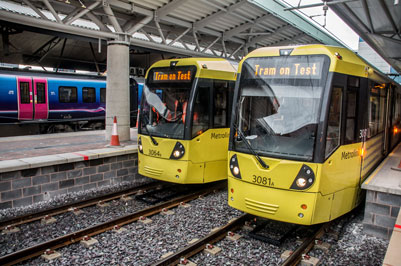 Services on Metrolink’s new line to Manchester Airport will open to passengers on Monday 3 November – well over 12 months ahead of schedule.

The final stage of a thorough pre-launch process will start on Monday 20 October when test trams will start to run out of service between Cornbrook and the airport every 12 minutes – which is how often trams will run on the line from launch.

Trams from the airport will run as far as Cornbrook initially, until Metrolink’s transformational Second City Crossing opens in 2017 and unlocks extra track capacity through the city centre.

Journeys from the Airport to Cornbrook, where passengers can connect with frequent services to stops across the network, will take around 45 minutes and will effectively double the number of trams running between St Werburgh’s Road and Cornbrook.

A driver’s eye view of the journey from Cornbrook (speeded up to take just 2.5 minutes) is available here: https://www.youtube.com/watch?v=EFxOjHgEgPo

A 300-space park and ride facility – free for Metrolink passengers to use – will open at the Sale Water Park stop, conveniently located just off Junction 6 of the M60.

Councillor Andrew Fender, Chair of the TfGM Committee, said: “Seeing our trams reach Manchester Airport more than a year ahead of schedule is a truly amazing achievement – and a game-changer for the communities set to benefit from its 15 new stops and frequent, fully accessible services.

“For Wythenshawe in particular, Metrolink will provide new and easier ways for people across Greater Manchester to reach the town centre and all it has to offer – as well as making it a more attractive place to live, work and do business.

“The arrival of the new town centre interchange next year will, of course, make it even easier still.

“For people already living along the line, it will provide new ways of getting to work, leisure, health and education opportunities.

“Because of that, it’s going to be a catalyst for great change and growth, and I am truly delighted we’ve been able to start that process so much earlier than we expected when we first started this very ambitious and challenging project.”

Councillor Jeff Smith, Manchester City Council’s executive member for housing and regeneration, said: “This new line will play a vital role in supporting the ongoing regeneration of Wythenshawe as well as making it easier for residents to access jobs and services at the airport and across Greater Manchester.

“The fact it’s opening a year earlier than originally planned is fantastic news for residents and businesses in Wythenshawe.”

Andrew Cowan, Chief Operating Officer at Manchester Airports Group (MAG), said: “Manchester Airport has seen considerable investment made in its ground transport options and the Metrolink will be an important addition to our services, bringing the airport and important projects such as Airport City closer to thousands of residents across Greater Manchester.

“Our passenger numbers are rising and we are adding more routes to exciting destinations such as Hong Kong and with growth of this scale comes opportunity and the Metrolink extension will be an important part in connecting people to the airport.”

The vast and varied nature of the construction of the new Line has also visibly demonstrated the UK’s technical and engineering excellence.

Major infrastructure for the new line, such as the bridges over the M56 and M60 motorways, and new tram stops and supporting systems and facilities, were delivered by MPT (a consortium of Laing O’Rourke, VolkerRail and Thales) employing specialist engineering expertise in a collaborative engagement process with all stakeholders along the route, whilst utilising offsite manufacturing techniques to help minimise the impact on local communities.

Footage of the M60 bridge installation is available here: https://www.youtube.com/watch?v=upeuM97TVRw

“Technical design and delivery of the new Airport Line has placed the most modern construction technology right in the heart of the community,” said Peter Jones, Project Leader, MPT.

“We’ve developed a close and productive working relationship between our delivery teams and TfGM, and the residents and businesses along the line, and I’d like to thank everyone concerned for their patience and understanding while the work was in progress.

“To see the line open a year earlier than planned is a very proud moment for our team.”

“This will be a tremendous boost for Manchester and we are proud to have played a key role in the successful delivery of this major infrastructure programme.”

The Airport line in numbers