Running at a speed of 20km/hr, the Keolis Downer vehicle uses 360-degree cameras and input sensors to avoid cars and other objects. 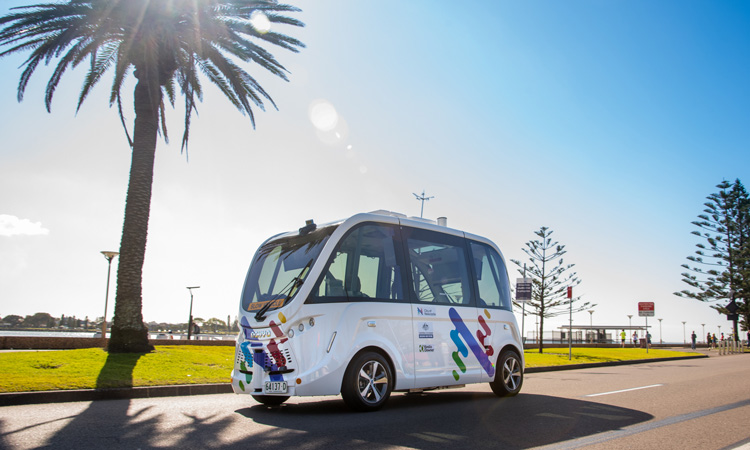 The first driverless vehicle to mix with traffic on Newcastle’s roads has started ferrying passengers along Wharf Road as part of a three-month, free-to-use trial.

The operation is overseen by an onboard local bus driver who greets passengers and answers questions after undergoing training to control the vehicle via a control pad should any issues arise.

“This is another milestone in Newcastle’s smart city journey as we trial the future of automated transport as part of the city’s ‘living lab’ experiment. With the help of Federal Government funding, the project will assess driverless vehicles in mixed traffic conditions and the role they can play in multimodal transport systems.

“Tourists will now be to be able to take in our magnificent harbour and foreshore and return home telling people they were among the first passengers in Australia on a shuttle with nobody at the wheel, or with no steering wheel at all in fact.”

COVID-19 has limited the number of passengers who can ride the shuttle to three at a time; and surface cleaning is being carried out across the day to keep everyone safe.

Shuttle operator Keolis Downer has invited more to take part in the trial by boarding on Wharf Road just east of the Watt Street roundabout or at Nobbys Beach.

“We encourage Novocastrians to come to Wharf Road and take a ride to experience the future of transportation using this technology,” Keolis Downer Hunter General Manager, Mark Dunlop, said.

“We are very interested in the public perception around this technology and will be asking for further feedback after receiving a large number of responses to a survey last November when the shuttle was on show during the Newcastle 500.

“Passengers can be assured of the safety of the vehicle and the training of our onboard chaperones who have additional qualifications to their skills as bus drivers.”

“Through Keolis, we have been operating driverless shuttles since 2016 in Lyon, France. The shuttle is now an integral part of the multimodal network. We are keen to accelerate the deployment of this technology in Australia, and better understand the role autonomous shuttles can play in people’s door to door journeys,” added Keolis Downer CEO, David Franks.

The trial is being funded through a $5 million grant awarded to the City under the Federal Government’s Smart Cities and Suburbs Program.

How can autonomous vehicles contribute to sustainable mobility planning?