Passenger comfort is a priority for Moscow Metro

The modernisation of stations and passenger comfort have become priority guidelines of Moscow Metro over recent months. During this time several big infrastructure projects have commenced and will soon be finished. Head of Moscow Metro Dmitriy Pegov guides us through the important work that has been carried out for the improvement of providing quality passenger services… 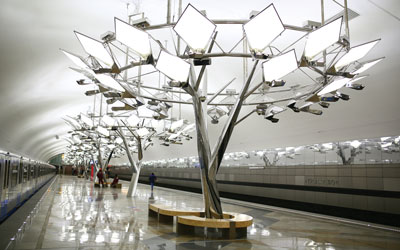 At the beginning of the 1990s, our metro seemed to have forgotten about its passengers. More than two decades have now passed and of course it is very difficult to change the system and satisfy the requirements of time, but passenger comfort has become a priority for us.

Renovation and beautification of stations For many passengers, the first thing they think about of Moscow Metro is its stations. Moscow Metro started the realisation of an ambitious transformation programme in 2014 in order to make stations more comfortable and secure. In the framework of this project, front of station buildings were renovated, escalators were repaired, entrance halls enhanced and underground crosswalks improved. During 2015, remedial works will take place at 96 Moscow Metro stations.

The infrastructure of the underground crosswalks is also being renovated for passenger comfort. They will be entirely altered; wall coverings will be changed, utility systems will be replaced, plus waterproofing systems and navigation elements will be upgraded. Furthermore, anti-parking systems in the shape of concrete semispheres will be installed at station entrances.

Shops, shopping malls and automated trading zones will be organised in under ground crosswalks after the reconstruction. A civilised trading environment will be created near metro stations and other transport modes which will help people to feel more comfortable in the city.

The most ambitious works (replacement of escalators) is currently being carried out at Baumanskaya Station. Until recently, passengers at this station had to use the oldest escalators in the world. These escalators were installed at the beginning of the 1940s and have completely exhausted their performance potential. In recent years, specialists have had to spend time carrying out maintenance works in order to increase their efficiency. Baumanskaya Station is currently closed for 11 months so that major repairs can be carried out; during which time full replacement of the escalator system will be achieved with four modern escalators replacing the three old escalators. The carrying capacity will be increased to 7,500 passengers per hour.

Alongside the installation of modern escalators with stainless balustrades and better technical specifications at Baumanskaya Station, major repairs to the entrance hall will take place, with the installation of new ticket windows as well as the renovation of all security systems, utility facilities, cables, sanitary and ventilation systems, plus the cosmetic repair of the above-ground entrance hall.

Regarding Moscow Metro’s development, I want to highlight that we will practically double the number of kilometres on our network up to 2020. The metro extension project commenced in 2011, and by 2020 the plan is to construct 160km of lines with 78 new stations – 14 stations have already opened.

Soon to open is Kotelniki Station, which will be the second to open after Myakinino Station situated within the Moscow region. This station will be used by citizens of towns in the Moscow-area such as Kotelniki, Luberzi, Dzerzhinskiy, who currently need to use surface transport in order to reach Zhulebino Vikhino stations.

Kotelniki Station will become the lightest station of Moscow Metro. Red marble and granite produced in Russia were used in itsdesign . Improved conditions for passengers with reduced mobility will also be evident at the station with new navigation and tactile panels for people with visual impairment, plus the installation of ramps to help people with limited mobility. A so-called ‘thermal envelope’ will be installed at the station’s stairs for passenger convenience which includes a heating system that will prevent the build-up of ice on the stairs in winter.

Furthermore, a new cashless ticketing system will be installed at Kotelniki Station, as well as free Wi-Fi connection within the station and entrance hall.

Many Moscow Metro stations currently suffer with full-capacity. In order to decrease pressure on the Circle Line and some radial line stations, several projects in collaboration with the Department of Transport and Road Infrastructure Development of Moscow are planned.

Moscow Circular Railway stations will be located near Moscow Metro stations, with some of them being connected by heated underground and above-ground walkways. On average, it will take passengers 3-5 minutes to make the transfer from one type of transport to another.

A new model of noiseless and eco-friendly electric train cars were manufactured for the Moscow Circular Railway which will also increase passenger comfort and security. By passenger request these trains will be equipped with climate control systems, updated hand-rails and side benches, bio toilets and free Wi-Fi.

Another important direction for Moscow Metro is to increase the level of passenger comfort. Currently, Moscow Metro is integrating a new, modernised navigation system. This innovation will contribute to comfortable passenger transportation. This updated navigation system is already used at 75 stations. Along with information about nearest streets, the signs also show the number of exits. Special ‘information-blocks’ showing Moscow Metro maps and city streets appear in entrance halls.

In the near future we plan to install special desks at platforms where passengers will have the opportunity to look at maps and plans of the surrounding areas, the exits to the nearest places of interest as well as information about bus and tram routes.

Moscow Metro is also developing the system of its reference and information services. In December 2014, the first informational desk ‘Live Communication’ was installed at Komsomolskaya Station. This desk has a special interactive panel which passengers can now use to send their claims and suggestions directly to Moscow Metro executives. Such panels will be installed at all 11 Circle Line stations.

Since 1 January 2015, free Wi-Fi access has been in place on all lines of the Moscow Metro – a very popular service among passengers. Every day more than one million passengers use this service. The amount of connections has succeeded all expectations. That’s why we had to increase network capacity from 10GB to 17GB. Every train has connection with the network at the speed of 100MB. It is a unique commercial project which was realised without government financing. Pay back was achieved via advertising that is shown to Wi-Fi users.

In 2013, the Passenger Mobility Centre was opened, available on 87 stations. Since then, 240 specialists have helped more than 300,000 passengers with their queries of support by phone and the Internet. All services are free.

‘We take care of you’

Moscow Metro takes care of its passengers health. In 2015, a special programme of passenger support during hot days has been carried out. If the temperature at stations reaches 38 degrees or more, Moscow Metro staff will distribute free drinking water, wet towel wipes and hand fans. The label on the bottle of water has the Moscow Metro logo and slogan, ‘We take care of you’.

Today Moscow Metro is the most beautiful, secure and intensively developed transport organisation in the world. However, works to make it even better don’t stop – not even for a minute.

Dmitriy Pegov began to work on the railroad in 1994, and for over 20 years has been promoted from a Train Assistant driver to the General Manager of the Directorate for High-Speed Operation – a branch of Russian Railways – where his responsibilities included the organisation of passenger speed and high-speed services in Russia, the operation and maintenance of high-speed trains, the operation and maintenance of staff training and the implementation of activities aimed to reduce the cost of passenger transit. Dmitriy supervised the launch of the first high-speed ‘Sapsan’ train service between Moscow and St. Petersburg, the Allegro train service between St. Petersburg and Helsinki, and the launch of the electric train ‘Lastochka’ service in a number of directions throughout Russia. Dmitriy holds two higher education degrees. In 1997, he graduated from St. Petersburg State Transport University as an engineer-electrician for locomotives. In 2013, he graduated as a Lawyer from the State University – Higher School of Economics with a Science of Law degree. Furthermore, Dmitriy has diplomas in qualification improvement and retraining for managers and specialists under the program ‘Public Transport and Operational Safety’ and also holds a MBA degree from the St. Petersburg State Transport University. On 22 July 2014, Dmitriy Pegov was appointed the Head of Moscow Metro.