The first series-produced, fully electric bus is now in service in Vienna 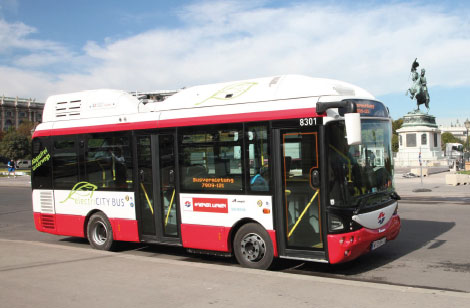 The first electric bus (eBus) for the Austrian capital city of Vienna, supplied by Siemens and Rampini, has been brought into service by “Wiener Linien”, the municipal public transit company. This vehicle is the first of twelve with which the Vienna public transportation company intends to switch two of the city’s bus services completely to electric power by the summer of 2013. At the terminal stops at each end of the line, the electric bus draws in the power it requires through a roof-mounted pantograph, and stores it in its batteries within 15 minutes. The bus also recovers its braking energy, and has a range of between 120 and 150 kilometers. 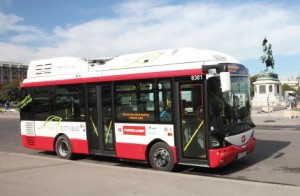 Siemens created the innovative solution and drive technology for the twelve electric buses. The first series-produced, electric design was realized in cooperation with the bus manufacturer Rampini. The entire energy requirement is stored in the onboard battery system. The batteries also supply the heating and air-conditioning systems. The main advantages over diesel and gas-powered buses lie in the energy demand, which is around 25 percent less, lower maintenance costs, and completely emissionsfree operation.

Siemens developed and supplied the drive and control system for the bus. At each terminal bus stop, electricity is drawn in through an elevating, roof-mounted pantograph. The charger is installed in the bus. The batteries can be recharged within 15 minutes, and provide a range of between 120 to 150 kilometers. The energy regained from braking is regenerated through the three-phase motors, and fed back into the lithium ferrite batteries. At night, the batteries are recharged slowly with 15 kilowatts in the bus depot. The battery capacity is 96 kilowatt hours.

The compact low-floor bus can carry up to 40 passengers, and its top speed is limited to 62 kilometers per hour. The bus itself does not emit any CO2, and is almost silent.

Wiener Linien has won the “EBUS Award” for its operating concept. The EBUS Award is an environmental prize for urban public transport buses that is presented by the German Forum for Transportation and Logistics. Some 50 operators had entered the seven-category competition. Wiener Linien was chosen because it was the first operator to implement and integrate eBuses into scheduled service in Europe.

One response to “The first series-produced, fully electric bus is now in service in Vienna”