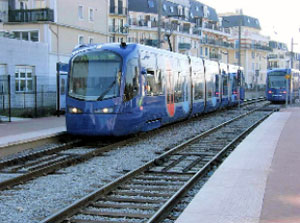 Tram-Train in operation in Paris

Public transport chief Geoff Inskip has urged the government to invest millions of pounds into tram-trains.

Tram-Train in operation in Paris

He called on the Department for Transport to set aside £100 million a year from the savings identified in the McNulty Report into improving efficiency in Britain’s rail industry to develop tram-train networks across the country.

Tram-train is a light-rail public transport system where trams are able to run on an urban network and on mainline railways shared with conventional trains.

Mr Inskip is chief executive of Centro, the integrated transport authority for the West Midlands.

He is also chairman of UK Tram, the forum representing Britain’s tram industry and recently outlined the case for tram-trains to the All-Party Parliamentary Light Rail Group.

He said: “Tram-train is a brilliant concept ripe for development – it combines the tram’s flexibility and accessibility with a train’s greater speed, and bridges the distance between main railway stations and a city centre.

“It is why I say the Government should set aside £100m per annum from those savings they will be making from McNulty and ring fence that money for tram-train.

“In this way we can get on with delivering the Department for Transport’s agenda of delivering a better value for money railway and a greener more sustainable economy.”

Work has begun on a national tram-train pilot scheme between Sheffield and Rotherham which is due to begin operating in 2015.

Mr Inskip said it was essential that transport authorities developed similar projects elsewhere around the country.

“In the Centro region alone we have three possible applications – Wednesbury- Stourbridge, Walsall-Wolverhampton and Walsall-Wednesbury,” he said.

“By starting work now in other parts of the country the successful outcomes of the national trial can be immediately captured without prolonged interruptions for lengthy project development stages.”

Mr Inskip said tram-trains were efficient because operating costs were generally cheaper than those of conventional heavy rail services.

They offered opportunities for better connectivity because they were able to utilise spare rail capacity on existing corridors and former rail routes, and also reduced pressure on the local rail network.

“Tram-train is a fundamentally proven concept and early introduction is required – the benefits are too great for the opportunity to realise them to be missed,” Mr Inskip said.