Level 4 autonomous driving is achieved for the first time in a fuel-cell electric car, as Hyundai completes a 190km test drive ahead of plans to commercialise the vehicle in 2021… 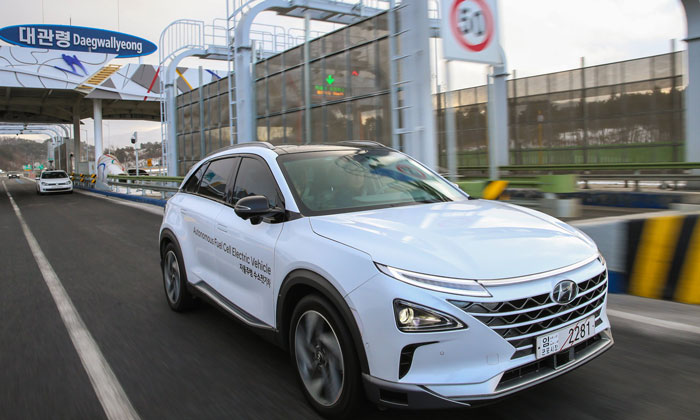 Hyundai Motor Company’s fleet of next generation fuel-cell electric cars have succeeded in completing a self-driven 190km journey from Seoul to Pyeongchang.

This is the first time in that level 4 autonomous driving has been achieved with a fuel-cell electric car. Previously, autonomous driving was only demonstrated at a limited speed on particular sections of domestic roads. Hyundai has surpassed this with their long-distance drive at 100-110km/h, the maximum speed allowed by law on Korean highways.

Five vehicles completed the test journey, three of which were based on Hyundai’s next-generation fuel-cell electric SUV NEXO and two were Genesis G80 autonomous vehicles. All the vehicles are equipped with level 4 self-driving technology and 5G network capabilities.

When on the highway the vehicles moved in response to the traffic, successfully accomplished lane changes, manoeuvres and toll gates. The incorporation of advanced technologies within the cars has enabled them to recognise their surroundings and other vehicles more accurately, make better judgements at junctions, calculate widths and positions and precisely pinpoint the vehicle’s position on a map.

Hyundai conducted a significant number of highway test drives amounting to hundreds of thousands of kilometres travelled; accumulating a vast amount of data that helped enhance the self-driving performance. Adding a small number of sensors to mass produced vehicles has enabled the realisation of fully autonomous driving technology, and thus brings the company a step closer to the commercialisation of self-driving technology.

“Hyundai’s philosophy for developing autonomous driving technology is to provide the highest level of safety combined with a high standard of convenience that our customers expect,” said Jinwoo Lee, Head of the Intelligent Safety Technology Center at Hyundai Motor Group.

The fuel-cell electric model is able to produce electricity through a reaction between hydrogen and oxygen in the fuel-cell stack. The NEXO fuel-cell electric SUV can drive more than 600km on a single charge, which takes approximately five minutes. The model boasts efficiency of 60 per cent, durability equivalent to internal combustion engine-driven vehicles and a load space of 839 litres.

Passengers in the rear seats can use ‘Home Connect,’ a car-to-home technology which enables the user to access and control devices installed in their smart home. Also incorporated is ‘Assistant Chat’, a technology that allows users to ask questions to a Chat Bot with simple voice commands and receive answers in the form of text or images, and ‘Wellness Care’ which can monitor passengers’ health information, such as their stress level, heart rate and mood state.

These advanced infotainment features enable drivers to make the best use of their time spent in autonomously driven vehicles, making them more than a simple means of moving from one location to another.

Hyundai is preparing for the commercialisation of the SAE standard level 4 compliant autonomous-driving system in smart cities by 2021 and plans to commercialise the technology for fully autonomous driving by 2030.