In line with the city council’s Madrid 360 Environmental Sustainability Strategy, EMT Madrid’s 100 per cent clean fleet will be made up of a combination of compressed natural gas, electric and hydrogen buses. 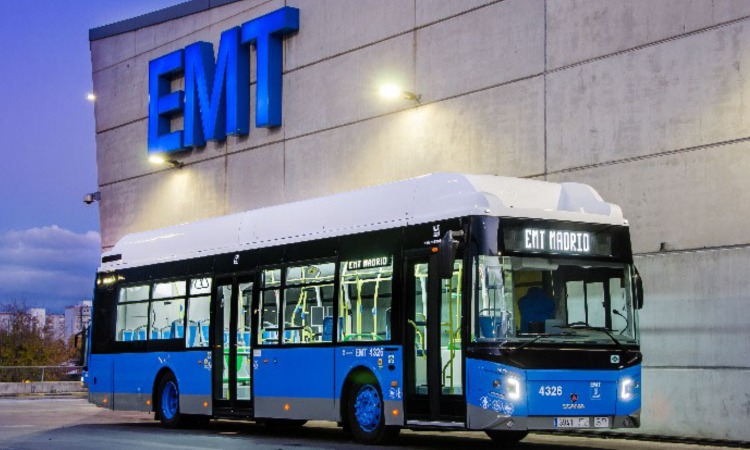 The Empresa Municipal de Transportes de Madrid (EMT Madrid) has announced that its last diesel bus had turned off its engine forever in December 2022, making Madrid the first major European capital -in terms of the number of inhabitants and buses in service- to operate a 100 per cent clean fleet of municipal buses.

The municipal company has acquired 1,291 new and clean buses to renew 60 per cent of the fleet. With the withdrawal of the last diesel bus, EMT Madrid’s current 100 per cent clean fleet will be made up of 1,915 compressed natural gas (CNG) buses and 180 electric buses. In addition, the municipal company will incorporate the first 10 hydrogen buses and another 150 new electric ones in 2023.

Having a modern fleet, 100 per cent clean and equipped with the latest technological innovations is one of the key objectives of the City Council’s Madrid 360 Environmental Sustainability Strategy and one of the axes of the EMT Strategic Plan until 2025.

EMT Madrid has had the support of the current government team, resulting in a progressive electrification that will reach 25 per cent of the municipal fleet in 2025. For this purpose, the company’s Operations Center in La Elipa, which has capacity for 318 buses, is preparing to become a reference centre for 100 per cent electric fleet management, equipped with a photovoltaic installation designed for supply.

In addition to emphasising electrical energy, the EMT Strategic Plan 2025, presented at the beginning of 2022, also contemplates the incorporation of green hydrogen in to the fleet. Thus, the arrival of 10 fuel cell buses powered by this clean energy source is scheduled for 2023.

In total, investment in new less polluting municipal buses or zero-emission models will reach €534 million between 2021 and 2025. This amount is in addition to the €77.34 million that has already been invested in 2020 for the acquisition of more sustainable vehicles.

Until 1994, the entire EMT Madrid fleet (1,862 vehicles) consisted of diesel buses. In that year, purchases of the first models powered by CNG began and now they make up the majority of the Madrid fleet.

Currently, EMT Madrid has 19 zero-emission lines, making Madrid the city with the most electrified lines in Spain. In May 2021, EMT Madrid had awarded the largest electric purchase in its history, which included 150 buses, for a total of €81 million, which, in part, had been financed by Next Generation funds. In 2025, 25 per cent of the municipal company’s buses will be electric.