The Mayor of Cambridgeshire and Peterborough, Dr Nik Johnson, has called for a regional transport network that is shaped by ‘Compassion, Co-operation and Community’. 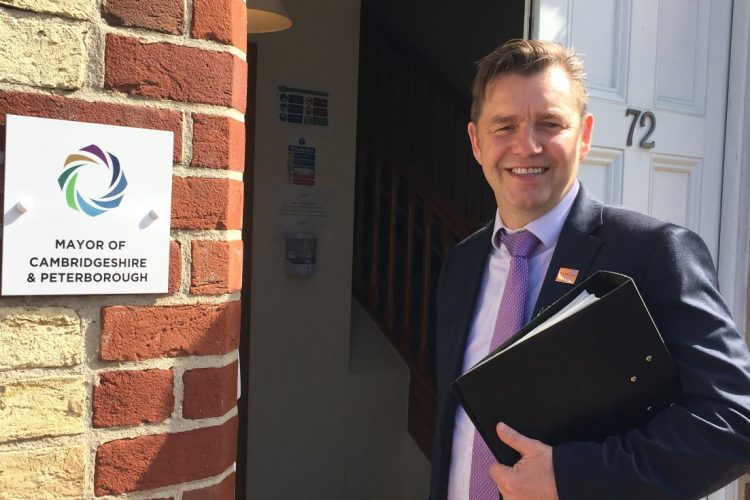 Prioritising left behind communities, tackling inequalities and accelerating carbon reduction will form part of a renewed strategy for better transport across Cambridgeshire and Peterborough in the UK. At its meeting on 28 July 2021, the Cambridgeshire & Peterborough Combined Authority Board agreed to proceed with a reinvention of the transport strategy in the region through a revamped Local Transport Plan (LTP). An update on the work will be brought back to the Board in September 2021.

Work to deliver the Cambridgeshire Autonomous Metro (CAM) programme has already been suspended. The Combined Authority Board approved that the work of the delivery body One CAM Ltd is suspended until a comprehensive review of the CAM programme is carried out and until the update on the LTP renewal work is reported to the Board in September 2021. At that meeting, the Board will be asked to agree on the next steps for the CAM programme’s future, as well as deciding on the further use or permanent closure of delivery body One CAM Limited.

However, as part of the LTP work, learning from the CAM – including potential technologies, insight on zero-carbon journeys and shifting people away from private car use – can help to inform transport improvements that will offer most benefit to communities.

The Mayor of Cambridgeshire and Peterborough, Dr Nik Johnson, said in his 2021 election campaign that a multi-billion-pound CAM system would not be deliverable or bring improvements to where they were needed most. He said that a major rethink was needed on how transport can level up areas which suffer most from deprivation and inequality, such as in Fenland and Peterborough.

Johnson said that his values of ‘Compassion, Co-operation and Community’ should underpin a fresh approach to the Combined Authority’s transport strategy. Allied to this, a strong ‘greenprint’ running through the strategy, which will include linking the work of the Cambridgeshire and Peterborough Independent Commission on Climate. In June 2021, all 31 of the Commission’s recommendations for being a net zero carbon region by 2050 were passed by the Combined Authority Board.

The report to the Board highlighted the need for focus on communities that are deemed left-behind. Priorities will include: making transport a driver for social mobility and better health and wellbeing; transport should deliver cleaner air and encourage more active travel, like cycling and walking; and transport must support the future vitality of communities, including proper public transport for villages and estates.

Work is also taking place on a Bus Service Improvement Plan, with Johnson already highlighting the need to explore the potential of franchising and how it could make a transformational impact on connectivity for people and places.

Collaborative working will also form an important part of the new transport approach, especially with the Greater Cambridge Partnership (GCP). Part of the LTP revamp will see a specific focus on supporting the GCP’s work on developing ways to improve journeys across the Cambridge city centre.

More detail on the specific transport investments resulting from this new approach will be tested with the public through consultation on the LTP, which planned for autumn 2021.

Mayor Dr Nik Johnson said: “I want to build a transport system shaped by ‘Compassion, Co-operation and Community’. We can show compassion by investing in areas which, for too long, have been left behind. This is a moral question – a lack of good transport causes real harm. It holds places back, cutting people off from better jobs, services and social contact. It results in poorer public health and wellbeing and, worst of all, lower life expectancy. We must work to a plan which puts the success of left behind areas first.”

“Co-operation is about working with our partners. The GCP has hundreds of millions of pounds to improve transport in Greater Cambridge – we should be working closely so that its investments link with a strategy for the rest of the county. In particular, we will work together on the challenge of improving journeys across the Cambridge city centre. Collaborating with local councils, with government, with East West Rail, with bus and rail operators and with colleagues across borders is also vital in creating a transport system which recognises the interests of all our partners. This will, of course, remain a plan for the whole region, with an aim to develop one of the smartest, most joined-up transport systems in the country. A demand responsive transport trial in St Neots and Huntingdon, and journey improvements around St Ives, are just two examples of our approach which will invest where it is most needed,” he added.

Johnson continued: “And it is too easy to forget about the untapped potential of buses for better connecting communities, and helping to reduce the weight of transport’s carbon footprint. We must look at buses with a fresh eye, one that will fully explore the potential for a franchised system which makes services work better for people and places, and cleaning up air with emission-free journeys. What I want to see are effective, deliverable projects that accelerate our journey to net zero carbon, and that make a difference to people’s lives.”

“My third ‘C’ of community is about improving the vitality, health and prosperity of places. Transport infrastructure is a key lever for social change, for beating unfairness, for improving health, wealth and wellbeing and safeguarding our precious environment. I don’t think that transport can aspire to any higher aim than that,” he concluded.

Since the publication of the LTP in January 2020, there have been many changes to the transport landscape. That includes the Combined Authority’s approval of the initial recommendations of the Cambridgeshire and Peterborough Independent Commission on Climate Change, new CO2 and electric vehicle targets published by the UK government, including its Decarbonising Transport document, and the changes in travel caused by COVID-19. The development work on the revamped plan will take these changes into consideration.