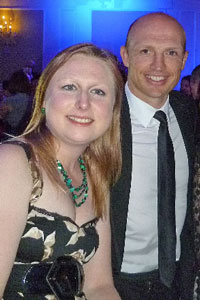 A Centro employee who manages the public transport network across Dudley, Sandwell, Walsall and Wolverhampton is toasting success after picking up first prize in a prestigious award.

Babs Coombes, the transport authority’s Black Country area manager, beat off competition from four other women to be named rising star of the year at the Women First Shine Awards.

Her work during an overhaul of bus services in Sandwell was praised after negotiations with operators led to several improvements for passengers while also achieving savings in taxpayers’ subsidy.

Attendees also heard that in 2010 after a commercial bus route in Wolverhampton was withdrawn Babs worked hard to fill the void and secure a much needed service for elderly residents in the area.

This 61 bus route has since proved so popular that it now receives more than 100 passengers each day and those who use the service refer to themselves as the “61 club”.

Babs said: “I am so pleased and proud to have won this award. It is amazing to have been recognised in this way by women in the travel, tourism and hospitality industry across the UK for doing a job which I love.

“I am really passionate about making public transport better for people living in the West Midlands, and enjoy working and meeting with so many different people across the area.

“No two days are ever the same and I feel very lucky just to have the opportunity to do my job so winning the Women First Shine Rising Star award really is the icing on the cake.”

Babs joined Centro as a media officer in 2003 before being selected for its two year talent programme.

After completing the scheme she was chosen to take on the role of Black Country area manager working to improve services and negotiating the best deal for passengers throughout the area.

The Women First Shine Awards, which was presented by former England rugby star Matt Dawson, has been recognising the achievements of women working in hospitality, passenger transport and travel and tourism since 2009.