Buses in the Hungarian capital will be sprayed with the coating, which reacts with light to kill pathogens and lasts for up to a year, according to manufacturers Resysten. 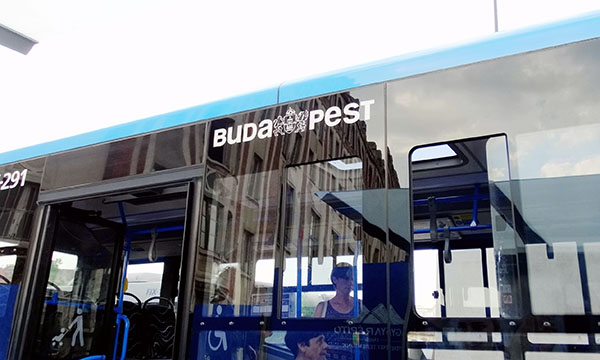 These buses in Budapest will get a new coating which manufacturers claim kills pathogens.

VT-Arriva, one of the biggest transit operators in Hungary, has signed a deal with Resysten, a company that manufactures an anti-Covid-19 coating that protects surfaces from the spread of coronavirus, to apply their product to the fleet of 450 buses operating in the Hungarian capital.

Resysten claims that every surface on the buses will see a decrease of up to 99.9 per cent in the presence of pathogens that allow the coronavirus to spread, with the protection remaining active for up to a year, significantly increasing safety for both passengers and staff.

The Hungarian company has already supplied the coating to Budapest’s Ferenc Liszt International Airport, as well as treating the 27km of escalator handrail in Budapest’s Metro network and over 700 of its vehicles.

VT-Arriva, which operates routes across Budapest, is not the first transit company to use anti-Covid-19 coating on its services. The Prague Public Transit Company (DPP) and Hong Kong International Airport have both experimented with sprays to combat the virus, with the latter even disinfecting passengers in special pods.

The coating, which was developed during the SARS outbreak in 2003, works by producing hydrogen peroxide upon contact with light, killing any pathogens present. Resysten says its coating has been developed to integrate into any surface on a molecular level, meaning that it cannot be removed by conventional cleaning methods and so it remains active for up to a year.

Shajjad Rizvi MBE, Resysten’s CEO, was excited by the new partnership: “We are very proud to welcome VT-Arriva as our newest client. As one of the leading public transport companies in Europe, we understand the importance that they put into passenger and staff safety, and we’re grateful that they’ve put their trust in us to take that safety a step further with the application of Resysten to their fleet of buses. Our priority rests with helping affected industries in their fight against the novel coronavirus in both the public and private sectors; working with VT-Arriva is an exciting opportunity to continue moving in that direction.”

“We have to of course reiterate that Resysten is an additional solution that significantly reduces the risk of the spread of coronavirus on surfaces, but it’s not a cure – and it will only work at its most effective if people continue to be vigilant and taking precautions such as wearing masks, maintaining social distancing and basic hygiene rules such as regularly washing your hands. We’re all in this fight together.”