Metro train No. 100 delivered to Oslo

Siemens delivered its 100th metro train to Oslo, ten years after the signing of first contract for what has meanwhile become the biggest metro order in the history of the company… 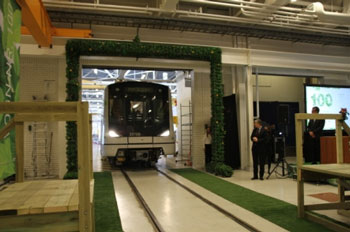 Yesterday Siemens delivered its 100th metro train to Oslo, the capital of Norway, ten years after the signing of first contract for what has meanwhile become the biggest metro order in the history of the company. At the handing-over ceremony Sandra Gott-Karlbauer, CEO of the Urban Transport Business Unit, said: “When the last units are delivered next spring, the entire metro fleet will then comprise 115 model MX300 three-car trains. This fact alone is well worth mentioning – because it gives Oslo the world’s biggest uniform Siemens metro fleet! It’s a true success story we can be proud of!”

“This is a big day because it is setting a milestone for public transportation in Oslo. The Siemens cars have proven to be a tremendous success ever since they went on the rails in Oslo. They’ve made a positive contribution in terms of the punctuality, operating safety and efficiency of the metro,” says Cato Hellesjø, managing director of the operating company Kollektivtransportproduksjon AS (KTP).

The new metro trains have boosted annual ridership to 82 million passengers, which amounts to an increase of 26 percent. The number of trips has risen 30 percent, and the metro is now registering 290,000 passengers per day. Assuming that each passenger rides the metro twice a day, this means that 145,000 people are taking advantage of the transit service every day. This equals about one-quarter of the population of Oslo. Much shorter waiting times and a punctual service rate of 99.7 percent are strong reasons why more and more people are now using the metro.

“The good collaboration between Kollektivtransportproduksjon and Siemens is a major factor for this success,” summarizes Cato Hellesjø.

“What makes us happiest – of course – is that our customers are happy with Siemens. Your passengers are pleased and their numbers are growing – clear signs that we are effectively meeting their needs. And I am confident I can say that we at Siemens have won – and kept – the customers trust over the years,” Sandra Gott-Karlbauer said.

The complete train was designed by Porsche Design (Zell am See, Austria).

The metro vehicles were manufactured at the Siemens plant in Vienna and are built for the harsh winter conditions in the Greater Oslo region, where temperatures can fall to minus 25 degrees Celsius. For this purpose, the trains not only underwent testing in the climatic wind tunnel at Vienna’s Rail Tec Arsenal, but also completed extensive test runs under real operating conditions for winter service.

The three cars of the 54-meter-long train are connected by means of gangways. The interior can accommodate 680 passengers. The aluminum carbodies are provided with three doors on each side. In addition, the trains are designed to operate at a maximum speed of 80 km/h. Each train covers an average annual mileage of 120,000 kilometers. With an expected lifetime of 40 years, the trains will travel a total of 4.8 million kilometers.

By returning the braking energy to the supply, the train ensures the recovery of up to 46 percent of its power consumption. This is an optimum precondition for passenger service because the rail vehicles operated by the city’s transit authority are supplied with alternative and above all renewable energy. Today, the city’s metro system – called Oslo T-bane – totals around 80 track kilometers and consists of six lines.